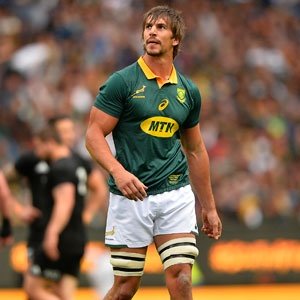 Legendary Springbok locks Eben Etzebeth and Bakkies Botha have been included in top 10 lists of the “hardest rugby players who ever lived”.

Two northern hemisphere rugby legends, Stuart Barnes and Graham Price, were asked to pick their 10 hardest men to ever play the game.

Via a column for The Times, Barnes, a former England flyhalf and nowadays a renowned commentator, included Etzebeth at No 5 on his list.

Price, a legendary former Wales and British and Irish Lions prop, wrote a column for the Wales Online website and included Botha and Etzebeth at Nos 9 and 10 respectively.

Describing Botha, Price wrote: “In an era when it has been more difficult to ‘assert yourself’ as a hard man because there are so many TV cameras around these days, he was still able to stand out as the Springboks’ enforcer for a decade.

“Let’s just say he was able to keep the tradition going of the hardest of South African second rows. Botha helped beat up the Lions in 2009 in what were brutal modern-day Test matches.”

Price added: “Etzebeth is another who never took a backward step. He learned so much from watching Botha and they used to say he was ready to fight anyone – including the referee.”

US may have to endure social distancing until 2022 if no vaccine is quickly found, scientists predict

US may have to endure social distancing until 2022 if no vaccine is quickly found, scientists predict