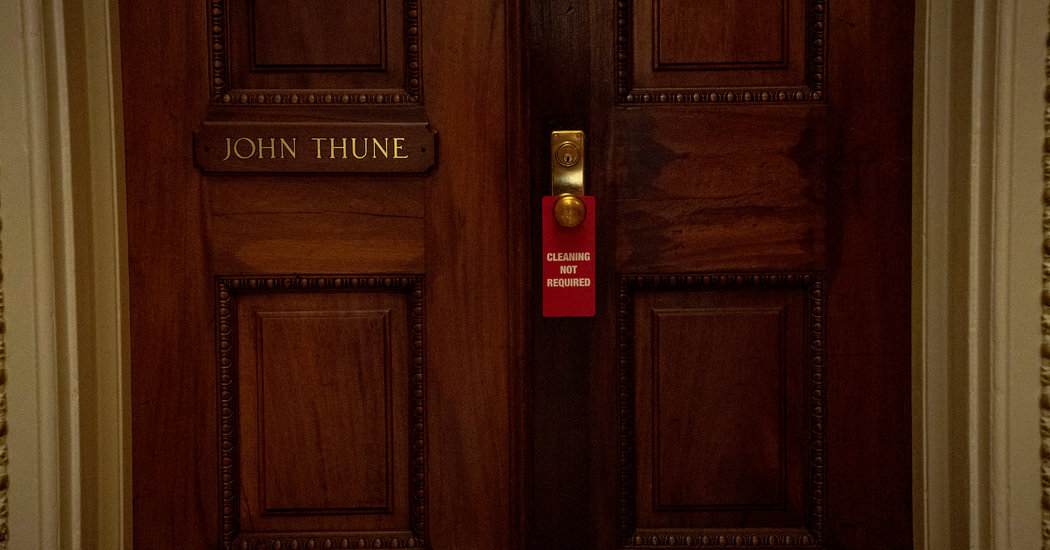 Beyond voting, Mr. Portman and others want remote hearings and legislative debate.

Good-government advocates see the moves as an imperative. Without a way to meet remotely, the House and Senate have no way to conduct oversight or act as a check on President Trump, who was impeached on charges of abuse of power and this week declared he had “total” authority to supersede governors’ decisions about whether to reopen their states.

“The choice is remote Congress or no Congress,” said Daniel Schuman, the policy director of Demand Progress, a progressive organization that advocates government transparency and accountability. “And if you have no Congress, you have what our founders feared most, which is an executive branch with no legislative check.”

Ms. Pelosi has repeatedly dismissed the idea of remote voting, and did so again last week after a bipartisan group of House members called the Problem Solvers Caucus issued an open letter to leaders outlining a suite of options, including installing voting machines in lawmakers’ districts.

“We’re not there yet,” Ms. Pelosi told reporters, “and we’re not going to be there, no matter how many letters somebody sends in, with all the respect in the world for that.” Still, Ms. Pelosi left the door open a crack, saying that she hoped “the blessings of technology will give us more options sooner to review.”

Some lawmakers and aides have been briefed in recent days on a secure online voting tool that mimics the electronic card system used by the House, developed in response to the coronavirus crisis by a small technology start-up called Markup.Law.

“We think what they should do is to seriously start evaluating systems like ours, because this is going to go on for a while,” Joel Rothstein, the company’s chief executive officer, said in an interview.

In the House, any update in the means of voting would require a rules change, which itself would require an in-person vote. Mr. Schuman’s group, which is keeping track, says 111 House members and 18 senators are on the record supporting remote voting. Representative Steny H. Hoyer, Democrat of Maryland and the majority leader, said in a recent interview that he was rethinking his earlier opposition to remote voting, which he had previously dismissed as setting “a bad precedent.”