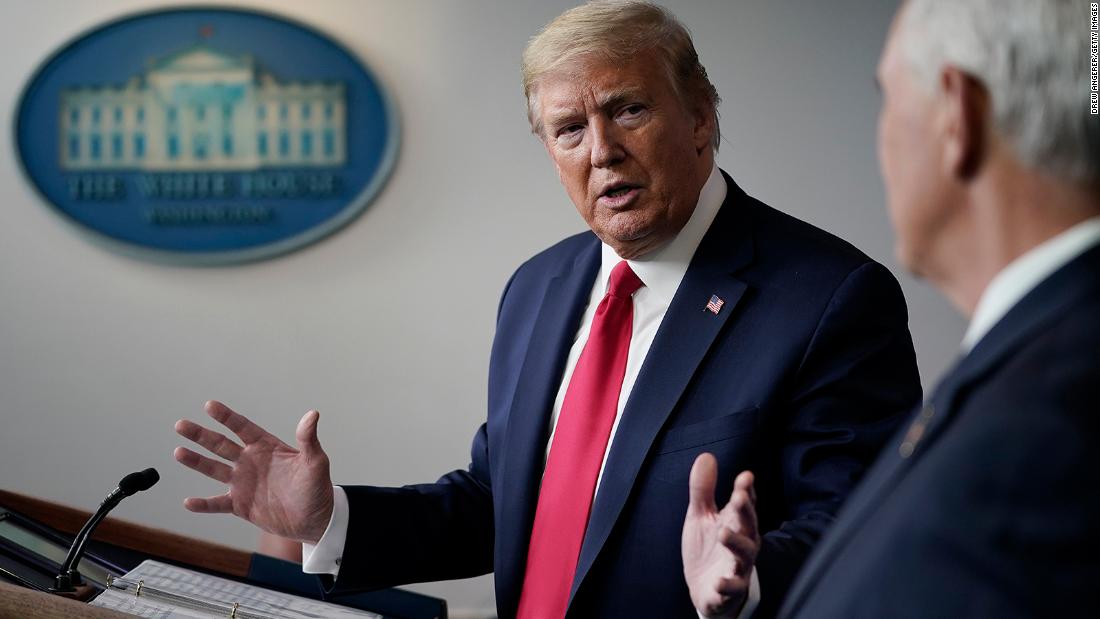 Trump also continued to embellish about House Speaker Nancy Pelosi’s February 24 visit to San Francisco’s Chinatown, inaccurately saying that she had held a Chinatown “rally.” He continued to insist that his travel restrictions on China were a “ban,” though they contained significant exemptions. And he threw in an old false claim about Michelle Obama for good measure.

Trump bragged about the level of coronavirus testing in the US and played down criticism from medical professionals that there still isn’t enough testing to get a handle of the pandemic.

“Ultimately, we’re doing more testing, I think, than probably any of the governors even want,” Trump said, suggesting that his administration was leading the way on coronavirus testing.

Trump later said that “not everybody believes as strongly as some people on testing.” And suggesting that calls for more testing are some sort of partisan plot, he claimed that “some people want (us) to do testing because they think it’s impossible for us to fulfill that goal.”

Facts First: Trump is off the mark. There have been bipartisan calls from governors and medical professionals for the Trump administration to ramp up testing and give states the supplies they need to get it done. There is no evidence that calls for more tests are some sort of anti-Trump plot; nonpartisan public health experts have said it’s critical for the government to significantly increase the level of testing as part of any plan to end social distancing and lift economic restrictions.

Even as Trump shifts his rhetoric to reopening the country, governors from both parties say they need more testing or that they’re still struggling to obtain the testing materials they need. This includes Republican governors from Ohio, Nebraska, Maryland, Massachusetts, South Dakota and Wyoming.
During the same briefing on Wednesday, Surgeon General Jerome Adams, a Trump appointee who has been a strong defender of the President during the pandemic, acknowledged that “many different groups” have talked to the administration about testing, “and we hear that testing is absolutely a concern.”
It’s not clear who Trump is referring to when he says some “not everybody believes as strongly as some people” in testing. While skeptics certainly exist, there is a strong consensus among public health and elected officials that testing is pivotal. These views are shared by major business executives, doctors, and even some Trump appointees, including Dr. Scott Gottlieb, his former chief of the Food and Drug Administration.

During Wednesday’s press briefing, Trump repeated a false claim he’s made numerous times about the travel restrictions imposed on China due to the coronavirus.

He once again described the restrictions as a “ban” and claimed that “if we didn’t close our country to China, we would have been so infected like nobody’s ever seen.”

Facts First: Trump’s comments are misleading because he did not “close our country to China.” On February 2, the United States began implementing travel restrictions that denied entry to foreign nationals who had visited China within 14 days of arrival in the United States. But the travel restrictions contain exemptions for US citizens who had visited China, which makes Trump’s characterization that there was a “ban” misleading.
As of February 2, US citizens who had been in China’s Hubei province in the two weeks prior to their return to the United States are subject to a mandatory quarantine of up to 14 days upon their return to the US. American citizens returning from the rest of mainland China may also face up to 14 days of quarantine after undergoing health screenings at selected ports of entry.
Only foreign nationals who have visited China within the past 14 days are temporarily banned from entering the United States.

Despite publicly disagreeing with Georgia Gov. Brian Kemp’s decision to open up businesses such as barbershops and tattoo parlors, Trump reiterated his past support for the governor. He compared his efforts to get Kemp elected with those of Democrats, erroneously claiming that Michelle Obama joined her husband in campaigning for Kemp’s opponent.

“As you know, Brian Kemp, governor of Georgia, I worked very hard for his election, he beat their superstar, he beat the superstar of their party. I think you can say I helped a lot,” Trump said, “Michelle Obama, Barack Obama, Oprah Winfrey they all went in, they campaigned for him very, very hard and he lost.”

Facts First: Michelle Obama did not campaign for either of Kemp’s opponents. Kemp beat Republican Lt. Gov. Casey Cagle, a man, in the primary and Democratic candidate Stacey Abrams, a woman, in the general election.

While Trump’s comments make it unclear which of Kemp’s opponents he’s referring to specifically, he has claimed on multiple occasions that both the Obamas and Winfrey campaigned for Abrams. While Barack Obama and Winfrey did, Michelle Obama did not.

Trump again exaggerated about Pelosi’s visit to San Francisco’s Chinatown on February 24, this time claiming Pelosi was having a “rally in San Francisco, in Chinatown.”

Trump’s description of the Chinatown visit has changed repeatedly. At previous briefings, Trump claimed Pelosi was “holding a street fair” in Chinatown — and that, during her visit, she called for a “Chinatown parade,” “parties in Chinatown,” and a “march” against his travel restrictions on China.
Facts First: Pelosi did not hold a rally or a street fair, and she did not call for a parade, parties or a march. Rather, amid concerns about rising anti-Chinese bigotry, she walked around Chinatown, visited businesses and a temple, ate at a dim sum restaurant and spoke to reporters to urge people to “come to Chinatown.”
Pelosi said that “we think it’s very safe to be in Chinatown and hope that others will come. It’s lovely here. The food is delicious, the shops are prospering, the parade was great. Walking tours continue. Please come and visit and enjoy Chinatown.”
Trump could mock Pelosi for not taking the threat of the virus seriously enough at that point. However, Trump himself tweeted the same day that “the Coronavirus is very much under control in the USA”, likened the virus to the “regular flu” two days later, and continued to downplay the situation well into March.

Dad’s Relatable Comics Sum Up Parenting During A Pandemic

Dad's Relatable Comics Sum Up Parenting During A Pandemic