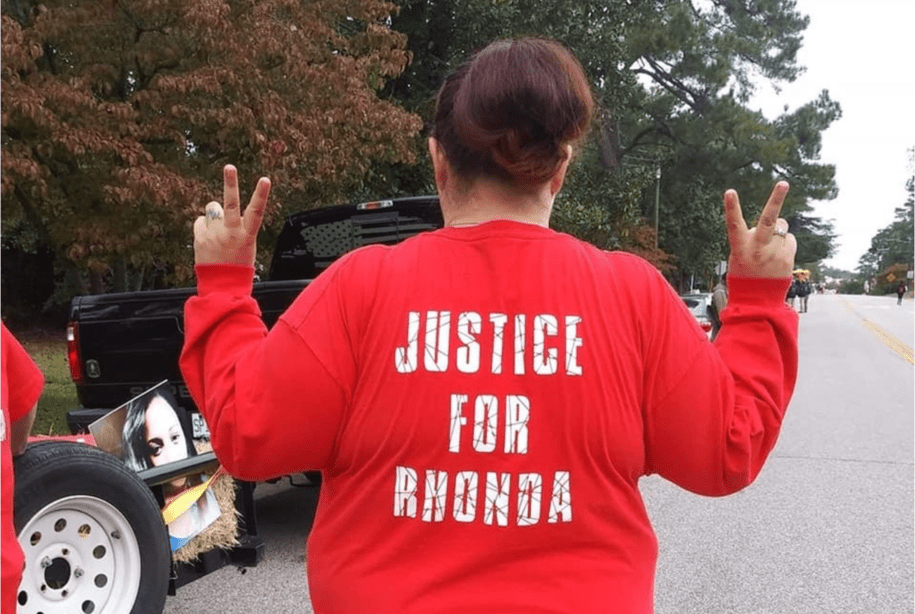 “You want to know what happened to my Rhonda? She was found buck naked, face down, stuffed in a trash can,” Price said. “She hated being dirty, and I think someone made an example out of her.”

Price offered a binder with tabs that list more than 30 missing and murdered people in the heart of North Carolina’s Indian Country. “Well, get ready. This is bigger than Rhonda.”

The national epidemic of Missing and Murdered Indian Women and Girls (MMIWG) had crept quietly through Robeson County until April 18, 2018, when the discovery of the naked bodies of 32-year-old Christina “Kristin” Bennett and 36-year-old Jones was met with public outrage. Lumberton Police initially reported the deaths, within a month and a three-block radius of each other, as unrelated. They were later combined as part of an FBI/SBI investigation and a joint reward for information.

Jones’ friend Megan Oxendine was interviewed about her death at the time. Three weeks later, Oxendine’s naked body was found dumped in a nearby area. Autopsy reports revealed minor cuts and abrasions on each victim; police say they have not yet been able to determine how they were killed and, to date, have declined to code the cases as homicides.

As Lumberton Police Lt. Vernon Johnson put it, “I cannot comment on an active investigation, but there was not enough physical evidence to determine the cause of death.”

Sheila Price says she was pressured by law enforcement to focus on her daughter’s alleged involvement with drugs. Days after the first two bodies were discovered, Lumberton Police Chief Michael McNeill issued a statement to the news media: “The bodies, both in advanced states of decomposition, were discovered April 18 in an area targeted by police as a known hangout for prostitutes and drug users.” According to Price, this official shoulder shrug is a common practice among local law enforcement.

The treatment of these cases and other similar cases sparked a public cry for transparency, including the formation of Shatter the Silence, a movement founded by Price and other families of missing and murdered individuals in eastern North Carolina. The group developed a petition in 2018 to hold law enforcement and local governments accountable for investigations and providing greater access to information.

Price also worked with doctoral student Crystal “Red Bear” Cavalier Keck to start a regional database that now includes more than 200 names of mostly Black and brown missing people. “If these had been rich white girls, they would be out here looking for who done this,” Price says. “Instead, they just labeled my daughter a street walker.”

Jones’ friend and former employer Beverly Collins-Hall, founder of the nonprofit American Indian Mothers, Inc. in Robeson County, sees the rising star’s tragic story as part of a larger issue. Jones was one of the first to participate in AIMI’s transitional housing program after having her first child at age 14. Collins-Hall worked alongside Jones and others in recovery for more than 20 years, and Jones had returned to work with the program.

“Rhonda was brilliant and empathetic; she wanted to help others in her situation,” said Collins-Hall, adding that she had created a data tracking system for the recovery program still in use today.

In addition to ongoing battles with mental health and substance abuse in the region, Collins-Hall points to other major challenges for Lumbee women in Robeson County: racism, poverty, lack of adequate health care, and the cycle of the criminal justice system.

“This is what happens in our community—pregnant women go to the hospital for delivery and they get addicted to opioids,” Collins-Hall explains. “The government can’t fix this. They don’t know how to help our families.”

Price is part of a growing number of victims’ families who say they’re frustrated by a lack of public transparency and tired of first being ignored by the news media—and later, exploited through sensationalized reporting. Shatter the Silence, which now numbers more than 3,900 members, continues to raise awareness about Jones’ case and the overall crisis of kidnapping and murders in Robeson County.

For her part, Price shares her daughter’s story weekly in hopes that someone will come forward with information. Families exchange information about issues they say are all too common, such as the lack of transparency by law enforcement and the delayed processing of rape kits.

Four out of five Indigenous women encounter violence today, according to the Coalition to Stop Violence Against Native Women. Although the U.S. Department of Justice reports that Indigenous women face murder rates more than 10 times the national average, families of those missing or murdered insist that no justice is being sought for women, men, children, trans people, and those identifying as ‘Two-Spirit.’

On May 5, the MMIWG’s community will participate in a National Day of Awareness for more than 100 “recognized” unsolved murders in North Carolina, a state that is home to more than 120,000 Native Americans. Rhonda was a member of the Lumbee Tribe of North Carolina. It is the largest non-federally recognized Tribe east of the Mississippi River, and the ninth-largest in the U.S.

Price wants the world to know there is more to Jones’ story than what the media cares to share on the third anniversary of her unsolved death.

“She was so smart, she could have been anything she wanted,” Price recalls. The proud mother describes her daughter as a girl so mathematically inclined that her school had flown her to Oakland, California, at age 13 for a meeting of gifted students. Jones’ life challenges began at age 14. She left school, but earned her high school diploma at 18 years old.

“I said, ‘Rhonda, I will make a deal with you. If you will go back to high school, so will I,’” Price said with a smile. “She enrolled a couple weeks later. We both finished at the same time. She graduated top of the class, and I got second.”

Jones went on to attend UNC Pembroke with an affinity for forensic science. Collins-Hall said at one point, she was preparing the mother of five to take over as director of the American Indian Mothers Institute. “I decided to go to law school to help American Indian women, not for me, but for Rhonda,” she adds.

The FBI continues to offer a combined reward of up to $30,000 for information that helps investigators determine the circumstances that led to the deaths of Bennett, Jones, and Oxendine.

And every day, Price wakes up to the call of Shatter the Silence in Robeson County, because she says it’s what her daughter would want her to do. “I keep thinking if we could solve these girls’ murders, then it will end,” Price said. “But honey, people call me when their kids go missing or there is a murder, and it starts all over again.”

Antionette Kerr is a North Carolina-based media correspondent, trainer and book publisher, and a recipient of the Press On Freedom Ways Reporting Fellowship.

Prism is a nonprofit affiliate of Daily Kos. Our mission is to make visible the people, places and issues currently underrepresented in our democracy. By amplifying the voices and leadership of people closest to the problems, Prism tells the stories no one else is telling. Follow us on Twitter, Instagram, and Facebook.

Brian Stelter: Leaders are failing to tell the hard truth

Brian Stelter: Leaders are failing to tell the hard truth