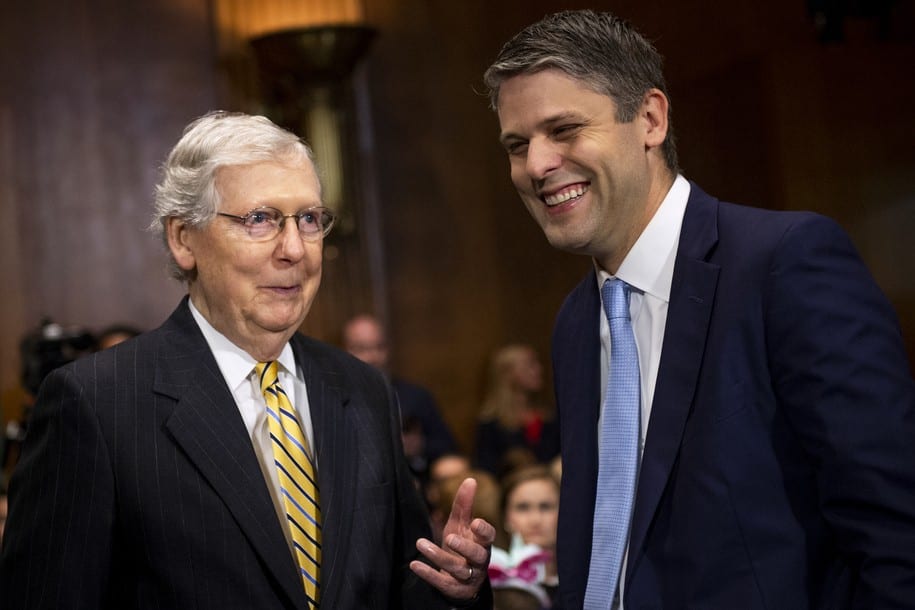 “The hearing on Walker’s nomination should not go forward until we know the truth about what ethical lines Mitch McConnell crossed to get Walker this seat,” Fallon continued. “At the very least, McConnell should come clean about whether and when he contacted Judge Thomas Griffith prior to his sudden retirement.”

McConnell’s court packing efforts have made news before, including his campaign of leaning on Republican federal judges to get them to retire so he can install very young and extreme partisans in their seats. McConnell and Trump have already filled more than one-quarter of the appeals court seats, but McConnell won’t rest until he’s got the maximum possible, even if that means prying out Reagan, Bush I, and Bush II-appointed judges.

Griffith is a former Senate legal counsel nominated to the appeals court in 2004 by President George W. Bush. Neither he nor McConnell will say whether he is among the judges subject to the pressure campaign led by McConnell. The D.C. Court of Appeals is the second highest court in the nation. It’s the key court for deciding cases relating to the constitutionality of federal rules and regulations and thus the reach of government. It provides a stepping stone both to Supreme Court seats and for some of the most important cases to reach the Supreme Court. Stacking it is as critical to McConnell’s extremist government coup as is stacking the Supreme Court.

“The coordinated manner of Majority Leader McConnell’s involvement in the judges’ decision-making is quite unprecedented and raises significant ethical questions for the judges who heed his advice,” Demand Justice said in its letter requesting an investigation. A “thorough inquiry into the judge’s announcement and scheduled retirement, including when and how the decision to retire was made, and with whose input, is crucial.” Judge Srinivasan apparently is concerned enough to request the inquiry.

“The organization’s request for an inquiry concerns the decision of a judge of this court to retire from service and the resulting creation of a vacancy on this court, which would be filled by a future colleague on this court,” Srinivasan wrote. He added that he made this ruling ruling without “any inquiry by this court into the statements contained in the unverified correspondence or the questions posited by the organization in the correspondence about the possibility of judicial misconduct.” The judge said he was making the ruling public since he wanted to make sure it was clear the concerns about McConnell’s actions were not being ignored, because the questions brought up by Demand Progress “about the possibility of judicial misconduct have been reported in various major news outlets.”

Walker’s hearing is scheduled for Wednesday. It seems unlikely that Moscow Mitch or Leningrad Lindsey Graham, who chairs the Judiciary Committee, will decide to postpone the hearing out of concern about appearances of extreme partisanship. Because it’s McConnell and Graham we’re talking about. Once again, the ball in is Chief Justice John Roberts’ court.

States reopening: We won’t know the impact for weeks. Here are several reasons why

States reopening: We won't know the impact for weeks. Here are several reasons why