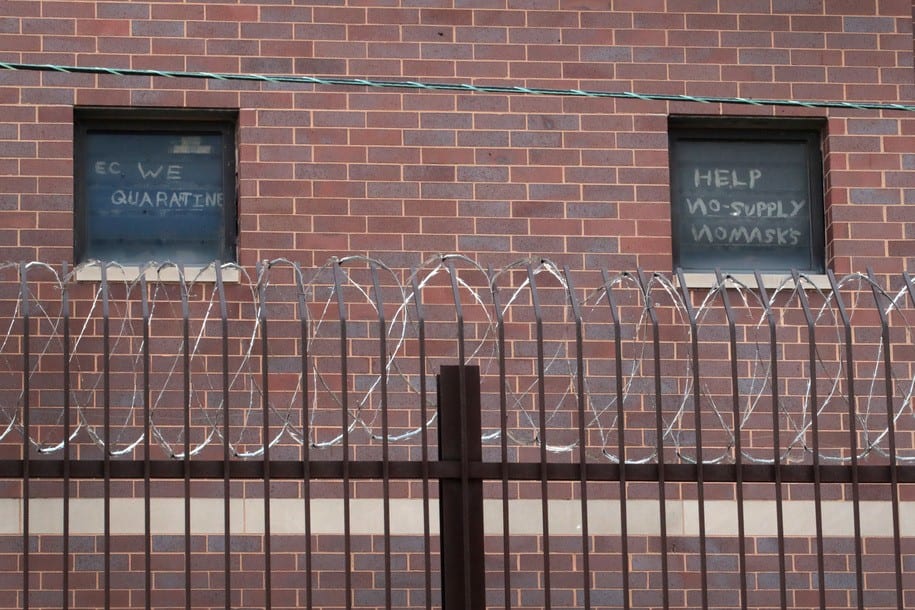 The lack of adequate resources to combat the virus is creating an unimaginable strain. In response, county officials are not just ramping up efforts within Phoebe Putney Memorial Hospital, one of the towns few medical centers, but also looking four miles away to the Dougherty County Jail and hoping that rapid decarceration will save lives.

The Martin Luther King Jr. Memorial Chapel, which hosted Mitchell’s funeral service, the hospital which serves as the county’s main lifeline, and the local jail which could undermine any progress made against COVID-19, all sit within a 15-minute drive of one another and act as physical stand ins for loss, life, and social death. Together, they tell a story that is specific to Dougherty County but which also illuminates the dire straits of rural counties nationwide. Here, rural communities that are typically left out of conversations about mass incarceration and Black communities who are typically underreported in stories about rural life come into full view.

In Dougherty County’s 2019 municipal budget, over $16 million was allocated to public safety, over $15 million of which went exclusively to the city’s jail. In contrast, only $5 million in expenditures were spent on public health and social services. According to “Protecting Rural Jails from Coronavirus,” a recent report from The Justice Collaborative and Data for Progress, this is a trend in rural communities across the country where years of overinvestment in the carceral system coupled with underinvestment in health infrastructure have made the pandemic a particularly strong threat to county jails.

According to the Vera Institute of Justice, from 1970 to 2013, rural jail populations grew by 400%. The report notes that rural jails boast per capita incarceration rates that are over twice as high as those in urban areas like New York City or Los Angeles. In 2019, while urban communities held 165 people in jail for every 100,000 residents, rural areas held 398. Still, the relatively small size of rural facilities equates to fewer resources, particularly crucial medical resources. While jails in larger, urban areas have full-time medical providers, smaller rural jails often only have part-time nursing staff.

For rural jails with inadequate healthcare infrastructure, their problems mirror the lack of resources available within the communities where they are situated. The report notes that more than half of all counties—most in rural areas—don’t have any ICU beds at all. While over 80% of urban hospitals have an ICU, only about one-third in small rural areas do. Further, the report notes many counties are without a hospital altogether, since over the past decade hospital closures have become commonplace in many rural communities. In rural Georgia, for example, seven hospitals have closed over the past decade alone.

This lack of countywide healthcare capacity trickles down to the incarcerated population who often must rely on external services. Dougherty County Jail administrator John Ostrander says that their facility has a contract with the local hospital to run an outpatient clinic. Since the pandemic however, they have been using a separate unit to quarantine those suspected of having COVID-19 so as to not bring the virus into the facility’s medical spaces. While meager, this is more than many other rural facilities can claim. Currently, 12% of people incarcerated in U.S. jails are detained in facilities located in counties without a single ICU bed. About 5% of them are detained in facilities in counties without any hospital at all.

As advocates have been calling for the mass release of people in prisons and jails across the country, the authors of the Justice Collaborative report argue that in the context of rural jails, decarceration is particularly important. Like Dougherty County Jail, many jails in rural spaces are overwhelmingly composed of pretrial detainees, even more than the national average of 60% of the jail population. The prevalence of pretrial detainees means that mass releases would pose little to no public safety risk as the majority of detainees are only being held because of their inability to post bail.

Further, rural areas are often “legal deserts” that lack a community of readily available lawyers. Attorneys and judges in these areas often must be brought in from nearby towns to avoid conflicts of interest that can typically arise in communities with such small populations. The process of simply securing access to legal counsel can make court proceedings take an extremely long time, often so long that defendants decide to just take a plea deal. This lack of resources within rural communities creates an environment that extends the amount of time people stay in jail and, in this moment, increases their risk of contracting COVID-19.

Recognizing the role that jails can play in spreading the disease within facilities and into the surrounding community, Dougherty County public safety officials have begun to rapidly lower their jail population by using strategies that are in part modeled after the county’s existing pretrial release program. Recent efforts to reduce the county jail population have included raising the amount of earned time credits offered to the maximum allowed in Georgia, which is four days of credit per every day worked by an incarcerated person, scanning every case to identify incarcerated people who would be eligible, and then releasing them. The county jail has also been coordinating with other departments such as the county judiciary who are granting low or no bonds to those who were in custody on misdemeanor cases. Jail administrators are also working with the Department of Community Supervision to release those in jail for technical violations of their probation. Since ramping up these efforts in March, the jail has reduced its population by 30%.

Dougherty County’s efforts are emblematic of the recommendations made by the authors of the Justice Collaborative report for how local officials can use their power to mitigate the spread of COVID-19 in rural jails. In addition to working with judges to lower bond amounts and granting early release to those detained pretrial or on violation of their probation or parole, the report also recommends halting new jail admissions by using cite-and-release and utilizing text alerts to remind people of their upcoming court dates.

Since the onset of the pandemic, calls to recognize the links between the health of the public and mass incarceration have largely been amplified when they focus on larger urban areas like New York City or Chicago. While this is understandable given the sheer size of their populations, rural communities–particularly under resourced communities of color—warrant inclusion in those conversations as well. Rural communities must consider whether they are  willing to abandon their decades-long commitment to expanding incarceration after the pandemic ends—even in the face of opposition.

“We’re hopeful that some of these strategies, because we found them to be so efficient, may continue to become relevant practice after the courts have resumed normal operation, but that has yet to be seen,” said Ostrander. “There is some pushback from the local police agencies that…naturally their officers have some feelings about bringing an individual to jail for us to just turn around and release them again, which is happening with rapidity when [people are] brought to jail on a misdemeanor charge. But I’m not sure that incarcerating misdemeanors is the most efficient way to utilize taxpayer funds. So it very well may survive after COVID-19 is behind us.”

Tamar Sarai Davis is Prism’s criminal justice staff reporter. Follow her on Twitter @TheRealTamar.
Prism is a nonprofit affiliate of Daily Kos. Our mission is to make visible the people, places, and issues currently underrepresented in our democracy. By amplifying the voices and leadership of people closest to the problems, Prism tells the stories no one else is telling. Follow us on Twitter, Instagram, and Facebook.