He signed up for a trial of a vaccine that’s never been used in humans. Here’s why. 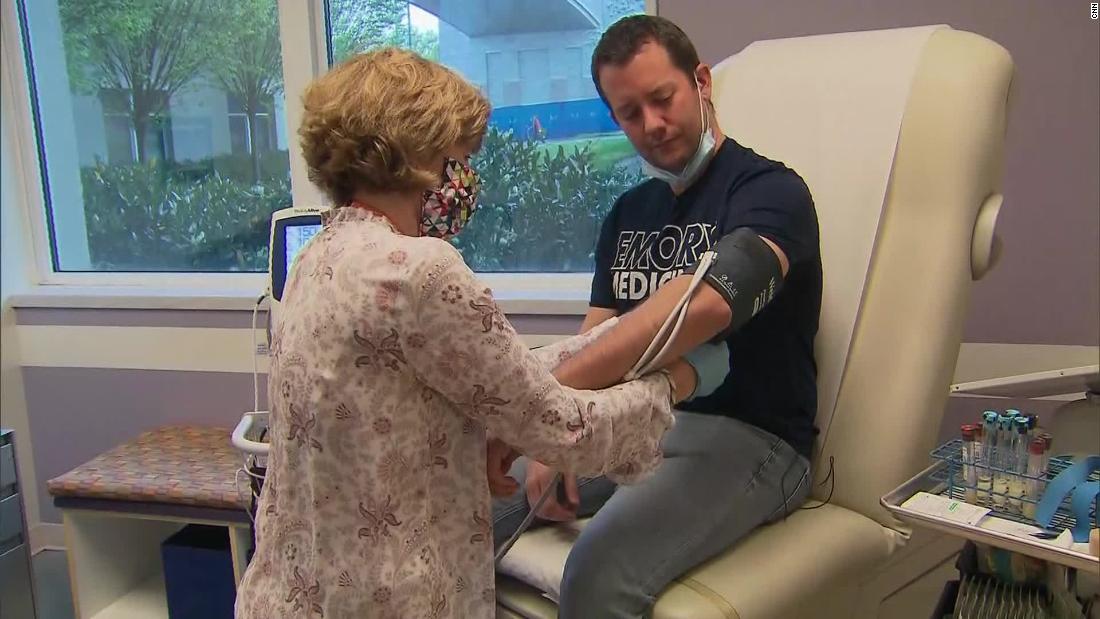 In fact, it’s those very questions that he is helping us answer.

Sean is helping all of us figure out if it is safe, by putting up his hand first and volunteering. With that injection, Sean had become a critical part of the fastest moving vaccine trials in the history of the world, a vaccine for Covid-19.

During a pandemic, the urgency is understandable. In just a few months, the virus has spread to nearly every corner of the globe and sadly taken more lives than several wars or natural disasters combined. It is also true that no one on the planet is immune to this; such is the nature of a novel or new coronavirus. As you process all that, remember that last Thanksgiving, this wasn’t even a real concern for human beings, and not even a topic of idle conversation. And, now it is the only thing being discussed in hospitals, boardrooms and at kitchen tables every night, often by Zoom. So, yes. The urgent pace is quite understandable but we have to make sure we can sprint, while also not tripping, falling and getting hurt.

When I sat outside with Sean recently at Emory School of Medicine in Atlanta, where he is studying and I am on the neurosurgery faculty, it may have appeared to be just another meeting between student and teacher. If you looked a little closer, however, you would’ve noticed that we were sitting several feet apart, masks tucked around our necks, raising our voices a bit to make sure we could be heard. I really wanted to understand how Sean had decided to volunteer for an experimental vaccine. I wanted to understand how he processed and assessed risk. As a dad, I wanted to know what his parents thought.

It was no surprise to me that, despite the fact he hadn’t been born yet, Sean was familiar with the story of the swine flu vaccine of 1976. In January of that year, a new or novel virus began spreading at Fort Dix in New Jersey. Fearful that this new virus might cause a pandemic like the one in 1918, the United States rushed a vaccine through development. Within a year, nearly 25% of Americans had been vaccinated, around 45 million people. Without enough time to perform adequate safety trials, however, devastating side effects started to emerge. Hundreds of people developed Guillain-Barre syndrome, a paralysis that starts in the feet and slowly marches up your body. Several people also died, and for some, a fear of vaccination remains to this day.

“That was definitely a concern,” Sean told me, “potentially developing things like Guillain-Barre. It is a risk.

“With this particular vaccine, no one knows what the chances of that are. But those potential risks are outweighed, I think, by the potential benefits of this vaccine, because right now there are no great preventative measures for containing this virus.”

A bold timetable for a challenging disease

Dr. Amesh Adalja, a senior scholar focused on emerging infectious disease at the Center for Health Security at Johns Hopkins University, notes the timeline for this vaccine is quick compared to others. U.S. health officials have said a vaccine could be ready in 12 to 18 months — lighting speed in the world of vaccine development.

“Vaccine development is usually measured in years and sometimes even decades,” Adalja said. “And there are some infectious diseases for which we have no vaccine after decades and decades of work, like HIV or hepatitis C, for example.”

“The only way that we’re going to really contain this virus is with the vaccine,” Adalja said.

Dr. Peter Hotez, a leading expert on infectious disease and vaccine development at Baylor College of Medicine, believes the 12-to-18-month timeline may be wishful thinking.

“I can’t think of another example where things have gone that quickly,” Hotez said. The quickest vaccine ever developed was against mumps. After vaccine inventor Maurice Hilleman isolated the mumps virus from his 5-year-old daughter in 1963, it sped to market in four years.

Doing that in a fraction of the time would be a challenge, Hotez believes.

“We’re certainly trying, I mean, our scientists are working day and night in the lab now,” he said.

When side effects mean giant setbacks

Safety is always paramount, but especially with vaccines. Unlike therapeutics, which are often first trialed in people with the late stage of a disease, vaccines are given to healthy people to prevent the disease. The risk of causing illness or even death in an otherwise healthy person haunts everyone involved in the coronavirus response.

“Many people are asking, ‘Well why do we have to test the vaccines? Why don’t we just make the vaccines and give them to people?’ Well the world has learned many lessons in the mass use of vaccines and there’s only one thing more dangerous than a bad virus, and that’s a bad vaccine,” Ryan said. “We have to be very, very, very careful in developing any product that we’re going to inject into potentially most of the world population. We have to be very, very, very careful that we first do no harm. So that’s why people are being careful.”

The 1976 swine flu vaccine debacle is one of the best-known instances, but there have been more recent failures. In 2017, a campaign to vaccinate nearly 1 million children for mosquito-borne dengue virus in the Philippines had to be stopped because the vaccine actually raised the risk of severe dengue infection in some people. Ten children died.

In the rush to protect kids against an infection that makes 400 million people sick and kills 22,000 every year globally, officials ignored warnings that the vaccine should only be used in people who have already been infected once. Dengue is actually caused by four different viruses and the first infection is usually mild, while the later infections are more dangerous. In this situation, vaccinating people who had never been infected sometimes raised their risk of complications if they were then infected with a different strain.

The earliest vaccines, such as the smallpox vaccine used for hundreds of years, involved inoculating people with a real, live, virus in the hope that a controlled dose and infection would provide immunity. It was a gamble, and many people became very ill or died from such attempts.

Later vaccines used related but less harmful viruses. In the 20th century, scientists learned how to kill or weaken viruses and bacteria in the lab and use those to vaccinate.

“The question is, will a year to 18 months be adequate time to monitor for safety?” he asked.

Can we hijack genetic material to get a vaccine faster?

Because coronavirus is such an overwhelming threat, this careful and ponderous timeline is being compacted enormously. Vaccines started human testing just months into the pandemic, and some tests are being run simultaneously on humans and animals. Remember, vaccines work on a simple principle: priming the body’s immune system to recognize, attack and neutralize a bacterial or viral infection.

Vaccine makers got a head start on a Covid-19 vaccine because work had already started on vaccines against two related coronaviruses: severe acute respiratory syndrome or SARS, which infected about 8,000 people and killed close to 800 before it was stopped in 2004, and Middle East respiratory syndrome virus or MERS, which causes occasional outbreaks.

So scientists already knew a great deal about the mechanism by which this particular virus used its spike protein to enter human cells and how to inhibit that process.

One new approach relies on using genetic material that looks like bits of a microbe and that stimulates the body to produce an immune response. There’s no chance of accidental infection, because no virus is actually used. For coronavirus, one hope is that using messenger RNA — the genetic material that directs cells to produce something — will offer the quickest and safest path.

In this case, the RNA vaccine would stimulate cells to make those spike proteins that look like pieces of coronavirus. If it works properly, upon being exposed to those engineered fragments of the virus, the body would be taught to recognize them, and be prepared to defend against them if there was a future attack or infection.

RNA vaccines are quick and relatively easy to make, which is why they are already being tested in people. All a lab needs is the genetic sequence of the virus. But no such vaccine has ever been approved for use in the population.

Another, more time-tested approach to fighting coronavirus employs viral vector vaccines. These use viruses harmless to people, genetically engineered to carry bits of the target virus — in this case, the Covid-19 virus. The harmless virus causes a symptom-free infection, and the immune system learns to recognize the harmful genes.

But while the technology means quick progress, Adalja said they are also still new.

They can fail, or produce unexpected side effects.

When it comes to RNA vaccines, “there is no precedent yet for them being approved for use and, and we don’t know everything about them in terms of how they’re going to behave in large numbers of people and what the side effect profile they might be,” Adalja said.

It’s something that Sean Doyle has considered not only now, but once before as well. Back in 2017, he raised his hand to be among the first to be injected with the Ebola vaccine. He was a first-year medical student at the time, and watched as the first patient in the United States was treated at his medical school, Emory. Sean remembers exactly what led him to participate.

“I remember the fear that was surrounding both the outbreak in West Africa,” he said. “The fear for the folks there and their health, but also fear about whether or not the virus could get out from West Africa and spread to other places around the world.”

And while the outbreak was contained before the vaccine trial began, he knew taking part of the trial meant if it ever happened again, there could be a vaccine that would hopefully be deployed quickly.

Then, like now, Sean knows it’s volunteers like him who put themselves at risk for the greater good — whatever that entails.

“There were conversations that I had with friends and family,” he said. “They all expressed concerns about getting an experimental vaccine like this where no one knows what the side effects might be. But they trusted my judgment.”

Tags: He signed up for a trial of a vaccine that's never been used in humans. Here's why. - CNNhealth
Previous Post

Poll: A Pandemic Hasn’t Done Much To Change Americans’ Views On Immigration

Poll: A Pandemic Hasn't Done Much To Change Americans' Views On Immigration