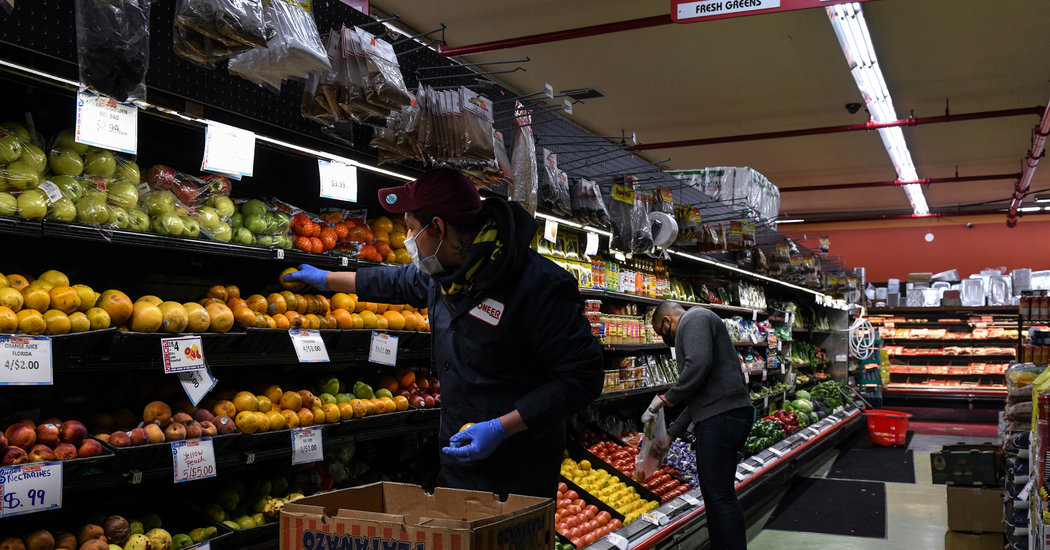 LOS ANGELES — Héctor Sánchez Barba had been counting on Latinos to show up in record numbers in November’s election.

He dispatched organizers to Arizona, Florida and Texas. He courted voters at churches, parks and parties. He prodded Democratic candidates to pay attention to Latino voters. More than in any other election in his decades of organizing, there was one ultimate objective: defeating President Trump, who introduced his 2016 campaign by attacking Mexican immigrants as criminals.

“This was the first time that there was a strong appetite to be more aggressive,” said Mr. Sánchez, the executive director of Mi Familia Vota, a national Latino voting group based in Phoenix. “There was one goal: to unite people.”

Then came the coronavirus outbreak, and a kind of vulnerability nobody could have predicted.

The pandemic is likely to hit the country’s 60 million Latinos particularly hard, both in terms of health and economics. Few can work from home — one study from a left-leaning research group found that just 16 percent could do so. They disproportionately work in the retail and service industries, putting them in increased danger of losing their jobs or becoming infected while continuing to work in grocery stores, restaurants and construction sites. They are also less likely to have health insurance, making it even more difficult to find medical care.

“We are always the most vulnerable,” Mr. Sánchez said. “Latinos already have the highest levels of death and injuries at work, because we are overrepresented in jobs with the worst working conditions.”

Now, organizations like Mi Familia Vota are struggling to serve dual purposes: informing and protecting the most vulnerable, while at the same time keeping Latinos politically engaged. But how do you organize when it is impossible to knock on doors or engage in the face-to-face conversations that many believe are needed to get those voters to turn out this fall?

Many political organizers have long lived by the adage that it takes more than a dozen “touches” to persuade Latinos to vote for the first time — a way of indicating they need to be convinced multiple times. In an election where Latinos are projected to be the largest ethnic minority voting bloc, what happens when those touches all become virtual?

One possible answer comes from alumni of Senator Bernie Sanders’s campaign, which focused heavily on Latinos throughout the Democratic presidential primary race, a strategy that paid off in Nevada and California.

The architect of that outreach, Chuck Rocha, plans to start a $22 million political action committee to target Latinos directly through paid advertisements on television and online, urging them to vote for former Vice President Joseph R. Biden Jr., now the presumptive Democratic nominee. The group will focus on battleground states including Michigan, Wisconsin and Pennsylvania, with the kind of organizing it used during the primary campaign, relying on volunteers to use an app to reach other potential voters by phone.

“The average Latino in Nevada heard from our campaign 22 times, and we showed that works,” Mr. Rocha said. “We’re experiencing something we’ve never experienced before, and we want to build something that has never been built before.”

The pandemic, and its lasting health and economic effects, will pose challenges, however. Though the demographics of infection rates have been uneven, early indicators suggest that Latinos are seeing a disproportionate spike. In Boston, doctors at Massachusetts General Hospital reported last week that nearly 40 percent of coronavirus patients were Latino, though they typically make up less than 10 percent of patients in the hospital. And in New York City, Latinos are dying from the coronavirus at twice the rate of white people, according to preliminary data released by city officials.

“This climate is enormously complex and these are families with tremendous needs,” said Eric Rodriguez, who oversees policy and advocacy for UnidosUS, a nonprofit that has spent months organizing voters across the country. “We are going to have an election in a moment when we are really focused on leadership and I think what we are starting to see for sure is more outrage at the way political leaders are acting. The more that outrage intensifies, the more work there is for us to do telling people how to use that politically.”

Several Latino activists say they are disseminating information about health and safety for now, but are preparing to pivot to make the case that the Trump administration’s handling of the crisis has further endangered their communities.

“We have to brace ourselves for the fact that there is going to be devastation in black and brown communities — and we need to connect that to the ballot box,” said Maria Teresa Kumar, the chief executive of the nonprofit group Voto Latino. “There is no better moment to do that.”

Many Latino activists are also pressing for Congress to include benefits for undocumented immigrants in a fourth recovery package, a position that has also been pressed by Mr. Sanders, who dropped out of the presidential race last week. So far, the benefits have excluded any households that pay taxes using an Individual Taxpayer Identification Number, as undocumented workers do — leaving an estimated 12 million people ineligible.

After spending much of the past year organizing and registering voters for the Democratic primary race, the League of United Latin American Citizens has turned its focus to helping Latino laborers receive protective gear if they are still working, and unemployment if they are not.

As many as three million undocumented immigrants are working in agriculture jobs that are deemed essential amid the pandemic. In Iowa, league officials have begun to press employers in the meatpacking industry to provide safer conditions for workers, hundreds of whom are working in cramped spaces without protective gear.

“You still have workers there, people in the fields, construction workers, all with no masks, no kind of real protection — they are working at a tremendous risk,” said Domingo Garcia, the president of the league, which is the oldest Latino civil rights group in the country. “We expect these could become death traps. All this is emphasizing this tremendous inequality we have grown used to.”

Cristina Jiménez, the executive director of United We Dream, an immigration advocacy group that also focuses on Latino voters, said the crisis had exposed the lack of a safety net.

“The folks who are working essential jobs right now are the same people who don’t have health care,” she said. “The people who are cooking the food we are eating don’t have enough to eat themselves. This is why you saw overwhelming support in the Latino community for Senator Sanders — we need sick days, we need insurance.”

Ms. Jimenez pointed to early evidence that low-income and immigrant neighborhoods in New York City have been ravaged by the virus as another sign that Latinos are more likely to fall ill.

“The fact is that the only way for us to survive this crisis is for us to unite behind a progressive vision for the country,” she said. “This is a moment for us to make people realize why it is so important who is in the White House. That Latinos and Latinas who are working-class people are really being killed by the president’s actions.”

The pandemic has forced many Latino organizers to move their focus to digital efforts that some have pushed for years. Voto Latino, for example, plans to register more than 500,000 voters online. In recent weeks, the organization has started to work with local groups that would typically be registering voters in person.

“My concern is traditional voter registration is not happening, and we know that there is going to be a gap come September,” Ms. Kumar said. But, she added, “people are holed up in their homes, they are on their screens, and that’s where we have to be.”

Mr. Rodriguez said he expected a political backlash when Latino voters start to realize how many in their communities have been left out of the recovery payments.

“Everybody is going to get a little something except the most vulnerable,” he said. “The disparities that exist are going to be significantly widened.”

The pandemic will force political campaigns to rethink the way they engage with Latino voters, said Stephanie Valencia, a founder of Equis, a research group, which has found that such voters, who tend to be younger, receive most of their information online.

“This really shows the fragility of our systems and the ways in which the Latino community has been ignored,” Ms. Valencia said. “This is a disease that sees no status, but the impacts are not going to be even.”