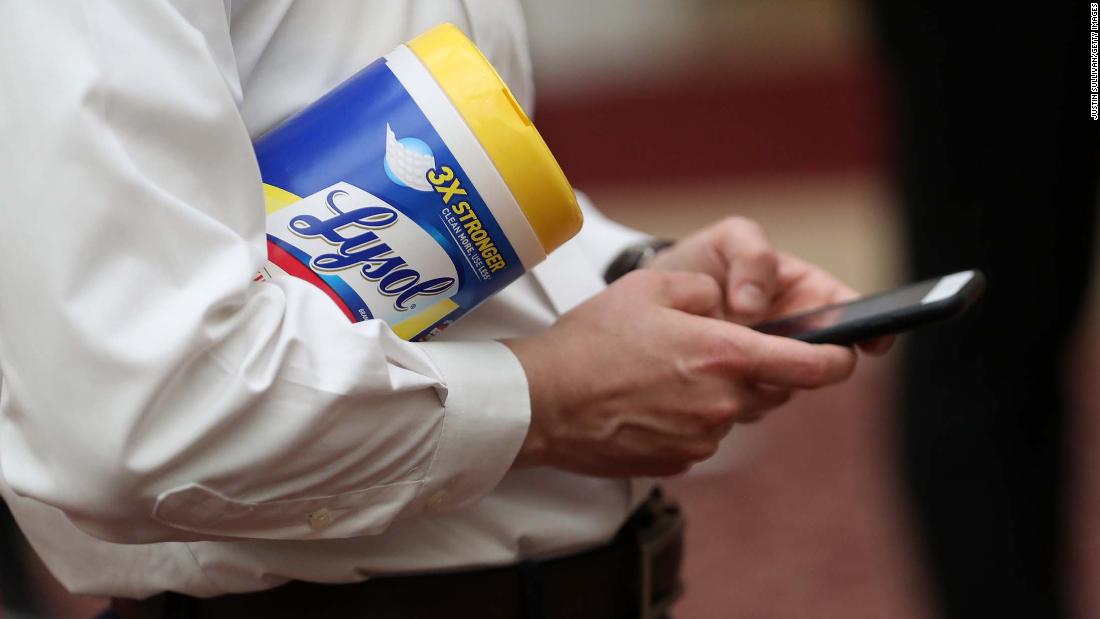 Reckitt Benckiser (RBGLY), a British company, warned Friday that human consumption of disinfectant products is dangerous. It issued the statement following “recent speculation and social media activity.”
“As a global leader in health and hygiene products, we must be clear that under no circumstance should our disinfectant products be administered into the human body (through injection, ingestion or any other route),” the company said in a statement.

RB said products should only be “used as intended and in line with usage guidelines.

“We have a responsibility in providing consumers with access to accurate, up-to-date information as advised by leading public health experts,” the company said.

The statement followed remarks from President Trump on Thursday on the use of disinfectants.

“And then I see the disinfectant where it knocks it out in one minute. Is there a way we can do something like that by injection inside or almost a cleaning … it would be interesting to check that,” Trump said. “It sounds interesting to me,” he added.

CNN’s Chief Medical Correspondent, Dr. Sanjay Gupta was quick to point out that this is simply wrong.

“He also said it needs to be studied. Actually, it doesn’t. I mean we know the answer to this one,” he said on CNN’s Anderson Cooper 360 on Thursday. “I think everybody would know that that would be dangerous and counter-productive.”

Ingesting or injecting disinfectants is dangerous, according to a medical expert employed by the Trump administration. Food and Drug Administration chief Dr. Stephen Hahn told CNN’s Anderson Cooper, “I certainly wouldn’t recommend the internal ingestion of a disinfectant.”

The US Food and Drug Administration regularly warns the public against drinking bleach, or even inhaling fumes from bleach. It’s also irritating to skin.

On Monday, the US Centers for Disease Control and Prevention said calls about poisonings with cleaners and disinfectants had increased more than 20% in the first three months of 2020 — as coronavirus cleaning increased — than from the same period a year earlier. Among cleaners, bleaches accounted for the largest percentage increase in calls from 2019 to 2020.

The CDC recommends using soap and water or bleach to kill the virus. Rubbing alcohol that’s at least 70% alcohol will also kill it on surfaces; 60% for your hands.

— CNN’s Maggie Fox and Rich Phillips contributed to this report