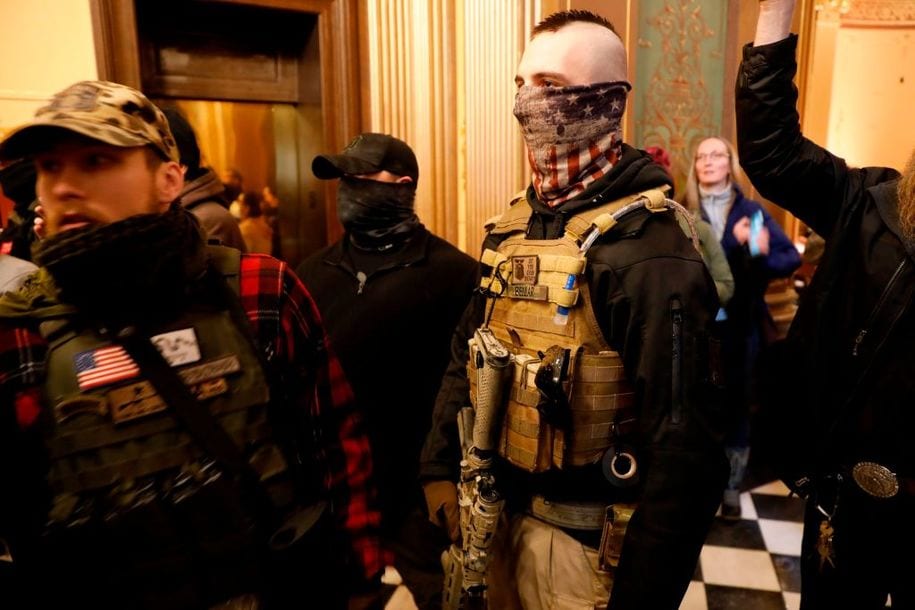 Jammed into the rotunda, the protesters attempted to march onto the House floor, but were prevented from doing so by the sergeant-at-arms and state police. Some chanted “Let us in!” and “This is the people’s house, you cannot lock us out.”

In addition to the weapons and body armor, a number of the participants wore Hawaiian shirts, indicating they were participating in what they believe is a coming civil war, or “Boogaloo.”

Some legislators felt so threatened that they wore body armor to the session. “Some of my colleagues who own bullet proof vests are wearing them. I have never appreciated our Sergeants-at-Arms more than today,” tweeted Sen. Dayna Polehanki.

One of the many signs held by protesters threatening violence read: “Tyrants get the rope.”

In the meantime, Donald Trump urged Whitmer to talk to the protesters: “The Governor of Michigan should give a little, and put out the fire,” Trump tweeted on Thursday. “These are very good people, but they are angry.”

He added: “They want their lives back again, safely! See them, talk to them.”

“At the point of a gun? Hell no,” replied Democratic strategist Jim Manley.

Michigan has been hit particularly hard by the novel coronavirus pandemic. As of Thursday, the state of Michigan had 41,379 cases of the coronavirus with 3,789 deaths.

Thursday’s “American Patriot Rally” was organized by Michigan United for Liberty, and featured members of the Michigan Liberty Militia, listed as an extremist antigovernment group by the Southern Poverty Law Center. Among the speakers it invited to address the crowd on the steps of the Capitol was former Milwaukee County Sheriff David Clarke, a longtime “constitutionalist” closely affiliated with the “Patriot” movement who has been a leading critic of the lockdown orders since they were first issued.

Michigan has a long history in the “Patriot” movement dating back to its origins in the 1990s, and is one of its major epicenters. That history includes:

Much of the “Patriot” movement activity subsided in Michigan after Olson and Southwell moved to Alaska, but it remained dormant in the state until being revived as an extension of the so-called “Tea Party” movement after 2009. Led now by Clint Dare and Ron Gaydosh, the Michigan Militia Corps re-organized and elected Dare their new state commander. It slowly raised its in numbers again, and currently claims to have cells in around 17 counties as part of its organization.

Michigan’s Democratic state senate minority leader voiced his anger and concern. “This protest wasn’t about the stay-at-home order, it was an opportunity for a small group of folks—very few of whom were engaging in social distancing or wearing masks—to show off their swastika posters, confederate flags, nooses hanging from cars and signs calling for murder,” said Jim Ananich of Flint in a statement.

Remembering those who have died from Covid-19

Remembering those who have died from Covid-19