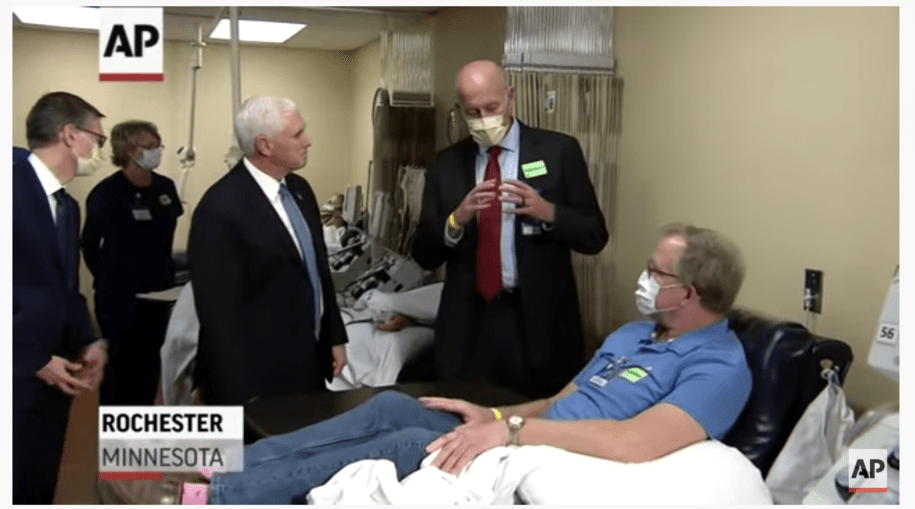 These are the facts:

The Mayo Clinic informed Mike Pence that anyone coming to visit their facility needed to wear a mask. Not only was that information previously acknowledge by the Mayo staff (in a now deleted tweet), Pence himself didn’t deny it when the White House was in Excuse Round #1.

Everyone with Pence at the clinic was wearing a mask. The video of him strolling around exhaling his milk breath into everyone’s face is immediately striking expressly because everyone else is clearly following the rules, and Pence is so clearly not following the rules.

Pence then engaged the claim that he didn’t need to wear a mask because he gets tested for COVID-19 all the time. That’s maybe not the best thing to say in a nation where most healthcare workers, nursing home workers, and people who are displaying symptoms still can’t get tested. It also offers absolutely no protection to people who could be infected by Pence between those regular tests.

In the third round of how to bungle a response, “Mother” Karen Pence was dispatched to Fox, where she denied everything up to that point and claimed that her husband was unaware that everyone in the clinic was required to wear a mask. Because the idea that Mike Pence is just intensely, intensely ignorant is always an acceptable position. Also, it’s apparently okay for Mother to blatantly lie on nationwide TV.

And now The Washington Post is ready with the next round in this thing that might be funny if it wasn’t putting people’s lives at risk. Pence’s office is threatening to sue a reporter for revealing the fact that Pence’s own office warned journalists accompanying Pence to the clinic that they would need to wear masks.

Not only did Pence’s office know that masks were required, they—not Mayo Clinic, but Pence’s team—told journalists they would have to wear masks to go along. Voice of America Reporter Steve Herman spilled the beans that all the journalists “were notified by the office of @VP the day before the trip that wearing of masks was required by the @MayoClinic and to prepare accordingly.” Clearly showing that latest claims offered up by Mother Pence are, shockingly, a big fat lie.

For making it clear that Karen Pence was simply out-and-out lying to America in the continued effort to cover up this event, an event that would be the silliest aspect of the entire crisis had not Donald Trump suggested drinking bleach, Trump’s staff is now claiming that Herman “violated the off-the-record terms” of the memo telling him to wear a mask for the trip. He has also been banned from Air Force Two and from coming along on future Pence trips.

Notice what’s not in these statements is any claim from Pence’s staff that Herman is lying. That’s exactly the problem—Herman told the truth. But his truth is getting in the way of their lies … and that clearly can’t be allowed.

Dogs trained to try to sniff out coronavirus

“I will never lie to you”

"I will never lie to you"