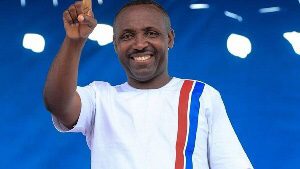 According to him, the New Patriotic Party is focused on building the party into one formidable political party that cannot be easily beaten in elections.

He noted that currently, the NPP is registering its members and securing its base ahead of the 2024 elections.

Prior to the registration, the NPP held its Constituency Delegates Conferences across the country; a move that solidifies the party and brings an end to several challenges at the constituency level.

However, not much is been heard about the National Democratic Congress (NDC) than attacks and name-calling over the 2020 elections the party lost.

“We are coming again and we will beat them in the next election. This is because what makes the people of Ghana vote for us, the NDC hasn’t studied to know it,” he said in an interview on Accra-based OKAY FM.

“While the NDC continues to make noise, the NPP is working on its base as a political party. The party has organized its constituency conferences and is currently registering members of the political party.

“In the month of October, the party will be organizing regional conferences to assess and deliberate issues on the state of the political party in all the regions and by December we will be organizing our National Annual Delegates Conference,” he added.

Mr Boadu is the last few weeks has been caught in some scandals with rumours flying around he has been sleeping with Ghone Tv show host Serwaa Amihere.

The rumours were so dirty that some issues of HIV were all captured as part of the rumour.