New Details Hint at Risk of Russian Misinformation in Dossier 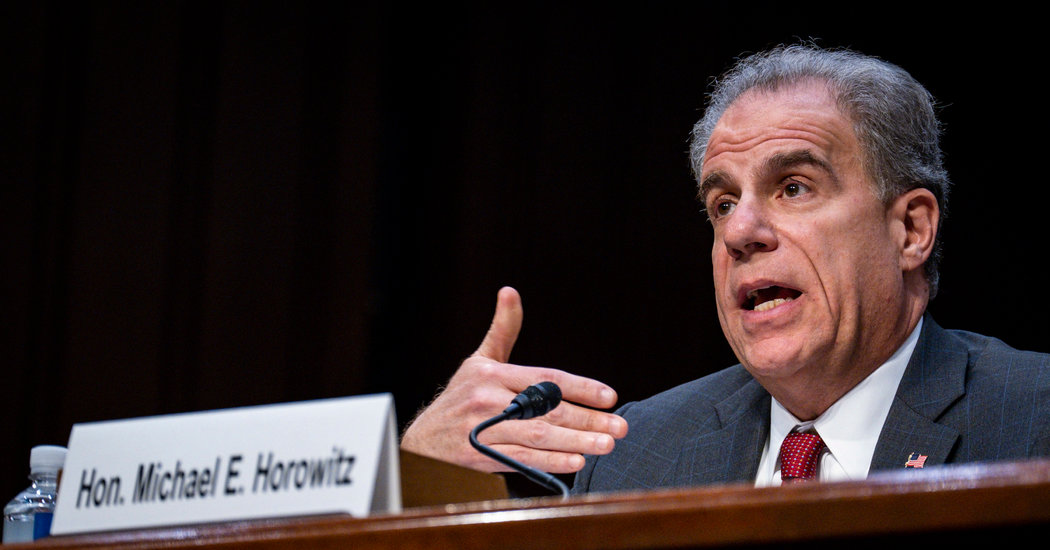 WASHINGTON — The Trump administration has declassified several footnotes from a report about the F.B.I.’s Trump-Russia investigation, providing details hinting anew at the possibility that Russia may have sown disinformation in a dossier used to investigate a former Trump campaign aide.

The newly disclosed information consists of previously blacked-out words in more than three dozen footnotes from a lengthy report on the investigation by the Justice Department’s independent inspector general, Michael E. Horowitz, that was made public in December. Several were disclosed Friday and the rest were sent to lawmakers on Tuesday.

Mr. Horowitz’s report found that the F.B.I. had an adequate legal basis to open the Russia investigation, internally called Crossfire Hurricane, but uncovered numerous errors and omissions with one piece of that inquiry: an application for a wiretap targeting Carter Page, a former Trump campaign aide with numerous links to Russia. Investigators also conducted clandestine physical searches, the newly disclosed footnotes showed.

In making the case to a judge that Mr. Page was probably a Russian agent, F.B.I. investigators relied in part on information in a dossier of claims about purported Trump-Russia links gathered by Christopher Steele, a former British intelligence agent whose research was funded by Democrats.

Mr. Trump and his allies have sought to discredit the entire Trump-Russia investigation by conflating it with the surveillance of Mr. Page, although that was a small portion of it, because the wiretapping relied in part on the flawed Steele dossier. But the inspector general found that the dossier was not used as part of the basis in the opening of Crossfire Hurricane in July 2016, and only later reached the agents working on the investigation.

The footnotes were declassified at the insistence of two Republican senators, Charles E. Grassley of Iowa and Ron Johnson of Wisconsin. Both have been vocal critics of the F.B.I.’s Russia investigation and pressed the Trump administration to make the new disclosures.

The information also revealed new details about the investigation into Mr. Page, including that top Justice Department officials authorized physical surveillance of him while he was overseas in addition to wiretapping him under the Foreign Intelligence Surveillance Act, or FISA, and why investigators sought a judge’s permission to scrutinize him in October 2016.

“It appears the desire to have FISA authority in place before Monday, Oct. 17, was due, at least in part, to the fact that Carter Page was expected to travel to the United Kingdom and South Africa shortly thereafter, and the Crossfire Hurricane team wanted FISA coverage targeting Carter Page in place before that trip,” one previously classified footnote said.

“The F.B.I. was aware of the potential for disinformation in the Steele election reporting and, in part to address that issue, made some effort to assess that possibility,” the report said. “However, in view of information we found in F.B.I. files we reviewed, and that was available to the Crossfire Hurricane team during the relevant time period, we believe that more should have been done” to examine whether that had happened, Mr. Horowitz’s team added.

The report’s newly disclosed footnotes add context to what prompted some of the worries and rounds of internal discussion among law enforcement officials.

In June 2017, for example — the month of the final wiretap renewal — an American intelligence agency received a report that indicated that two people affiliated with a Russian intelligence service were “aware of Steele’s election investigation in early July 2016.”

The footnotes also said an F.B.I. analyst told the inspector general he was aware of those reports but “had no information as of June 2017 that Steele’s election reporting source network had been penetrated or compromised.”

In addition, the newly revealed footnotes show that the F.B.I. team received three reports in 2017 raising the possibility that one of the sources for the Steele dossier was potentially influenced by a “Russian disinformation campaign to denigrate U.S. foreign relations.”

One source, whose identity remained redacted, offered two of those warnings, including casting doubt on material in the Steele dossier about Michael D. Cohen, Mr. Trump’s former lawyer. The report did not say what was wrong, but the dossier claimed that Mr. Cohen had met with Russian intelligence officials in Prague, which appears to be false.

The F.B.I. was warned a third time in 2017, apparently by a different source, who said that someone with ties to both Mr. Trump and Russia had claimed that reporting in the dossier about Mr. Trump’s activities in Moscow during a 2013 trip was false and the product of Russian intelligence services infiltrating Mr. Steele’s source network. (The dossier contained lurid allegations about Mr. Trump and prostitutes during that trip.)

The newly declassified details also revealed that an F.B.I. agent on the Crossfire Hurricane team received information that a Russian intelligence service may have targeted Mr. Steele’s company in January 2017 — although that was after he put his dossier together.

Mr. Steele relied on a “primary sub-source” who in turn was talking to other people inside Russia to gather rumors and claims about the Russian government’s purported interactions with the Trump campaign.

Some of the most important ways the F.B.I. botched the wiretap applications targeting Mr. Page related to the Steele dossier, the inspector general report found. For example, in mid-January 2017, after the first of three renewals, the F.B.I. interviewed the primary sub-source, who contested how the dossier portrayed his information. But the F.B.I. failed to tell the court in the last two applications for permission to continue eavesdropping on Mr. Page that it had a new reason to be suspicious of the dossier’s credibility.

One footnote said that a person who provided information to Mr. Steele’s sub-source had expressed strong support for Hillary Clinton’s campaign, and scattered through the footnotes are a series of suggestions that one or more of the people believed to have talked to the main sub-source most likely had connections to Russian intelligence services.

Such ties created a risk that the Russian intelligence services deliberately planted misinformation in Mr. Steele’s network. Complicating matters, however, is that Mr. Steele was trying to understand what Russian intelligence services were doing with regard to the Trump campaign. He would seemingly need his sources to be in contact with people with connections to those services or the Kremlin who were in a position to know what was going on.

Jimmy Kimmel Roasts The ‘Trumpiest Thing Trump Has Ever Done’