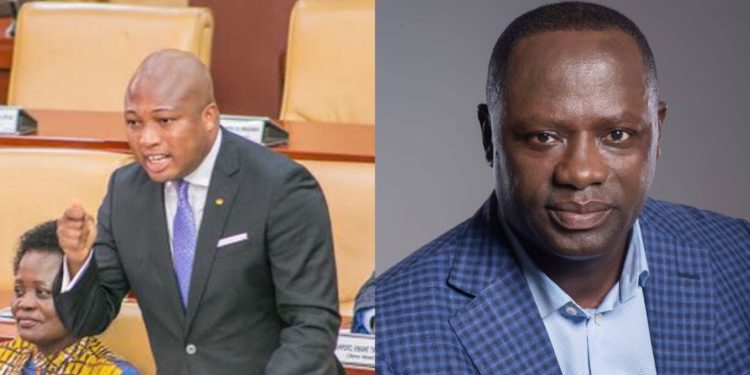 77
SHARES
426
VIEWS
Share on FacebookShare on TwitterShare on WhatsApp

The horror that was visited on civilians by Akufo Addo and his thugs during the 2020 General elections which led to the death of some 9 unarmed civilians will live in the memories of Ghanaians.

While the NDC and other CSOs has condemned the act and ask for government to investigate the matter and prosecute those who did the shooting leading to the mass killing of Ghanaians, Akufo Addo is yet to react to these request.

In line if this, Two opposition lawmakers, Samuel Okudzeto Ablakwa and Emmanuel Armah-Kofi Buah have jointly petitioned the Commission on Human Rights and Administrative Justice (CHRAJ) to investigative the deaths that occurred during last year’s elections.

“The Minister for the Interior is the appointee of His Excellency the President of the Republic of Ghana and has oversight responsibility for the Ghana Police service.

“The Minister of Defence is the appointee of His Excellency the President of the Republic of Ghana and has oversight responsibility for the Ghana Armed Forces.

“The Chief of Defence Staff is by virtue of article 213 of the 1992 Constitution,  responsible for the operational control and command of the Ghana Armed Forces. During the general elections held in the Republic of Ghana in or about December 7, 2020, the Ghana Police Service and the Ghana Armed Forces established a National Election Security Taskforce (NESTF) to support the effort to ensure smooth and transparent conduct of the said elections. This was necessary for purposes of safeguarding the     democratic values and principles of free and fair elections.

“This effort was also necessary to provide citizens of the Republic of Ghana including voters with security during the conduct of the elections. Apart from the NESTF, there were other members of the Police Service and Ghana Armed Forces who played diverse roles during the period of the 2020        Presidential and Parliamentary elections.

“The complaint is restricted to the Techiman South, Odododiodio, Ablekuma Central, and Savelugu constituencies in the Bono East, Greater Accra and Northern Regions of the Republic of Ghana respectively.

“The complaint relates to the manner in which the Ghana Police Service and the Ghana Armed Forces discharged their constitutional and statutory mandates in the constituencies mentioned above.

In the case of the Ghana Armed Forces, their conduct in furtherance of the purpose of the NESTF did not promote the development of Ghana as prescribed by article 210(3) of the 1992 Constitution, as their conduct caused damage to life, limb and property.

Regarding the Ghana Police service, the manner in which they carried out their functions to further the purpose of the NESTF undermined their constitutional        obligation under article 200(3) of performing their “traditional role of maintaining law and order.”

During the polls, a total of 61 electoral and post-electoral incidents were recorded nationwide, the Ghana Police Service announced in a statement on Wednesday, December 9, 2020.

The statement said 21 of the incidents were true cases of electoral violence, six of which involved gunshots, resulting in the death of five.

The Police’s statement further noted that there were several fake news about supposed electoral violence.

“However, between 0700 hours of 7th December, 2020 and 1000 hours of 9th December, 2020; the Joint Operation Centre of the NESTF has recorded a total of sixty-one (61) electoral and post electoral incidents nationwide. Twenty-one of the incidents are true cases of electoral violence, six of which involve gunshots resulting in the death of five,” the statement from the Police emphasized.

In the Techiman South constituency, the petition said “At about 3:00 pm [15:00 hours GMT], on the 8th day of December 2020, armed officers attacked, violently abused, and in some instances killed civilians in the Techiman South constituency. The victims of their actions were unarmed civilians who had turned out peacefully in front of the Brokyepem Hall close to the Municipal Assembly to exercise their franchise.

“The officers carried out the acts referred to in paragraph 1 above, by indiscriminately shooting into the crowd of voters and observers at the said polling station. It is important to underscore the fact that at the time the uniformed officers decided to, and indeed indiscriminately shot at the voters and observers at the Brokyepem Hall in the Techiman South constituency, there was no imminent and compelling threat to justify the use of, let alone the excessive and rather reckless use of such force against the unarmed civilians who were lawfully exercising their constitutional right at the polls.”