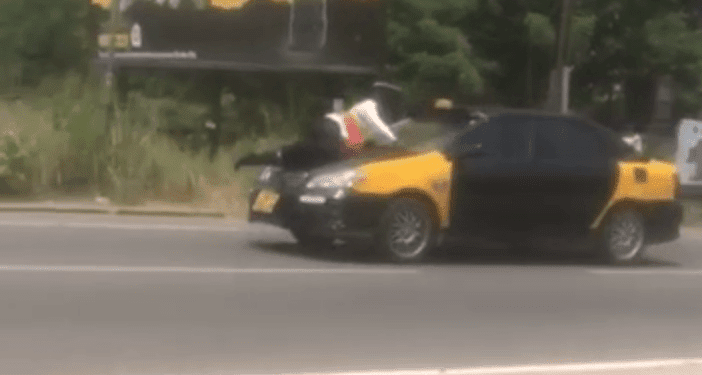 91
SHARES
504
VIEWS
Share on FacebookShare on TwitterShare on WhatsApp

The Koforidua Circuit Court B has sentenced Daniel Ofori, the taxi driver, who drove a police officer on his bonnet for 300 metres, to two years imprisonment.

Both sentences will run concurrently.

The court presided over by Her Ladyship Mercy Addei Kotei, also withdrew his driver’s license for 5 years.

The incident, which caused Mr. Ofori’s troubles happened on February 28, 2020.

In a widely circulated video on social media, Mr. Ofori was seen in the taxi on top speed with a police officer holding onto his bonnet.

Briefing the court, the prosecutor, Inspector Geshon Dafeamekpor, said the taxi driver, who was being monitored by the police MTTD for other road traffic infractions was spotted at the Galloway traffic and ordered to park, but he refused and drove away with Sergeant Asante Peprah who jumped on the bonnet in an attempt to avoid being ran over by the taxi driver.

Daniel Ofori was however forced to stop after another driver blocked his path, leading to his arrest.

DSP Ebenezer Tetteh, who speaks for the police in the Eastern Region believes this sentencing will serve as a deterrent to other recalcitrant drivers.

“This is a warning to other drivers, especially the recalcitrant ones whose attitude and demeanour on the road is repugnant not only to road traffic users and law enforcement officers but even to pedestrians.”