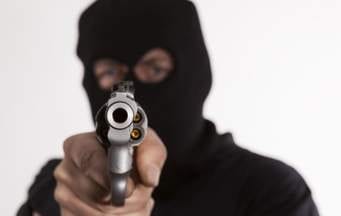 Issue of security seems to have broke down in Ghana as no day passes without report of armed robbery cases or murder cases.

In latest development, One person has been shot by highway robbers Monday morning on the Koforidua-Akyem Kukurantumi road in the Eastern region.

Reports say the robbers mounted roadblock at about 4:30am at Barfuor Nkwanta near the Sorkode Dwaso junction stretch of the road where Police mostly conduct checks on commuting vehicles.

About 20 vehicles were allegedly robbed by the suspects who made away with a total of Ghc50,000, according to a victim.

I thought they were Police but all of a sudden I heard gunshot then I told the driver to stop. They came to the car and took Ghc4000 from me I was going to buy cement blocks with it. Another man said they took away Ghc40,000 cash he was carrying for some business. Other passengers were robbed of their monies and mobile phones,” another victim narrated.

The passenger who was shot has been rushed to a Hospital in Koforidua.

The incident created gridlock on the road as vehicles could not cross to either Koforidua, Akyem Tafo or Bunso.

The highway robbers are believed to be the same gang terrorizing residents in Abuakwa North Municipality.

On Wednesday, April 28,2021, the robbers attacked a Guest House and a gas filling station at Akyem Kukurantumi at about 8:00 pm amidst firing of gunshots.

A basic school headmaster has reportedly been murdered by gunmen in Cape Coast among other issues of crime currently ongoing in Ghana.

The number of robbery cases reported in the last one month alone is uncountable.