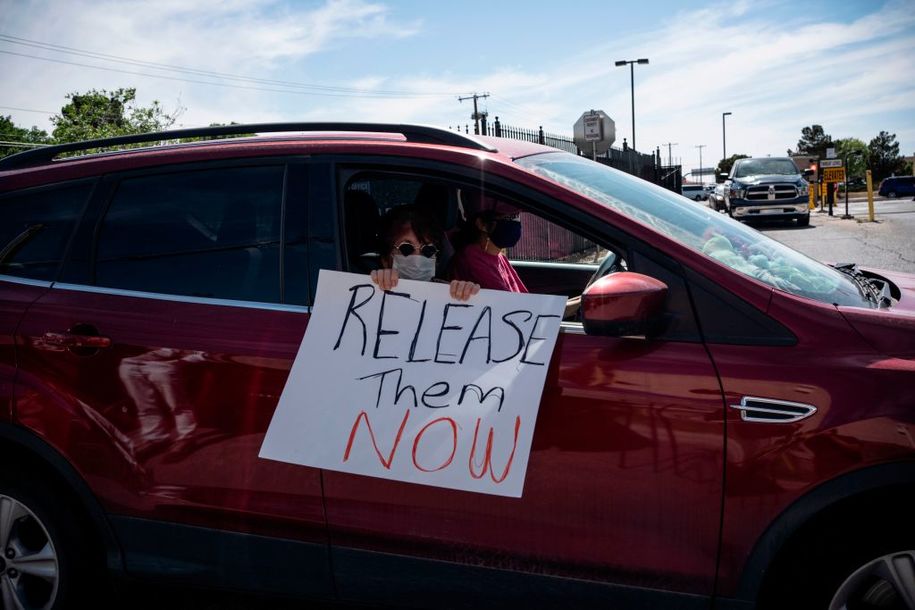 Behzad Jalili, among the 72 detained people moved from Pike County Correctional Facility in Pennsylvania and Buffalo Federal Detention Facility in New York, said he was placed into a dorm where the beds were close together when some of the detainees who had been moved along with him began to show symptoms. “Jalili fears the flight, and a subsequent bus ride, put him and the others at risk,” the report continues.

“Government officials maintain that the move was made to create the conditions necessary for social distancing within detention centers housing more than 30,000 immigrants across the country,” but advocates have repeatedly said in litigation against the agency that there’s no such thing as social distancing while in detention.

“Immigrants … generally sleep in packed dormitory rooms on bunk beds bolted to the floor only a few feet from each other,” the American Civil Liberties Union (ACLU) of Northern California said in a suit seeking the release of hundreds of people from two California facilities. “They use shared bathrooms, shoulder to shoulder with someone at the next sink and arm’s length from the next stall. They line up to get meals in crowded cafeterias, and are not provided resources for adequate sanitation and hygiene.”

Federal immigration officials have the power to release people to their own homes to practice social distancing there, but have freed only about 700 out of the 30,000 people in custody right now—and are refusing to move significantly beyond that 700. “More than 5,500 of these detainees have established that they fled persecution or torture,” the House Committee on Oversight and Reform said earlier this month, “and more than 14,000 have no criminal convictions or pending criminal charges.”

Paul Spiegel, director of the Center for Humanitarian Health at Johns Hopkins Bloomberg School of Public Health, criticized the agency for not testing detainees before moving them, and said the best way to reduce ICE population sizes is not by shuffling people around, but by releasing them. “They shouldn’t be putting people on planes and buses where we know there can’t be a 6-foot rule,” he told BuzzFeed News. “The longer the trip, the more chance of getting infected. We may not be able to definitively say people were infected because of this but there is a decent likelihood that was the case.”

Alvis Doras, among those moved from New York, has lived in the U.S. since he was just three but said he’s so afraid of the sick men around him that he hopes he gets deported soon. “I feel bad,” he told BuzzFeed News. “What if something happens to me? They mixed me with people who had corona and are now out. I try to stay in my bed and cover up.”

Deaths soar in country that didn't lock down. Officials identify big reason why.

Deaths soar in country that didn't lock down. Officials identify big reason why.