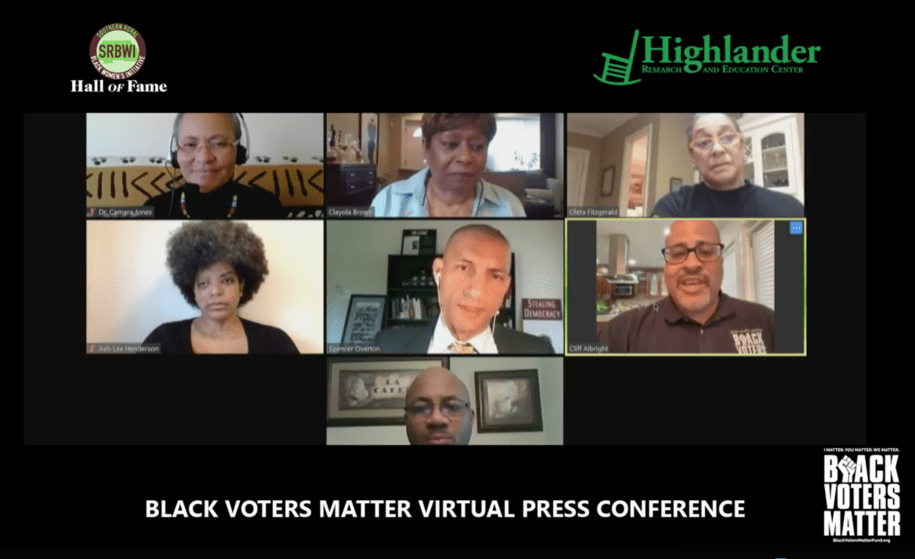 1. An immediate rescission of the reopening of our states and reinstatement of shelter-in-place orders.

2. Safety plans for each state before they reopen, which includes resources for PPE masks for workers.

4. Increase public health model testing, tracing, and treatment with specific support to communities that are low-income and communities of color.

5. The immediate expansion of Medicaid in each state.

6. Enhanced unemployment support for residents that have lost jobs or cannot work.

Oleta Garrett Fitzgerald, executive committee member of the Southern Rural Black Women’s Initiative, placed the current demands within the context of ongoing organizing efforts to expand Medicaid and improve conditions for low-wage workers. “These governors have not instilled in us any confidence that they will be able to keep our people safe whenever they go back to work,” said Fitzgerald. “We call on these governors to show us a plan that will ensure that when our people are called back to work, and when they have to make these hard decisions about going back to work […] there’s a plan for that.”

Calling for state leaders to put health over profit, the groups have launched a petition. The overarching message is grounded in the interdependent nature of deeply impacted communities, public health and safety, and the economic concerns of workers and their families.

Dr. Camara Phyllis Jones, a senior fellow with the Satcher Health Leadership Institute and the Cardiovascular Research Institute at Morehouse School of Medicine, called out the racism in the response and planned reopening of states.

“There is a system in this country that structures opportunity and assigns value by race,” said Jones. “That is racism, and racism is accounting for this disproportionate impact. So now that we know that we are disproportionately impacted it seems like some people are saying ‘oh okay, if it’s just going to be impacting them let’s open up.’” Jones reiterated at several points that people should not be sent back to work without a clear public health strategy, including proper safety equipment and a testing protocol.

Other leaders spoke about the right way to work toward an economic recovery, as governors in Tennessee and Mississippi have announced the creation of economic recovery task forces composed of some mixture of government and business leaders. “Having meaningful community representation of these groups, as well as labor, is critical,” said Spencer Overton, president of the Joint Center for Political and Economic Studies. “The notion of excluding labor in a conversation like this isn’t really a joint effort.”

Overton dug deeper into some of the economic concerns raised by the pandemic, citing a recent McKinsey study finding “that 39% of all jobs held by Black Americans—compared with 34% held by white Americans—are now threatened by reductions in hours or pay, temporary furloughs, or permanent layoffs, totaling 7 million jobs.” Clayola Brown, president of the A. Philip Randolph Institute, compared the rising unemployment rate to that of the Great Depression, when 24%-25% of the working population was out of work compared to an estimated 20% of the working population unemployed today.

Georgia Gov. Brian Kemp received backlash from all corners of the state and country after announcing his plan to “reopen” the state on Friday, April 24, including several businesses such as tattoo parlors, barbershops, and nail salons. Although local government leadership has been preempted from enacting their own restrictions, some—like Atlanta Mayor Keisha Lance Bottoms—have encouraged residents to remain home. A member of Kemp’s coronavirus task force, Bottoms had not been notified about the plan to reopen before it was announced. The mayor of hard-hit Albany in southern Georgia also was not contacted. While reports indicate Trump expressed support for Kemp in private, yesterday afternoon Trump publicly distanced himself from Kemp’s decision to reopen.

Latosha Brown, co-founder of the Black Voters Matter Fund, stressed the interconnectedness of the issues and noted that regional concerns impact the entire nation.

“This isn’t about the south,” said Brown. “We know that oftentimes when we’re seeing regressive policies, they test it first in the south, and then it starts spreading all over the country. So right now we need you to join in solidarity with us […] If they’re able to get away with that in Georgia and say that workers are disposable, Michigan you’re next.”

Anoa Changa is Prism’s electoral justice staff reporter. Follow her on Twitter @thewaywithanoa.
Prism is a nonprofit affiliate of Daily Kos. Our mission is to make visible the people, places, and issues currently underrepresented in our democracy. By amplifying the voices and leadership of people closest to the problems, Prism tells the stories no one else is telling. Follow us on Twitter @ourprisms and on Facebook.

Ultra-Orthodox and trans: ‘I prayed to God to make me a girl’