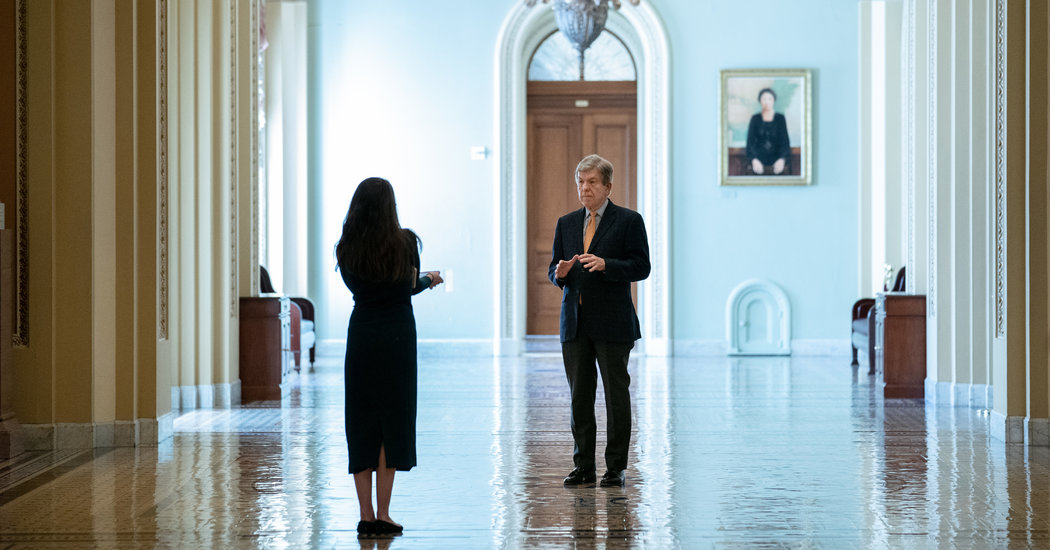 WASHINGTON — Treasury Secretary Steven Mnuchin and top Democrats negotiated on Friday to break an impasse over replenishing a stimulus program to help small businesses weather the coronavirus pandemic, even as some Republicans privately worried that Mr. Mnuchin would concede too much in his zeal to unfreeze a critical aid initiative.

Top Republicans had steadfastly refused to discuss a deal with Democrats on their demands to couple an infusion for the small-business program — the Paycheck Protection Program — with more money for states, cities and hospitals to combat the virus. But after the funding lapsed on Thursday, they expressed the first hints of openness to accepting additional hospital or grant funding beyond the administration’s request for $250 billion to keep the small-business program afloat.

“I’m open to that discussion being very narrowly focused on what we did in Phase 3 that’s already proven to be not quite hitting the mark we hope to hit,” said Senator Roy Blunt, Republican of Missouri, referring to the $2.2 trillion stimulus package that was the third spending measure enacted to respond to the coronavirus crisis.

Still, with Mr. Mnuchin pursuing talks primarily with Democrats, there is lingering apprehension among some Republicans on Capitol Hill that in an effort to limit the economic fallout from the spread of the coronavirus and restart the program, Mr. Mnuchin will go too far in accommodating the Democrats and agree to policies they cannot support.

In private conversations, top Republican officials said that Mr. Mnuchin’s concessions during previous negotiations on coronavirus legislation — in particular, an agreement he struck with Speaker Nancy Pelosi to significantly expand federal paid sick leave, and a subsequent deal with Senate Democrats to substantially increase jobless aid — had intensified skepticism about whether he could strike a deal that all Republican senators could support.

Some of them said they regarded Mr. Mnuchin as essentially a Democrat, and one senior Republican who, like others interviewed, did not want to be named discussing differences between Senate Republicans, said the Treasury secretary did not approach the issues currently being debated from a Republican perspective.

Republicans have complimented Mr. Mnuchin’s accessibility — he has repeatedly joined calls with both conferences over the past two months to discuss legislation related to the coronavirus outbreak — and in the past, they have specifically tapped him to represent them in critical budget and spending negotiations with Ms. Pelosi, which produced deals that President Trump ultimately signed into law.

But the Republican worries about the Treasury secretary, who has emerged as Mr. Trump’s point man on the economic response to the pandemic, reflects a steep challenge for the administration as it works to restart the Paycheck Protection Program, which provides loan guarantees to small businesses that keep employees on their payrolls, and looks toward future rounds of government coronavirus relief that will have to be negotiated with Democrats.

The concern has been heightened by the extraordinary logistical challenges caused by the pandemic: With lawmakers scheduled to remain out of Washington until May 4 at the earliest, any effort to approve an emergency funding infusion would require the support of all 100 senators, as opposed to the 60 votes typically needed to pass legislation.

With any single lawmaker capable of blocking legislation from moving forward, the continuing talks are a test of Mr. Mnuchin’s ability to help wrangle an agreement that is palatable not just to the administration and the Democratic majority in the House, but rank-and-file Republicans in both chambers.

“Every administration needs a senior official who can work with the other party, so it’s helpful to the president to have that,” David McIntosh, the president of the Club for Growth, an anti-spending conservative advocacy group, said in an interview. “But I think Mnuchin needs to be careful that he doesn’t make another mistake, and fully understands what the Democrats are trying to do.”

As Republicans have attacked them in recent days for standing in the way of quick approval of the $250 billion the Trump administration requested to replenish the small-business loan program, Democratic leaders have stood firm in insisting on the added funds they have proposed, noting that they were still talking with Mr. Mnuchin.

“We’re hopeful they will come back with something that strikes a balance in what we know we need to do,” Ms. Pelosi said of the administration during a weekly telephone news conference with reporters on Thursday, ahead of another round of talks between Mr. Mnuchin, his staff and aides to Ms. Pelosi and Senator Chuck Schumer of New York, the Democratic leader.

Asked on Thursday about how a deal would be received, Senator Mitch McConnell, Republican of Kentucky and the majority leader, remained noncommittal, saying, “We’d take a look at it.”

It was Mr. McConnell who first announced last month that Mr. Mnuchin would lead talks for Republicans on the coronavirus relief package that preceded the stimulus, which included free testing, health care and food assistance, and the paid leave benefit that so rankled Republicans.

Mr. McConnell counseled his members to “gag and vote for it,” but then insisted on taking a far more active role in negotiating the stimulus package that followed, which ultimately topped $2 trillion. Such guidance would not be feasible now that the Senate is not set to formally return until May, and legislation can only be passed on a unanimous basis, allowing any single lawmaker to block it.

Speculation that Mr. Mnuchin is a Democrat has simmered over the years, in part because of his background as a Hollywood film financier who resides in Los Angeles. Mr. Mnuchin’s father has expressed displeasure that his son works for Mr. Trump. And Mr. Mnuchin’s wife, Louise Linton, broke with him this year when she used social media to defend Greta Thunberg, the climate activist, after the Treasury secretary criticized Ms. Thunberg at the World Economic Forum in Davos, Switzerland.

For his part, Mr. Mnuchin denies that he was ever a Democrat. Like many wealthy investors, he has donated to both Republicans and Democrats over the years.

“I have been absolutely a Republican,” Mr. Mnuchin said in 2018 at an event at the Economic Club of Washington D.C., noting that while he had written checks to Democrats over the years, “I’ve always been a Republican.”

People close to Mr. Mnuchin have described him as the consummate pragmatist in negotiations, putting political ideology aside and focusing on finding the common ground needed to strike a deal. One person familiar with his style suggested that Mr. Mnuchin would most likely try to offer Democrats just enough to be able to claim victory, while clinging as closely as possible to the framework that was agreed to last month in the stimulus measure.

But that compromise still leaves a bitter taste for some Republicans.

As talks on the package entered a critical phase, Senator Ron Wyden of Oregon, the top Democrat on the Finance Committee, told Mr. Mnuchin and two top Republican senators that his party wanted assurances that the bill would include unemployment benefits equal to full wage replacement for average workers — a proposal that other administration officials and Republicans had rejected.

Mr. Mnuchin, without consulting his Republican partners — Senator Charles E. Grassley of Iowa, the committee chairman, and Senator Rob Portman of Ohio — quickly agreed to the demand, according to three officials with knowledge of the talks who would discuss them only on the condition of anonymity.

The result was an agreement in which the federal government provides an extra $600 per week in unemployment pay for 16 weeks for millions of jobless workers, an amount that when added to basic benefits would exceed regular pay in some cases. The issue became a final sticking point before passage of the measure, when a group of conservative Republican senators balked, saying there must have been a mistake. They eventually relented, but not before trying to strip the generous aid, allowing Republicans to register their opposition with a vote on the Senate floor.

Democrats, for their part, say the conversations with Mr. Mnuchin have yielded progress toward resolving the impasse. Ms. Pelosi has pressed ahead with them, warning that the administration’s request would not pass through the House without some changes.

“It’s just a matter of talking — if we talk, I think we can get an agreement done,” said Senator Benjamin L. Cardin, Democrat of Maryland and one of the proponents of the new program. “I think we can resolve this.”

Taylor Swift Cancels All 2020 Concerts And Appearances Over Coronavirus Crisis