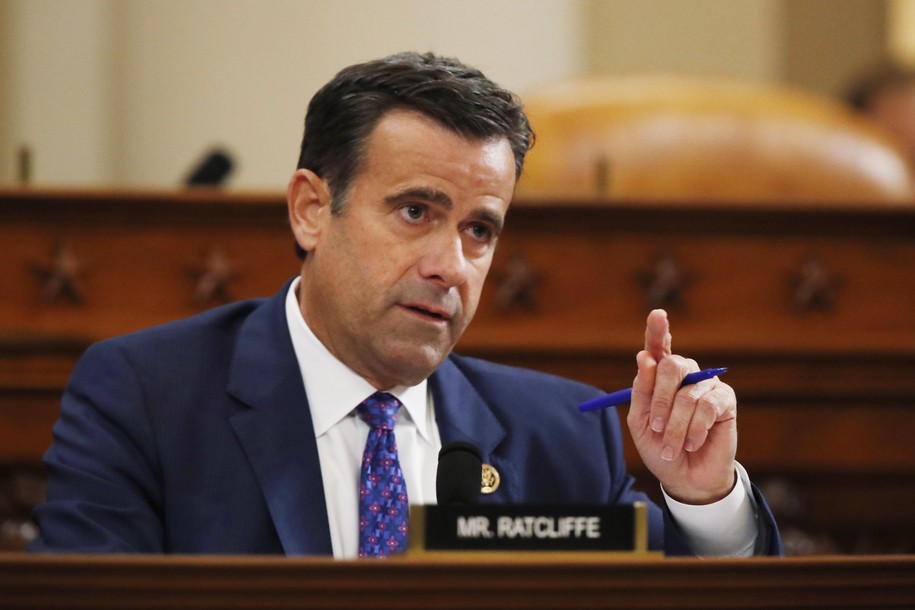 CNN reports the Senate Intelligence Committee, led by Sen. Richard Burr, intends to hold a confirmation hearing for Ratcliffe next week. Burr has been mired in his own, far worse scandal of late after it was disclosed that he responded to secret government briefings on the likely severity of the upcoming pandemic by dumping his own stock market holdings before the resulting market crash. Burr had opposed Ratcliffe’s prior nomination last year, but has now evidently changed his mind.

CNN implies Burr’s change of heart might be because he has been under heavy attack from Trump, who views him as disloyal for his unambiguous recognition that yes, the Russian government did indeed act to manipulate the 2016 elections. But it may be that Burr, at least in theory being investigated by the Justice Department for his stock dumping, has come to the same post-impeachment conclusion as every other non-Romney Senate Republican: In for a penny, in for a pound. If we’re going to erase Trump’s proven extortion attempt against a foreign nation, using the tools of government to brazenly abuse the office in a manner long recognized, unambiguously, as corrupt, it’s impossible to argue that merely installing a Trump-loyal sycophant of sketchy record as top intelligence official is an authoritarian-minded bridge too far.

But CNN also implies that the move forward to install Ratcliffe is because the current part-time acting Trump pick, odious hyperpartisan Twitter troll Richard Grenell, is deemed so universally unacceptable that both parties would rather install a rotting tuna in the post than leave him in it. There may be more truth to that one.

Ratcliffe is, in typical Trump adviser fashion, about the last person you would want in the role of director of national intelligence. He has little relevant experience. As a House Republican, he has proven a pathetic and dishonest partisan, aggressively promoting Trump-favoring conspiracy theories like the notion that the intelligence community’s probe of 2016 Russian election hacking was actually a Democratic-led plot against Trump. These conspiracies were enough for Senate Republicans to signal Ratcliffe’s nomination would be a heavy lift even for them last time around, but it was the discovery that Ratcliffe had “embellished” his resume by a considerable amount that led to his eventual withdrawal from the nomination.

Ratcliffe had claimed terrorism experience, claiming that as U.S. attorney he had “convicted” terrorism-linked individuals—but the federal officials who actually prosecuted the case disputed that, saying they couldn’t identify Ratcliffe as having “any” role in that prosecution. Ratcliffe similarly claimed he “arrested over 300 illegal immigrants on a single day” as U.S. attorney—the case he was apparently referring to actually swept up only 39 workers, was widely considered an embarrassment and a failure, and had no apparent involvement by Ratcliffe whatsoever.

That was enough, back in August, to send the seemingly perpetually dishonest Ratcliffe packing. After Trump’s renomination, however, it seems that everyone involved, from Ratcliffe to Burr to Trump, have decided that “shame” is no longer something Republicans can have.

The confirmation hearing will be eventful, however, with at least Democratic senators eager to probe Ratcliffe’s claims that the investigation into Russian hacking was a Democratic plot against the glorious ascendant Trump. And Republican estimations that Ratcliffe’s confirmation can be sneaked through a busy news cycle might instead find that news-starved, entertainment-starved Americans stuck at home might not have anything more pressing to do than watching Richard Burr and other Republicans again humiliate themselves for Donald’s benefit.

Amazon investors told to ‘take a seat’ as demand jumps

On coronavirus pandemic patrol with the paramedics of Paterson

On coronavirus pandemic patrol with the paramedics of Paterson