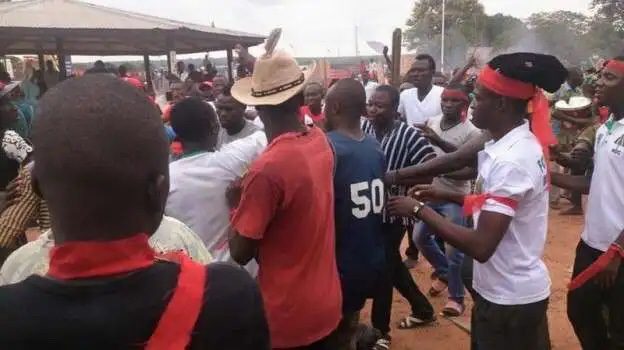 231
SHARES
1.3k
VIEWS
Share on FacebookShare on TwitterShare on WhatsApp

The Abodom Police Command in the Ashanti Region is investigating an alleged assault case reported by one Okatakyie Kwame Opoku Agyemang, an NPP executive of the Bekwai Constituency

Reports suggest there was a brawl during an electoral area meeting by the New Patriotic Party (NPP) held at Bekwai Dadease and Adwumam electoral areas in the Bekwai municipality.

The meeting, which was expected to be peaceful and smooth, was abruptly truncated after one of the constituency executives landed slaps on the face of his colleague Tuesday evening.

The Deputy Constituency Youth Organizer for Bekwai, Francis Siaw, was picked up by police after the victim, Okatakyie Kwame Opoku Agyemang, lodged a formal complain of assault at the Abodom Police Station.

Opoku Agyemang explained that “during an electoral area meeting that was supposed to precede the constituency delegates’ conference, the Deputy [Youth] Organizer Francis Siaw from nowhere landed two slaps on my face. I didn’t retaliate because [I] know the law so I didn’t want to implicate myself. I reported to the police and immediately he was picked up”.

Explaining his side of the story, suspect Francis Siaw told host of the show Aduanaba Kofi Asante Ennin that “Katakyie Kwame Opoku Agyemang had been disqualified and expunged from his post as electoral area coordinator because he campaigned for an individual candidate during the 2020 elections and as our party constitution demands, we did exactly that only for him to surface at Tuesday’s meeting in a capacity as Electoral Area Coordinator. So he insulted me and [I] lost my cool and slapped him”.

Kwame Opoku Agyemang, who has been accused of turning his back on the party for an independent candidate in 2020, denied the allegations and quizzed why he has not been served an official letter of dismissal or demotion.

But later joining the discussion via phone, NPP Ashanti Regional First Vice Chairman Kwabena Nsenkyire, who backed the Constituency Deputy Organizer’s deeds, further threatened the victim that “your ordeal would have been very brutal if I was there because per our party laws, you are not a member, so why do you have to invade our meetings?”

Kwabena Nsenkyire further urged the Bekwai Constituency executives to deal with such “traitors” anytime they show up at party meetings.

The Abodom Police Command later bailed the Constituency Deputy Organizer after his statement was taken.

The issue is still under investigations to settle the rising tension within the Constituency.

The Bekwai Municipality even before the 2020 elections was earmarked as one of the hotspots.