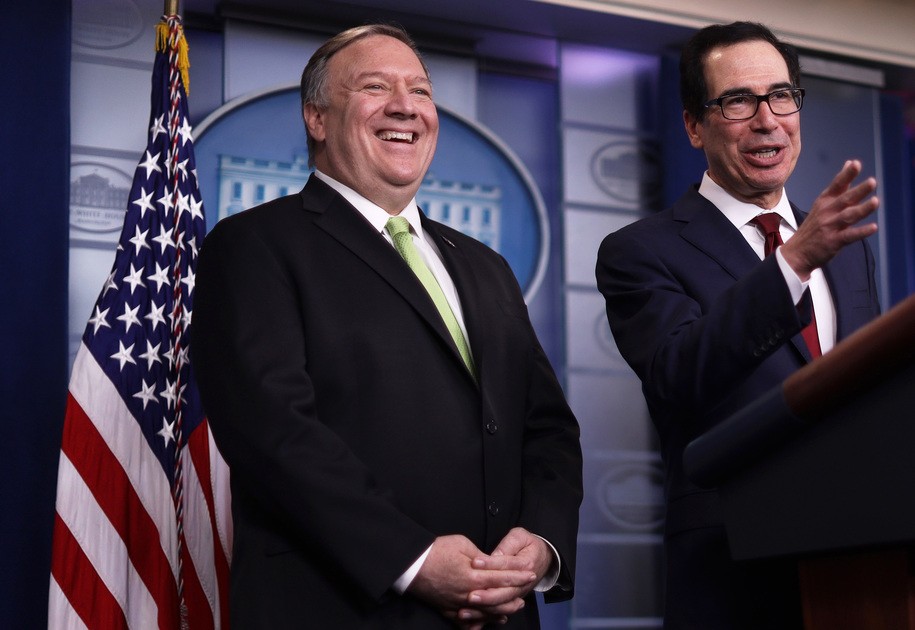 Yes, it’s a complete troll move and everybody knows it. The United States is now known on the world stage for being the world’s greatest exporter of bullshit, and Pompeo’s performances have been reliably Trumpian in their … unsubtlety. You can’t presume we’re not part of an international accord simply because we’ve said repeatedly that we have withdrawn from it! Maybe we were lying! We probably were lying!

As bizarre as it sounds, then, this is not exactly new behavior from Pompeo. The Trump administration has argued that the deal no longer applies, because they say so—but when it comes to the sanctions imposed by the deal, threatened by the deal, or reversed by the deal, Pompeo and team have argued that all of those sanctions should now apply because Reasons. It’s only the U.S. obligations that have gone by the wayside; on everything else, the world remains obligated to Do What Donald Says.

The Times repeatedly refers to the Pompeo plan as an “intricate strategy,” part of the Times‘ continued insistence on portraying the Trump team’s endless reversals and dishonesty as strategic, rather than flailing. The plan does not seem terribly “intricate,” however. It is just petty.

Having failed to convince even our close international allies to abandon the Iranian nuclear deal on Donald Trump’s say-so, overall administration “strategy” toward Iran still remains the same. It is centered around forcing Iran to itself break the accord by putting it under such untenable sanctions and military pressure that they are all but obliged to do so, at which point Mike Pompeo will jump to his feet to triumphantly declare that see, that nation over there cannot be trusted, just like we told you.

Presuming Mike Pompeo stays in the position long enough to say so, that is. The man is getting a bit old in the tooth, in an administration defined by Donald Trump’s eagerness to pin each failed policy on whichever sucker next walks into the room. He must be a spectacular suck-up, in private, because his public performances leave him looking like an untrained terrier who’s been entered in a dog agility competition but has no earthly idea what to do.

He’s definitely eager to please, you’ve got to give him that. Maybe if he just flails around randomly he’ll accomplish whatever his owner intended here?