Texans honk outside ICE facilities in protest of ongoing detention 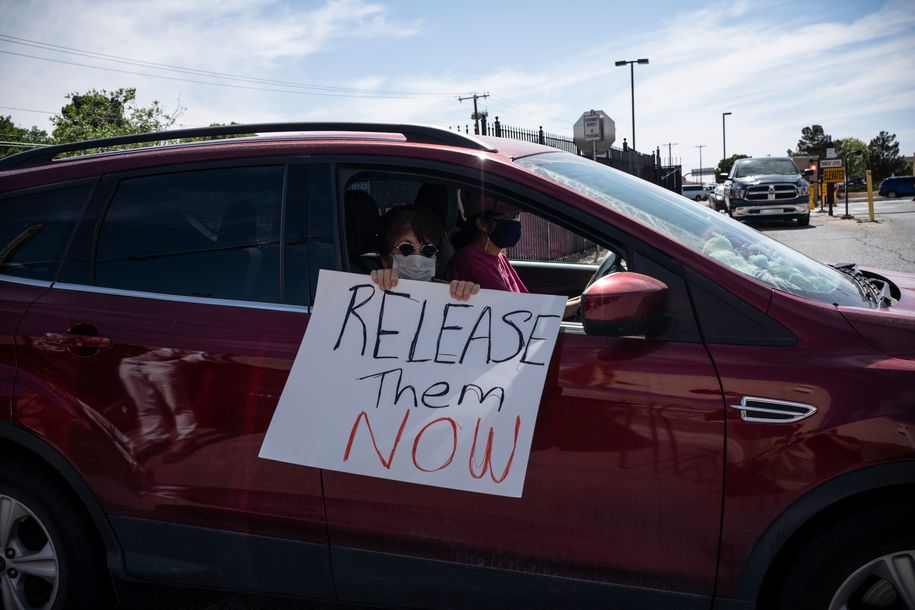 “What’s happening in Texas right now?” Never Again Action continued. “Guards at ICE detention centers are infecting the immigrants locked inside, and ICE is covering it up.” Texas Observer reports that while workers inside facilities in the state have tested positive for COVID-19, ICE isn’t reporting them because they’re contractors. Because the virus can really tell the difference between employee and third-party worker, or something. “This means the list of infected employees who are potentially interacting with detained persons and facility staff is incomplete,” Texas Observer tweeted.

This also means detainees are at serious risk, considering ICE can’t properly care for people when there isn’t a pandemic. San Antonio Express-News reports that in San Antonio, activists drove to a local ICE office with signs reading “free them all” and “prevent mass death” to demand their release. “Security guards blocked drivers from pulling into the parking lot of the Jefferson Bank building near Loop 410 and Harry Wurzbach Road where the ICE office is located,” San Antonio Express-News said. “So at least 40 cars instead piled into the parking lot of the neighboring CatholicLife Insurance building, where drivers proceeded to blare their horns in a deafening cacophony.”

If ICE collaborators like @CoreCivic think theyÃ¢ÂÂre going to hide behind the pandemic, theyÃ¢ÂÂve got another thing coming.

Just in Texas, just today, there are actions happening in 5 cities across the state.

Keeping people detained in close quarters & refusing them the ability to go home is not only inhumane, it is a public health hazard.

Austin is demanding Gov @GregAbbott_TX use his power & influence to release people in ICE detention before it’s too late! #FreeThemAll pic.twitter.com/CThchoRKsE

1 At the Hutto Detention Camp alone there at over 500 women at immediate risk. Given the number of outbreaks and deaths that occur in detention every year, we know that ICE and CoreCivic will not protect detained women or the community around them during this unprecedented time. pic.twitter.com/KrmRE2Cv5o

Among those detained in Texas are children and parents at two migrant family jails, some of whom have sued for their release. One plaintiff detained at the South Texas Family Residential Center in Dilley for nearly two months now said she and others lack increased access to soap or hand sanitizer, and share everything from sleeping quarters to bathrooms. “I fear the Corona virus will spread quickly in this jail if one person is infected,” she said in the suit. “I fear for my life, and the life of my daughter and unborn child, if we remain detained. I believe our safety requires our release.”

A Haitian asylum-seeker who is also being jailed at Dilley said officials have taken no steps to protect them from the virus. “My son and I are in a room with about nine other people,” she said in the suit. “We sleep very close together, and there is very little space to maintain distance from other people when we are in the room. When I am laying down in my bed, I can touch the bed next to me. My son has a cough and other people in our room also have a cough. They have never quarantined the people who have a cough,” she explained in the lawsuit.

There is no such thing as social distancing in detention, and every additional day that ICE has refused to release detainees, including young children and the medically vulnerable, is another day that ICE puts them at added risk of death. “We’re all trying to stay as safe as possible,” RAICES’ Debra Hernandez told San Antonio Express-News. “But we need to send the message that, if we don’t let these people out of detention centers, everybody’s going to get COVID.”