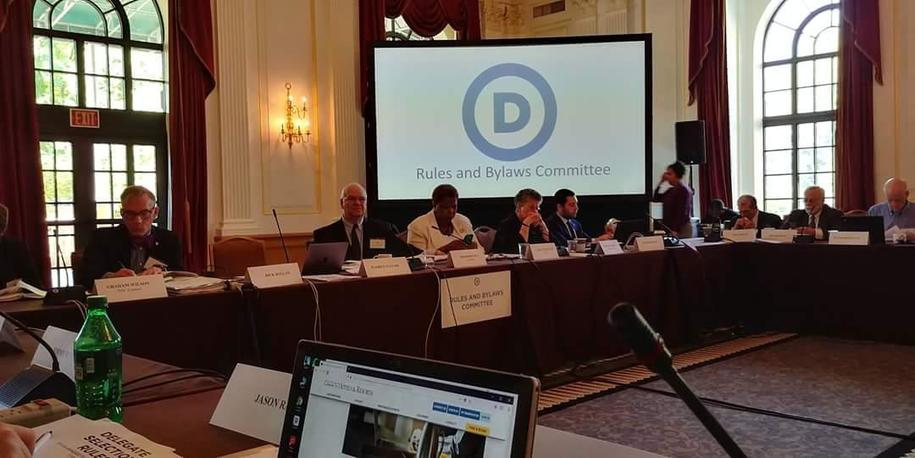 In my 2017 diary, I was covering the relationships between the national (DNC), state, and county organizations within the party.  Daily Kos election’s own David Jarman wrote a fantastic piece about the DNC, DCCC, DSCC, and DLCC. You can find it here. Both of these together give a fair understanding of the party structure. Still, when we are in a presidential year and not thinking about special elections, we should take time to look into how the interactions shape what our party wants to be going forward. So, what are these conspiracies? What makes sense and what doesn’t? In 2020, what has changed?

There are some initial realities we have to cover before we can move on.

One of the problems that struck the Unity commission and others who argued for systemic changes within the Democratic Party is that all party efforts, Democratic or Republican, do not necessarily change the guidance in any state in America. If the Democratic National Committee (DNC) tomorrow said we will not accept caucus results, as an example, it would not cause state governments that are unwilling to pay for primary costs to do so. Party procedures simply do not go above state statute.

One part of Jarman’s writing is particularly important:

What the DNC isn’t is a shadowy umbrella organization that controls all the other alphabet committees. The DCCC or DSCC, for instance, aren’t appendages of the DNC, and the DNC doesn’t give marching orders to them. In fact, the other organizations are rivals of the DNC, to the extent that they’re competing against each other for large donors’ contributions, and they zealously guard their own turfs.

If the DNC showed up and tried to take command of a particular House race, the DCCC would tell them in no uncertain terms to get bent. The DNC doesn’t send out messaging instructions or set standards for what kind of candidates the party should run. Beyond the platform writing process every four years, it doesn’t really have anything at all to do with what kind of ideology the Democratic Party promulgates.

This is where we need to get into some important process points. State parties themselves have their own platforms. The national party has a platform. The state party platforms are set by state committee members. The national party platform is set through a process that culminates at the convention, where each candidate with delegates appoints them into that committee to reach a conclusion. In most cases, the national platform is fairly stable, with changes being made around the edges—but these often progress larger changes. You will NEVER see radical turns in a convention toward, say, a very conservative ideology on the platform, regardless of who is nominated.

The platform is also not a constraint. Candidates at all levels are free to agree to all of it, some of it, to go farther than it in some areas, and so on. This is because, again, while the party can control documentation and what our goals are, if someone wants to go farther than those goals, good for them. If they choose to run against elements of our platform, it is nearly impossible to remove someone from a party as that is a right they can take as anyone registering for a party does within their own state.

No, the DNC didn’t screw (your candidate here).

In the last few diaries, I’ve had more than one instance where people have asked whether or not the DNC screwed over Tulis, Bernie, or any other candidate they favored. The long and the short is this: no. The Democratic National Committee can work to provide a process, but as an organization with less than 750 members, they simply don’t have the votes to stop any candidate in any state, and the party itself has no ability or resources to control polling data, campaign strategy, surrogates, or fundraising.

The Democratic National Committee does, however, maintain control over state Delegate Selection Plans to help ensure that the makeup of attendees to the national convention looks like our voting base. The DNC works to set the primary and caucus schedule, provides data security, and gives access to tools to state organizations. These tools are handled by another organization — the Association of State Democratic Chairs (ASDC).

While ASDC may house its office out of the DNC offices in Washington, D.C., and the head of the ASDC is a vice chair of the national party, the ASDC has its own unique role in handling the growth and support of state parties. From training future staff to helping states provide better resources to their own committees, ASDC divides their workflow into regions (think: South, West, Northeast, etc.) and uses regional staff and resources to help Democratic state organizations improve.

Think of it this way: If the Democratic National Committee is about the details, paperwork, procedures, and fundraising for a national convention, the Association of State Democratic Chairs is about how to take some of the best ideas from other states and share them nationally to become more successful and grow the party.

At later points, I want to cover these within this series, but for the subject of this diary, I really just want to clean up some of the conspiracies promoted around them. While DSCC and the DCCC may work to recruit candidates, they have no power to really make sure they get a “yes.” Lots of candidates say “no” every cycle. They also do not have any power to force someone out of a race. If someone wants to run a primary, these organizations cannot stop them.

Again, the decision to file and run for office is a matter between the candidate and their secretary of state, and the FEC as they turn in required paperwork. There is no means for a party to reject someone from filing.

Too often, this is a theory I see brought up. The DCCC and DSCC are organizations where a lot of the support for them is from buy-in by incumbents. By this measure, you’ll find that they will support incumbents. Still, as some find out, that support does not make other organizations support the incumbent, it has no power to prevent someone from filing against an incumbent, and yes, those incumbents can lose a primary.

More to less or is it less to more?

I want you to imagine this situation. In a presidential race, you have at a top count this year, say, 20 candidates. That’s a lot! And this year, it is more than the number of candidates and efforts that the DGA—the Democratic Governor’s Association—handles, where 11 states are up for grabs. The DSSC deals with a Class-2 election of 33 U.S. senators, plus two special elections in Georgia and Arizona. The DCCC, meanwhile, has 435 seats on hand that it fights for every election (and hopefully will fight for more at some point if D.C. gains statehood). The jump from 33 to 435 is significant, and as a result, you can see how the tasks change. By the time you reach DLCC—the Democratic Legislative Campaign Committee—which involves your elected representatives in state government, the party has thousands of candidates every cycle on the ballot.

And there’s more. The Democratic Municipal Officials (DMO) represents Democrats elected to city councils, school boards, and any other smaller position of local government, and that is a staggering number of positions. Tens of thousands of elected officials exist in this category.

So what does this all mean?

In the end, what this really means is there are organizations that exist to help Democratic candidates get elected. There are outside groups that do as well, like Daily Kos. The one essential element required to make all this work is YOU. Before you fall prey to a conspiracy about the powers of any party unit, keep that element in mind. You, as a voter, are the most important factor in any election.

Trump shocks in time of crisis with his standard approach

Trump shocks in time of crisis with his standard approach