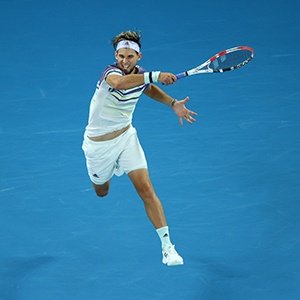 Tennis world No 3 Dominic Thiem on Sunday expressed scepticism about plans to set up a fund to help lower-ranked players struggling because of the shutdown of the sport.

In an interview with Austria’s Krone newspaper, Thiem was asked about last week’s announcement by world No 1 Novak Djokovic that he was working with Roger Federer and Rafael Nadal to organise aid for players struggling with the paralysis of the game due to the coronavirus pandemic.

“Quite honestly I have to say that no tennis player will be fighting to survive, even those who are much lower-ranked,” Thiem said, adding: “None of them are going to starve.”

He said that his experience competing on the sport’s Futures circuit had shown him that there are “many, many players who don’t put the sport above everything else and don’t live in a professional manner.”

“I wouldn’t really see why I should give such players money,” he went on.

“I would rather give money to people or organisations that really need it,” Thiem said.

The plan proposed by Djokovic would involve raising between $3 million and $4.5 million, with the cash coming from the prize money for the season-ending World Tour Finals or the final bonus pools for top players.

“None of us top players got anything handed to us, we all had to fight our way up,” Thiem said.

“I don’t have the guarantee in any job that I will do well and earn lots of money, that’s my opinion on the matter,” he said.