Together At Home concert: 9 things we spotted 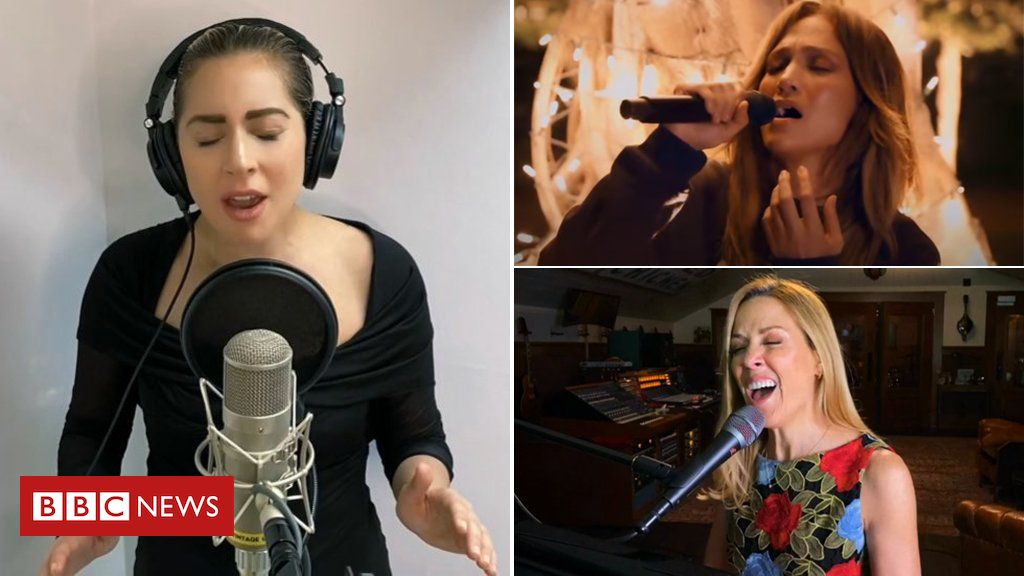 Lady Gaga’s ridiculously star-studded Together At Home concert saw everyone from Paul McCartney to Taylor Swift come together in support of front-line workers during the coronavirus crisis.

The eight-hour broadcast saw more than 100 musicians performing in their living rooms, and broadcast on TV and streaming services around the globe.

Under the circumstances, the quality varied wildly – but there was a voyeuristic thrill to seeing inside the apartments where pop stars are spending the lockdown.

Excerpts of the show will be broadcast on BBC One from 19:15 BST on Sunday, along with UK exclusive performances from the likes of Little Mix, Tom Jones and Rag ‘N’ Bone Man.

Until then, here are some of the highlights, lowlights and other things we spotted during the Living Room Live Aid.

1) Taylor Swift made everyone weepy

Taylor Swift once said she would never play Soon You’ll Get Better live, because the subject matter – her mother’s cancer diagnosis – was too emotionally difficult.

But she powered through it on Sunday night, her eyes clenched firmly shut for most of the performance.

In the context of the coronavirus pandemic, the lines about bargaining with God in hospital waiting rooms carried extra emotional heft, as they summoned thoughts of people suffering from the virus, and the worries of their loved ones.

When Swift’s voice caught on the line, “What am I supposed to do if there’s no you?” more than a few of us choked up with her.

2) The Rolling Stones had drums – but no drum kit

Never in a million years would we suggest that The Rolling Stones were playing to a backing track… but unless Charlie Watts has a magic armchair, there’s no way those drum sounds were coming from his living room.

3) Charlie Puth didn’t even bother to make his bed

What will his mum say when she sees this? (Puth is at his parent’s house, so we half expected her to walk in and yell at him halfway through his performance of See You Again.)

For the most part, though, pop stars made an effort to tidy up – or at least shove all of the unwashed dishes just out of shot.

But we were impressed by Delta Goodrem conspicuously positioning her camera to point at her awards cabinet.

“During hardships like this, we have to lean on each other,” said Stevie Wonder. “My friend, the late Bill Withers, has the perfect song about that, and I want us all to remember him tonight.”

He gave a stunning performance of the soul classic, mixing in elements of his own Love’s In Need Of Love Today. It was a perfectly-judged and moving performance.

Lady Gaga, who was watching at home, summed it up best.

5) Some people had better microphones than others

Sheryl Crow won easily, performing from the professional studio she installed in her backyard barn in Tennessee.

Let’s just look at that room from another angle…

How many guitars does one multi-platinum-selling recording artist need?

But Crow was one of the lucky ones. Other artists were apparently reduced to playing a backing track off CD and singing into their laptop, while The Killers were apparently playing Mr Brightside on a Casio keyboard.

Technical problems were particularly apparent during the pre-show – but even Paul McCartney managed to record his video contribution in portrait mode instead of landscape. Rookie error! (Unless he thought he was going on TikTok instead of a major international simulcast.)

However, organisers Global Citizen said the lack of polish was partially deliberate. Showing stars struggling with the technology helped reinforce the message of solidarity.

“I think right now everyone is understanding that people are (singing) from their homes. We’re not planning to dial up the production, because we want the money to go toward the cause. Because we really believe that’s what matters most.”

What, you expected J Lo to turn up in a smock with her hair tied up in a dishrag? Let’s face it, that was never going to happen.

Lopez stayed true to form, conjuring up all the the glitz and glamour we’ve missed during the lockdown as she performed a syrupy version of Barbara Streisand’s People while bathed in the warm glow of a hundred fairy lights.

7) Christine And The Queens was concerned for our mental health

If the lockdown has you feeling low, you’re not alone.

“It’s really strange,” said pop star Christine And The Queens. “It’s all about screens now and no human contact, and I know it can be draining emotionally. It’s the fourth week here in France and it’s been quite intense.

“I know it’s hard [but] don’t hesitate to reach out to people virtually if you feel down,” she added.

The singer, whose real name is Heloise Letissier, went on to play People, I’ve Been Sad – a vulnerable and intimate song that shared her own struggles with happiness. It was one of the night’s most affecting performances.

Not everyone who took part had a home studio or the ability to play with their regular band, which led to some clever video treatments.

Keith Urban, who is in lockdown with his wife Nicole Kidman, became his own backing band – with three Keiths all playing simultaneously on a cover of Steve Winwood’s Higher Love.

John Legend put together a colourful clip for his single Bigger Love that featured several dancers interacting with one another, despite being in self-isolation (with a glorious twist right at the end).

One member of the K-Pop band SuperM drew an exclusive artwork for fans live during his band’s performance of With You.

And chat show host Jimmy Fallon teamed up with dozens of healthcare workers for a coronavirus-themed cover of Men Without Hats’ Safety Dance.

“We can dance, we can dance, everybody’s washing their hands,” the rewritten lyrics declared.

9) Streaming has changed the nature of benefit shows

“Hi guys, I’m Ellie Goulding and I’m going to play some songs for you,” said (you guessed it) Ellie Goulding. But the singer only got to run through one track before the show cut away to Christine And The Queens.

It turned out that musicians had been asked to record a handful of numbers, with the recordings scattered throughout the eight-hour event. Goulding, nestled amongst some zebra-print cushions, turned up again several hours later to play an acoustic version of Burn.

Presumably organisers they felt that, in the pick-and-mix era of music streaming, people wouldn’t stick around for a full 15-minute, Live Aid-style set from each artist.

But it also lent the show a sense of pace it might have lacked without the multiple camera angles and frenetic editing viewers have come to expect. It could shape the format of benefit concerts for years to come.

The entire extravaganza can be re-watched on streaming platforms right now. In the UK, BBC One will be showing a cut-down of the best bits on Sunday night and you can get full details of that programme here.