Tracking Trump’s Promises on Responding to the Virus 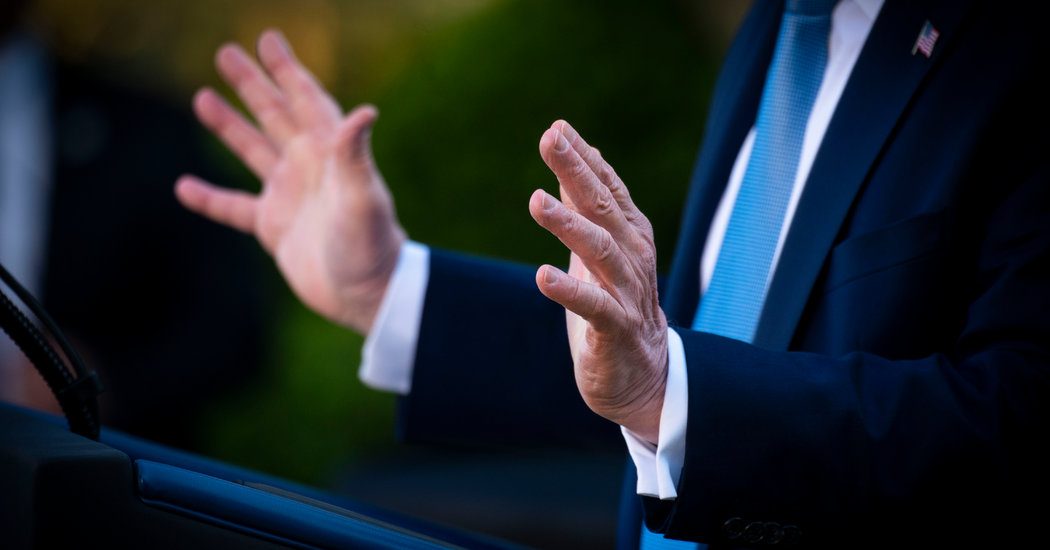 Coronavirus testing will be available in commercial parking lots and can be found through a few clicks on a website. Millions of masks and “more ventilators than we need” will be delivered imminently. Monitoring capabilities for the next phase of the pandemic are on the way.

President Trump has made many promises about responding to the coronavirus crisis. But in the month since he declared a national emergency and as he encourages steps toward reopening the economy, many of them remain unfulfilled or works in progress. The number of testing sites operated by big retail chains is still minimal. It is likely to be months before millions of masks reach hospitals. And his own public health officials warn that a comprehensive surveillance system is not yet ready.

Here’s an assessment of how Mr. Trump’s promises stack up to reality.

For weeks, the Trump administration has pledged to ramp up testing. Progress has been made, but continues to fall short of specific targets outlined by the president.

March 13: “We’ve been in discussions with pharmacies and retailers to make drive-through tests available in the critical locations identified by public health professionals. The goal is for individuals to be able to drive up and be swabbed without having to leave your car.”

Current status: At the March 13 briefing, Mr. Trump thanked the executives of major companies for what he suggested would become a network of drive-through testing locations. A month later, the companies that initially participated in those efforts have opened a combined eight testing locations out of thousands of stores nationwide. Most are also only available to high-risk populations like emergency medical workers, health care workers and seniors.

CVS is operating four sites. Walgreens has one open, with 15 other locations on the way. Walmart opened two but closed one. There’s one testing site at a Target parking lot in California. Rite Aid, which joined the efforts after the news conference, has also opened six testing locations, with additional sites opening soon in other states.

March 13: “Google is helping to develop a website. It’s going to be very quickly done, unlike websites of the past, to determine whether a test is warranted and to facilitate testing at a nearby convenient location.”

Current status: Google’s coronavirus website does not have the features Mr. Trump listed. It is currently informational, with overviews of symptoms and treatments and links to the websites of the World Health Organization, Centers for Disease Control and Prevention, and local health agencies.

Verily, a company affiliated with Google, did develop a website more in line with Mr. Trump’s description. But its screening tool is available only in select locations in California and Pennsylvania, not nationwide.

Health care workers have warned about shortages of essential medical devices. In response, Mr. Trump has invoked the Defense Production Act and signed contracts with manufacturers to meet those needs, but delivery of these supplies may not arrive in time to meet the current demand.

Current status: According to deadlines set in federal government contracts, which were announced this week, General Motors, Philips, Medtronic, General Electric, Vyaire, Hamilton, Zoll, Hill-Rom and ResMed will provide about 68,700 ventilators to the strategic national stockpile before Mr. Trump’s 100-day timeline. The companies will add another 68,800 by the end of the year.

By May 8, a week after Mr. Trump’s target date for reopening the economy, the companies are scheduled to supply about 6,190 ventilators.

Not long after setting the 100-day goal, Mr. Trump seemed to acknowledge that the speed of ventilator production may not keep pace with initial demand.

“A lot of them will be coming at a time when we won’t need them as badly, because it takes time,” he said on April 2.

Current status: Many of these N95 masks won’t be delivered for months. A spokeswoman for the Health and Human Services Department said the agency would purchase about 600 million N95 masks for the national stockpile over the next 18 months.

Honeywell will provide 190 million masks for the stockpile. Production began this week, and the company is starting delivery now, a spokesman said. The estimated completion date for the order, according to its government contract, is September 2021.

Dräger will make almost 50 million masks by the same completion date, according to its contract. Production will begin in September and details are being worked out, a spokesman said.

The manufacturing giant 3M will produce 190 million masks by October 2021. A spokeswoman for the company said that delivery would begin in May.

Moldex-Metric will add 38 million masks to the stockpile by next September 2021, three million of which will be delivered over the next three months, CNN reported. O&M Halyard, which will supply 130 million masks, did not respond to inquiries, but its contract also lists a completion date of September 2021.

Public health officials have said that the next phase of mitigating the virus will require more widespread testing than currently exists as well as the ability to identify where outbreaks are occurring and could occur. These capabilities, however, remain in the works.

Current status: The New York Times was unable to locate publicly accessible guidelines for categorizing counties or a risk assessment that matches Mr. Trump’s description. County-level data does not appear to be available on the website of the Centers for Disease Control and Prevention, the federal agency that has issued status reports on the spread of the virus.

In the proposed guidance for reopening that the White House made public on Thursday, the administration stated that governors could implement plans to reopen their economies on a statewide or county-by-county approach, at their discretion. The plan provided no additional detail.

The C.D.C. does report cases by state and provides a “transmission level” map for countries. In its guidance for travel within the United States, the agency recommends consulting “your destination’s local health department website for more information.”

A letter to hospital administrators by Alex M. Azar II, the secretary of health and human services, and released last week sought data “reported at the facility and county level of detail rather than just a total statewide summary.”

More than a dozen Democrats in the House of Representatives wrote to Mr. Azar and other officials on April 9 asking about those guidelines, and noted that “county-level data are currently not reported by C.D.C. or other federal agencies.” An aide to one of the lawmakers said that they had not heard back.

Asked for an update on the guidelines, the Health and Human Services Department directed inquiries to the White House, which did not respond.

March 27: “Widespread surveillance testing will allow us to monitor the spread of the virus, and we’re doing that quite accurately.”

Current status: The C.D.C. has had trouble establishing a surveillance system that could provide the government with information to guide whether to allow more people back to work and school in different parts of the country. Using a network of health care providers around the country, it began posting weekly updates in April, including the collection and reporting of data on test results, emergency department and outpatient visits, hospitalization rates and deaths. Other key elements to monitor the spread of the virus, however, remain in the works.

For example, blood tests that show exposure to coronavirus through detecting the presence of antibodies are in development. But Dr. Anthony S. Fauci, the director of the National Institute of Allergy and Infectious Diseases, said this week that more research was needed to verify the validity of those tests.

“I know people are anxious to say, ‘Well, we’ll give you a passport that says you’re antibody-positive, you can go to work and you’re protected.’ The worst possibility that would happen is if we’re actually wrong about that” and those people get infected, he told The Associated Press.

Experts have also warned of an insufficient capacity to trace the movement and contacts of people who have tested positive for the virus. The recognition that many people who are infected never show symptoms has presented another challenge.

The Association of State and Territorial Health Officials, a nonprofit organization that represents public health agencies across the country, has estimated that the contact tracing work force among state and local agencies stood at 2,200 — and an additional 100,000 employees are needed.

Dr. Robert Redfield, the director of the C.D.C., told NPR last week that his agency had more than 600 people in the field helping with the effort, “but we are going to have to substantially amplify that.”

Curious about the accuracy of a claim? Email factcheck@nytimes.com.

Lou Dobbs Floats War With China As ‘Consequences’ For Coronavirus