Trump and governors are on a collision course over coronavirus testing 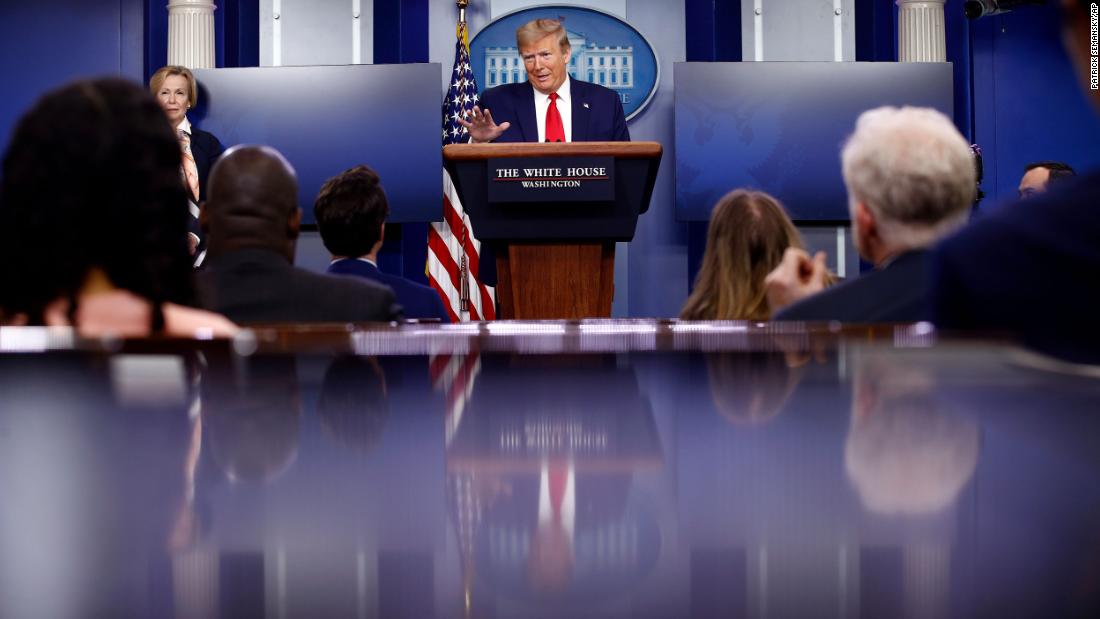 It was yet another week in which the only consistent theme that governors could draw from the White House was inconsistency. And governors on both sides of the aisle are increasingly disputing Trump’s notion that testing should be their responsibility — given that Trump’s hope for an economic reopening will hinge on it.

Many governors say that their budgets are being stretched to the limit by coronavirus-related costs. California Gov. Gavin Newsom and New York Gov. Andrew Cuomo, both Democrats, have asked for federal assistance to expand testing and procure the raw materials needed to conduct the tests.

Leading the White House briefing in a tone of indignation about the lack of praise and gratitude for the administration’s efforts thus far, Trump charged that governors “don’t want to use all of the (testing) capacity that we’ve created. We have tremendous capacity.” A day earlier, the President flatly asserted that governors are “responsible for testing” and said they could be conducting an additional million tests across the nation each week.

But when asked to fact check Trump’s claim about the “excess capacity” for testing, Republican Ohio Gov. Mike DeWine said while that may be true, hospitals in his state are hamstrung by the fact that they do not have enough chemical reagent, the materials needed to conduct the tests.

“It’s a supply chain production problem and that’s really what is holding it back. If they had more reagent, they would be able to expand,” DeWine told CNN’s Erin Burnett on Friday night. He added that Ohio does not have enough of the nasal swabs, tubes and fluid to carry the tests — all critical components in getting them done.

“We are constantly talking to the players in the test community and the lab community about increasing capacity, but some of the work associated with increasing the capacity is going to require the CDC and the FDA to do more,” Baker said Friday during his briefing.

He said he had spoken to numerous federal leaders about the need to increase funding for testing in the next federal stimulus package. “They absolutely, positively need to include in that significant resources for the CDC and the FDA to up their game, because they are a major player in establishing a far more significant testing capacity in the United States,” Baker said.

Republican Maryland Gov. Larry Hogan, who heads the National Governors’ Association, said on NBC on Thursday that the lack of availability in testing has been “the No. 1 stumbling block in America.”

“You really can’t get to any point where you can reopen the country until — not just in my state, but across the country — we can do much much larger-scale testing of more people,” Hogan said.

Cuomo, who noted a decline in New York coronavirus hospitalizations over the past few days, argued during his Saturday briefing that no state can get its people back to work, unless the federal government helps states bring the level of coronavirus testing “up to scale.” That will allow state officials to monitor the rate of infection, identify and isolate new cases, and then use contact tracing to halt the spread of the virus.

Cuomo argued that the Trump administration should help states both with funding for testing, and by asking companies to ramp up the production of nasal swabs, chemical reagent and other equipment needed to conduct the coronavirus tests.

“We have had great success in ramping up testing,” Cuomo said, noting that New York did 500,000 tests in a month. But he said, “It is only a fraction of what you need.”

In California, Newsom noted that his state is still struggling to get enough swabs.

“We need more swabs, we’ve been very direct and pointed in terms of working with our partners at FEMA to try to procure those swabs,” Newsom said Saturday, explaining that the state is still trying to obtain more reagent and RNA extraction kits needed for the tests. “We could be doing exponentially more. … We’ll be looking for all the support we can get private, public federal local, state.”

During Friday night’s briefing, Trump said the administration is sending out 5.5 million testing swabs to the states. The swabs, he said, “can be done easily by the governors themselves. Mostly it’s cotton. It’s not a big deal, you can get cotton easily, but if they can’t get it, we will take care of it.”

Dr. Tom Frieden, former director of the US Centers for Disease Control and Prevention, told CNN’s Sanjay Gupta that the amount of coronavirus testing the United States is currently doing — less than 150,000 tests per day — is not nearly enough and that it is “absolutely the federal government’s responsibility” to help boost test capacity.

“We really need the federal government, commercial laboratories, private sector hospitals to continue to step up,” Frieden said in an interview with Gupta during a taping of his podcast “Coronavirus: Fact vs. Fiction.” “The federal government has a crucial role to play in ensuring the supply chain here and focusing on ramping up test capacity.”

While casting his administration in a supporting role to states for testing, the President has refused to accept responsibility for the early failures at the federal level in sending out faulty tests and being slow to cut red tape that would have allowed private labs to move more quickly. Though the initial test for the coronavirus was created in early 2020 by the Centers for Disease Control and Prevention, Trump returned to the familiar argument Saturday that he inherited “broken junk” from the Obama administration.

From the podium in the White House briefing room on Saturday, Trump categorized the back-and-forth over coronavirus testing as yet another issue that Democrats are politicizing to negatively shape public perception of his administration’s response to the pandemic.

Partisan voices, “are attempting to politicize the issue of testing, which they shouldn’t be doing, because I inherited broken junk, just as they did with ventilators,” he said, referring to his criticism that the Obama administration had not done enough to build up the national stockpile of ventilators.

“We had to take care of the whole country and we did a job the likes of which nobody (had seen) — we assembled an army of young brilliant people,” the President said.

Seeking praise for his administration’s “sweeping response,” Trump noted that complaints about inadequate testing were simply a Democratic talking point, comparing it to the desperate pleas by governors for more ventilators several weeks ago.

“We have done a job that nobody believed. … We marched,” Trump said during the briefing. “Unfortunately, the other side — they’re viewing it as an election. ‘How did President Trump do?’ ‘Oh, he did terribly.'”

Amid falling poll numbers for his handling of the pandemic, the President attacked Democrats earlier Saturday in a three-tweet thread criticizing what he viewed as a overwhelmingly negative response to his administration’s efforts “even in a time of crisis.’

He also complained that Democratic senators were “rude and nasty” in a Friday phone call with Pence that focused on the lack of widespread testing. Sen. Angus King of Maine, an independent who caucuses with Democrats, called the administration’s failure to develop a more widespread national testing regime a “dereliction of duty.”

Following his sharply-criticized tweets Friday urging people to “liberate” the states of Massachusetts, Virginia and Michigan, he lashed out at Democratic governors who he says have gone too far in their social-distancing guidelines.

He singled out Democratic Michigan Gov. Gretchen Whitmer, a possible running mate for former Vice President Joe Biden, and Democratic Virginia Gov. Ralph Northam, who leads a state Trump would like to win in November.

When asked why he was encouraging protests in states over social-distancing guidelines that his own administration has created, Trump said he is seeing “injustices” in some of the states where he believes governors have “gotten carried away.”

He criticized Whitmer, for example, for banning larger stores from selling paint and furniture; and requiring them to close areas of the store that are garden centers and plant nurseries. Her order also barred Michiganders from traveling from their main residence to their vacation home in the state after April 10.

“I’m getting along very nicely with the governor of Michigan, but she has things — don’t buy paint, don’t buy roses — I mean she’s got all these crazy things. I really believe somebody sitting in their boat in a lake should be okay. They shouldn’t arrest people. Some of them are being unreasonable,” he said.

For a second day, Trump accused Northam of taking away Virginians’ Second Amendment rights, even though Northam signed a bill authorizing law enforcement officers to take temporary control of guns if a person is deemed a danger to themselves or others.

“Virginia is a great case though, because they’re using this, they’re trying to take your guns away in Virginia,” Trump said. “If the people in Virginia aren’t careful that’s what’s going to happen to them.”

Tags: politicsTrump and governors are on a collision course over coronavirus testing - CNNPolitics
Previous Post

Coronavirus: Advice columnists give tips on dating, work and parents