Trump blames Chinese lab for virus outbreak, intelligence community refuses to back him up 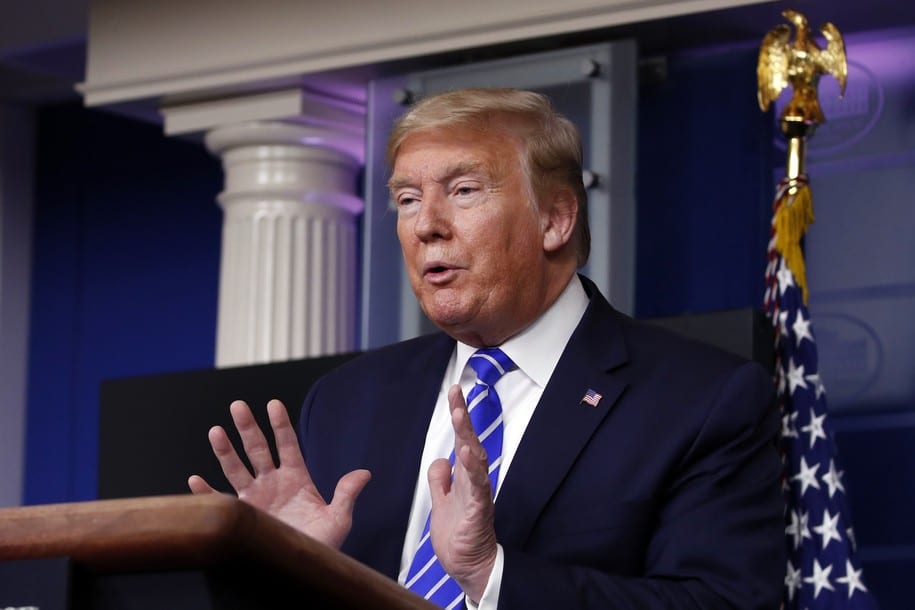 The idea that Donald Trump had discovered a last-minute respect for intelligence sources might be somewhat comforting, if anything he was saying seemed to square with the information that intelligence agencies were actually producing. A statement released on Thursday on behalf of the entire intelligence community makes it clear that the agencies agree with the broad scientific consensus.

“The Intelligence Community also concurs with the wide scientific consensus that the COVID-19 virus was not manmade or genetically modified.”

However, it’s clear that the White House has been pushing these agencies to link the origin of the virus to the Wuhan lab in order to support Trump’s contention that China, rather than his own incompetence, is to blame for the unprecedented disaster and 64,000 deaths in the United States. Directly blaming China for the virus is also part of a larger theme in which Trump’s campaign intends to paint Joe Biden as being connected to the Chinese government.

The statement from the intelligence community leaves open the possibility that the virus may have originated from either “contact with infected animals or if it was the result of an accident at a laboratory in Wuhan.” But absolutely no evidence has been made public that the Wuhan lab is connected to the outbreak.

Attention has focused on the lab from the beginning, as right-wing sources immediately began insisting that the Chinese government was responsible for the outbreak and that a virology lab being sited just blocks away from the suggested source of early cases was just too coincidental. Grants given to the lab to study the virus which causes SARS have also been a factor in right-wing media efforts to claim that the Wuhan lab was connected to members of the Obama administration, as well as Dr. Anthony Fauci.

More recently, most of the attention seems to have focused on a pair of diplomatic cables warning that the Wuhan lab and another nearby had generated concern among visiting researchers. The Washington Post has reported on descriptions of these cables, which have apparently been circulating around the White House as a go-to source of evidence against the Chinese government, but the cables themselves have not yet been made public.

The first of these cables appears directed, not at the lab Trump mentioned, but at another Chinese lab that engaged in a highly questionable 2013 experiment showing that it could create a “chimera” mixing together two viruses. However, it’s very clear that SARS-CoV-2 is not such a chimera, and multiple reviews have found no evidence of any human tinkering.

The second cable centered on the Wuhan lab being the first in China to obtain level 4 biological security standards, and concerns from a visiting U.S. team that the lab lacked sufficient experienced personnel to operate at that high level. That cable apparently requested that the United States provide additional trained scientists and technicians for the lab, a request that apparently went unanswered.

The entire idea that there was an “accident” at the lab, at least as far as anything available to the public, seems to be based on a section of this two-year-old cable which the Post describes as saying “During interactions with scientists at the WIV laboratory, they noted the new lab has a serious shortage of appropriately trained technicians and investigators needed to safely operate this high-containment laboratory.” Since the lab has just reached BSL-4 standards, that seems understandable. Also worth noting is that the visiting American team was allowed to interact with the scientists at the lab. China invited multiple international teams, including teams of U.S. scientists, to visit and inspect procedures at the lab. These included visits at least as late as 2018. Which certainly suggests that the Chinese government wasn’t too concerned about the researchers in Wuhan talking to American colleagues or visiting scientists spotting anything overtly nefarious.

There had been a lab on the location since the 1950s explicitly because the region was a frequent site for emerging diseases. Placing the lab there gave researchers proximity to both a location where zoonotic diseases were popping up with regularity, but the animals who represented the original source of viruses. It was, in fact, the same lab that identified the source of the SARS virus as coming from a local population of bats.

Everything that’s been seen so far is just this: the Chinese government stepped up security at one of their labs, and invited US scientists to tour the facility, U.S. scientists recommended sending them assistance to meet the new security level, the White House ignored that request. It may be that the contents of the cables mention specific threats, or have details that point to something specific about this virus. If so, none of that has been released. And it’s not as if there’s any obvious concern in this case over diplomatic sources—the Chinese know the delegation was there. They invited them.

Could the SARS-CoV-2 outbreak originated with an accident at the Wuhan Institute of Virology? It’s certainly possible. However, as the intelligence community statement communicated on Thursday, so is the idea that the virus made the leap to humans through contact with infected animals. That path—the animal to human path—is one that we know diseases have followed many, many, many times. It’s not clear that any epidemic has ever resulted from a laboratory accident. One of these possibilities is a common occurrence that has been repeated thousands of times through human history. The other would be a first. This would suggest that the burden of proof weighs more heavily on those pointing fingers at the lab.

It’s clear that SARS-CoV-2 has a zoonotic origin. It’s also clear that it infects such a broad range of mammals that it can infect people, house cats, tigers, and dogs. This suggests that there was no need for mediation by some exotic and rare animal. No one in Wuhan needed to be chowing down on bat-ca-bobs, or picking over pangolins. It appears that this virus can make a home in many different mammals, and is capable of frequent interspecies hops.

And there’s another issue. The Wuhan lab isn’t just a research facility, it’s a research facility that frequently publishes its work, including information on viruses being studied, their sources, and genetic sequences. SARS-CoV-2 is not among the viruses covered by any of these publications. So if the virus did enter the local population through an accident at that lab, it apparently did so without leaving any kind of paper trail.

If there was any evidence of human tampering in the virus, there would certainly be a good reason to point toward these labs. There’s not. The virus certainly could have entered the human population in Wuhan through an accidental release from one of several labs. But the available evidence of that accident isn’t just slim, it’s nonexistent.

And one other thing … since when has Donald Trump said “I’m not allowed to tell you” about anything? This is, after all, the guy who has spilled more classified information than a dozen spy movies. The guy who chatted up the Soviet ambassador with classified intelligence in front of cameras in the Oval Office. Who tells him what he’s “allowed” to do? Is Trump staying quite because he’s concerned about an intelligence asset, or is he waiting for someone to write his next line?

Honestly, at this point Trump has replaced so much of the intelligence community that it’s amazing they didn’t issue a statement claiming the virus was cooked up by Hunter Biden and George Soros on Bill Gate’s stove, with the help of that evil Asian scientist from Jurassic Park. The fact that the intelligence community will not back Trump on this, is the best sign that there isn’t any real evidence behind this claim.

Here's what Dr. Fauci is concerned about as states reopen

Here's what Dr. Fauci is concerned about as states reopen