Trump parrots fake tv doctors, says Americans need to go to work or people will do drugs and die 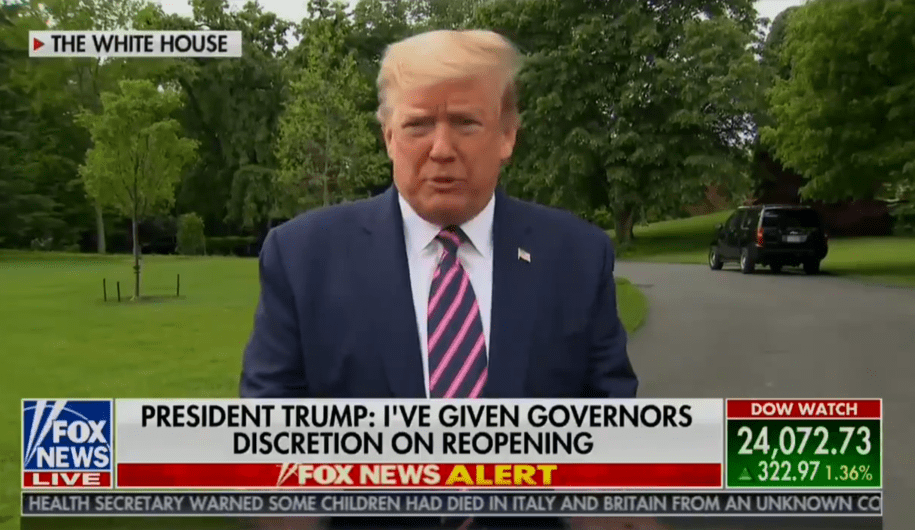 TRUMP: No, no I’m not, because that assumes no mitigation. And we’re gonna have mitigation. The fact that we’re letting people go and go to their jobs—they have to do it. You know, if they held people any longer with the shutdowns, you’re gonna lose people that way too. And you already have I’m sure. But between drug abuse, and I mean, they say, suicide—a lot of different things. There’s no win. There’s no great win one way or the other.

Trump then went on to lie that he built the “greatest economy in the world” and that “everybody agrees.” Now, Trump is a dumb, narcissistic, corrupt, and dangerously powerful man. But as dumb as he is, he does know how to watch television and parrot what he sees there. And what he has been watching is Fox News and other conservative media outlets as they spin and create propaganda for his criminally incompetent administration. When something sounds good to Trump, he regurgitates it back to reporters, and then in turn Fox News runs with it.

This tactic by Trump and conservatives to spin their catastrophic handling of the pandemic and the ongoing systemic failures of our country’s economic system to manage a predictable disaster is not new. Amorphously talking about the very real issues of mental health and addiction in our society in order to distract from a complete lack of willingness to create laws and spend money on infrastructure to deal with public health and safety issues is a well-worn tactic of people like the NRA. The trick is that it speaks to something that touches everyone in some shape or form.

If it ever led to a single dollar being spent or law being created that might help soothe Americans’ troubled minds, we have not seen it. Republicans and conservatives bring people out to diagnose the concept of mental illness and addiction, then, after the anger and fury has passed, they do nothing. Not unlike Republican leaders saying that old people should sacrifice their lives so we can get back to work at minimum wage jobs, Trump and others believe those with addiction issues and other mental health issues are the weak, and cannon fodder for their economic war on the 99%.

REPORTER: Are you concerned that deaths are projected to rise b/c states are relaxing guidelines too early?

TRUMP: No … the fact that we’re letting people go & go to their jobs — they have to do it … between drug abuse, suicide — there’s no great win one way or the other pic.twitter.com/dPO92VNNvY