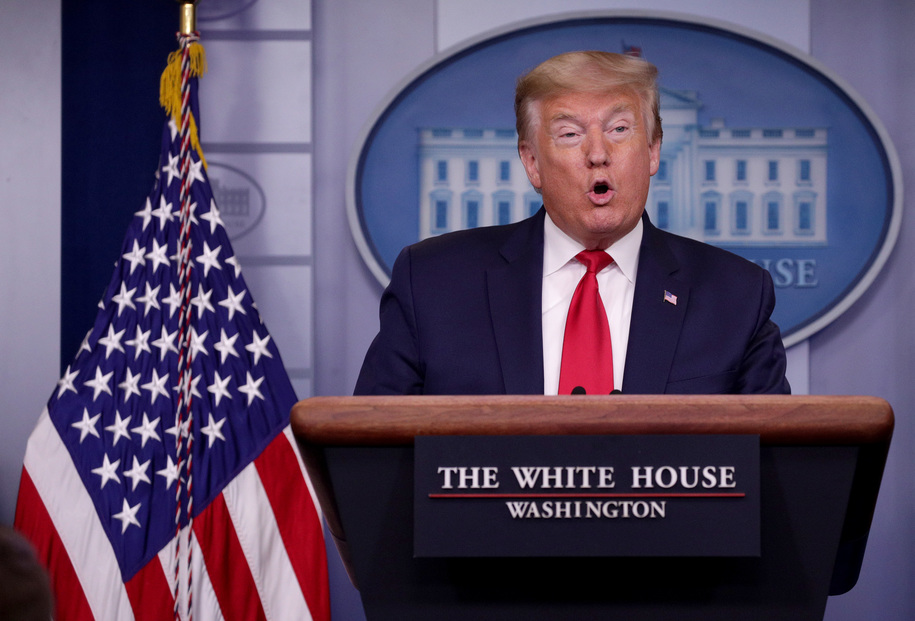 Of course, Trump has already sent the U.S. intelligence community on a hunt to find out whether China initially hid information about an emerging outbreak. And last week, Trump told reporters he had seen evidence the coronavirus originated at a lab in Wuhan, China, though Trump immediately declined to detail any of that evidence. But whatever evidence Trump has fantasized seeing, it didn’t come from U.S. intelligence services.

The Office of the Director of National Intelligence issued a clarifying statement following Trump’s fabrication noting it agreed with scientific consensus that the virus was neither manmade nor genetically modified. But the statement left open the possibility that the outbreak was the result of an “accident,” saying it was continuing to investigate the matter. The scientific consensus continues to be that the coronavirus most likely spread through an accidental transmission from animals to humans.

Deprived of the conspiracy theory that China intentionally made the  virus, Trump embraced a position that was more in line with the statement from his own intelligence community.

“My opinion is they made a mistake. They tried to cover it, they tried to put it out. It’s like a fire,” Trump said Sunday. “You know, it’s really like trying to put out a fire. They couldn’t put out the fire.”

Also on Sunday, Secretary of State Mike Pompeo continued his series of cringeworthy TV appearances in support of whatever new snake oil Trump is selling. On ABC’s This Week, Pompeo said “the best experts so far” seem to think the coronavirus was manmade. After journalist Martha Raddatz clarified that U.S. intelligence officials have disavowed that theory, Pompeo turned on a dime instantly, saying he instead concurred the intelligence assessment the virus was not manmade—thereby completely contradicting what he had said just seconds earlier.

Raddatz: “Your office of the DNI says the scientific consensus was not manmade or genetically modified.”

Pompeo: “That’s right, I agree with that.”

Oh. When Raddatz asked him to clarify which of his two selves was correct, Pompeo dodged, simply getting back to what mattered—blaming China.

“Here’s what’s important—the Chinese Communist Party had the opportunity to prevent all the calamity that has befallen the world,” Pompeo said.

So after Trump spent late 2019 and early 2020 assuring Americans that China was doing a good job with the outbreak and had everything very well handled, suddenly China is the super villain. And apparently Trump had absolutely no agency in helping to prevent the calamity that has befallen the U.S. while he was piddling around praising China’s initial handling of the burgeoning epidemic—even as his own intelligence officials warned him repeatedly about the impending crisis.

Trump officials may as well be jingling a set of keys in front of America while pointing at China. In fact, a report is obviously forthcoming and no matter what it actually concludes, Trump and his minions will be laying the entirety of the blame at China’s doorstep. You can count on that.

RADDATZ: Do you believe coronavirus was man-made?

POMPEO: The best experts seem to think so

R: But the DNI says the consensus is it wasn’t

P: That’s right. I agree with that