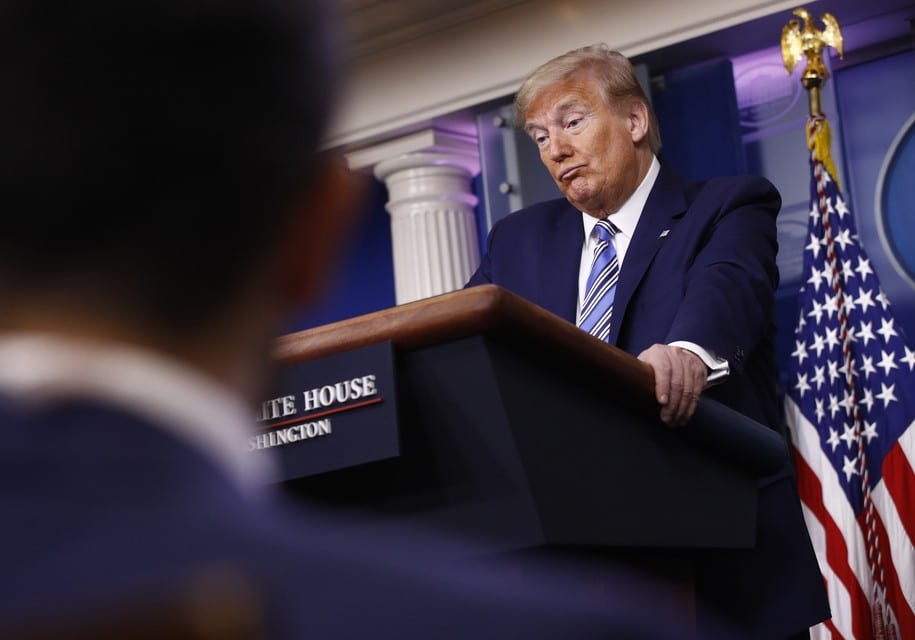 Trump responded to a reporter’s question about the report prepared by Grimm during an April 6 press conference. Asked about the report’s conclusion that there were shortages of critical materials at 300 major hospitals across the country, what followed was a remarkably telling exchange.

Reporter: “But this is your own government.”

Reporter:  “It came from the inspector general report—“

Reporter: “I don’t know his name off of the top of my head.”

First, Trump assumed the inspector general was male. Because of course he did. Second, it’s clear that just the phrase “inspector general” is triggering for Trump. That’s not just because of the whistleblower report. Trump has conducted a general purge of inspector generals for years. These are people who check your numbers and report when you’re lying. And Trump cannot tolerate that.

But Trump demanding that reporters get him the name of the inspector general speaks to another of Trump’s defining features. In addition to being a constant liar and braggart, he’s also extremely lazy.

As The New York Times reports, when Trump learned the Grimm had severed in her role for years, he immediately called her an Obama supporter and declared the report was politically biased. In fact, Grimm has worked in her department since 1998, and was not a political appointee. Of course, none of that matters. All that matters is that Trump found an excuse to dismiss the findings.

Which is a tweet that may have made a little more sense on April 8 … although that did happen to be the exact day on which the COVID-19 outbreak in the United States exceeded the entire number of deaths through the whole 2008-2009 flu season.

In any case, after a year in which Trump saw no reason to pick an inspector general for HHS, he’s suddenly been inspired to fill the role. Because he belatedly realized that leaving a gap there only meant that a dedicated public servant with decades of experience was actually doing that work.

To fill the slot, Trump has named attorney Jason Weida who has a relationship with HHS. In that he defended the agency in a lawsuit against new rules put in under Trump. Specifically, Weida defended the new rules allowing employers to block funding for contraceptives. So Trump is replacing someone who wrote a report accurately reporting healthcare shortages, with an attorney who justified denying healthcare.

Exactly what America needs in this crisis.