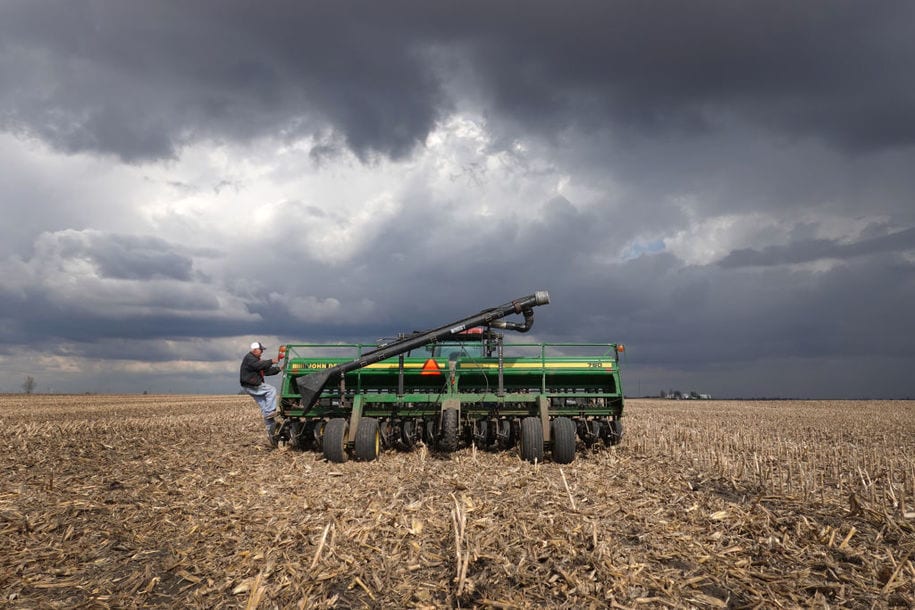 With the near-total shuttering of restaurants due to social distancing orders now in place in nearly every state (as urged by the administration itself in response to the COVID-19 pandemic), an enormous glut of food previously intended for restaurants and caterers—and the wholesalers that supply them—appeared almost immediately. In March, Bottemiller Evitch writes, as the crisis became almost immediately apparent, farmers, produce groups, congressional representatives, and state legislators from agricultural districts contacted the Department of Agriculture headed by the Trump-appointed George Ervin “Sonny” Perdue, asking him to use his agency’s authority to coordinate an effort to involve farmers in the distribution of this unneeded surplus.

“There is no reason these high-quality, nutritious, farmer-grown products should be left in facilities to rot when there are so many American families who are suddenly faced with food insecurity,” the groups wrote to Perdue. “These growers and companies are already donating to food banks and others in need and will continue … but they are also facing their own economic crises.”

Their request was ignored for almost a month. In fact, there still has been no official response by Perdue to this request in the midst of the most acute demand for food facing this country since the Great Depression.

Meanwhile, lines of cars literally extending for miles began forming at food banks across the country as demand for food distributions rose by 70%, fueled by a sudden increase in Americans trying to cope with massive job losses. Late last week, Perdue’s USDA finally announced a program to buy up some surplus food, but it will take upwards of another month to get that food to the food banks and pantries that needed it weeks ago. By now most of the produce that had been wasting away in fields or in packed silos for a month has completely rotted. It’s almost as if no one at the USDA had ever bought vegetables at the grocery store. Hint: They don’t last a month.

According to the Politico article, about 40% of the nation’s fresh produce is dedicated to the food service industry. In other words, had the USDA bothered to act promptly as this crisis swept through that industry, 40% of our entire agricultural production would have been available, at least in theory, to supply these food banks that are now being overwhelmed. Individual states such as New York and California initiated some attempts to distribute this surplus food, but simply did not have the resources to do it. A federal response was imperative, and of course, it has failed.

Farm owners interviewed by Evitch for the article are furious with the USDA because when it finally did choose to act, it imposed a strict payment cap per specific commodity that grossly undercut the farmers’ own costs in producing many of these crops. So the system now being set up too late by USDA not only wasted millions of pounds of produce; in most cases it doesn’t come close to compensating farmers for their own outlays, disincentivizing them to keep growing and shipping the food to food banks.

As Bottemiller Evitch summarizes, the amount of food now being wasted is mind-boggling.

The scale of produce waste is staggering. Farmers in Florida, which provides much of the fresh produce to the eastern half of the U.S. during the winter and spring, left about 75 percent of the lettuce crop unharvested, along with significant portions of the state’s sweet corn, cabbage and squash. Up to 250 million pounds of tomatoes could end up left in the fields, according to the Florida Department of Agriculture & Consumer Services. Florida officials estimate produce growers there have taken a half a billion dollar hit. In California, the industry is projected to lose more than $1 billion per month.

As for the hungry Americans lined up to receive the meager provisions made available, they—as well as the food banks themselves—will see little if any of the food surplus now being wasted for at least another month, and probably much longer. The USDA’s newest “plan” is to spend $100 million on produce and $100 million on cooked meat and dairy products to create “variety boxes” for America’s food-insecure population of 54 million (including 18 million children), the number of Americans projected by Feeding America likely to be lacking the means to pay for food due to the pandemic. Needless to say, the amount announced by USDA doesn’t even come close to what will be necessary to keep these Americans from going hungry.

And, as typical of this administration’s federal response  to the pandemic, none of the logistics on how to actually get these packages to needy Americans have been worked out. Politico interviewed Tony DiMare, a produce grower in Florida, who called the plan “a joke” and listed several of the logistical problems with creating such “variety boxes.”

It’s not clear how many companies are set up to pack mixed varieties of produce into boxes. What happens to highly specialized growers? If a business only grows tomatoes, will it have to go find other vegetables for the box, or will everyone sell to a third party?

If the administration’s nonresponse to the public health consequences of the COVID-19 pandemic is any indicator, any plan hatched by Trump’s federal agencies like USDA is already predestined to fail. By now there is simply the lack of brainpower and will at these federal agencies, all of which, including USDA, have been hollowed out and replaced by Trump loyalists with no managerial experience and little regard for the agencies they are heading. The fact that Sonny Perdue’s USDA took over a month to respond to a crisis that his own agency should clearly have foreseen and prepared for is the best evidence of that.

It’s also notable that practically every official statement—including tweets supposedly from Perdue himself—by the Department of Agriculture includes effusive, apparently mandatory praise of Donald Trump’s leadership. Perdue’s response to the Politico article is typical: “This is a challenging time for many Americans, but it is reassuring to see President Trump and our fellow Americans stepping up to the challenges facing us to make sure kids and those facing hunger are fed.”

In the meantime, the produce continues to rot, the milk continues to be dumped, and tens of thousands of Americans are being turned away by food banks that cannot possibly cope with this crisis without assistance and leadership from a competent federal government.

Feeding America is the largest organization of food banks in the country.

Coronavirus: World must ‘pull together’ to find and fund vaccine