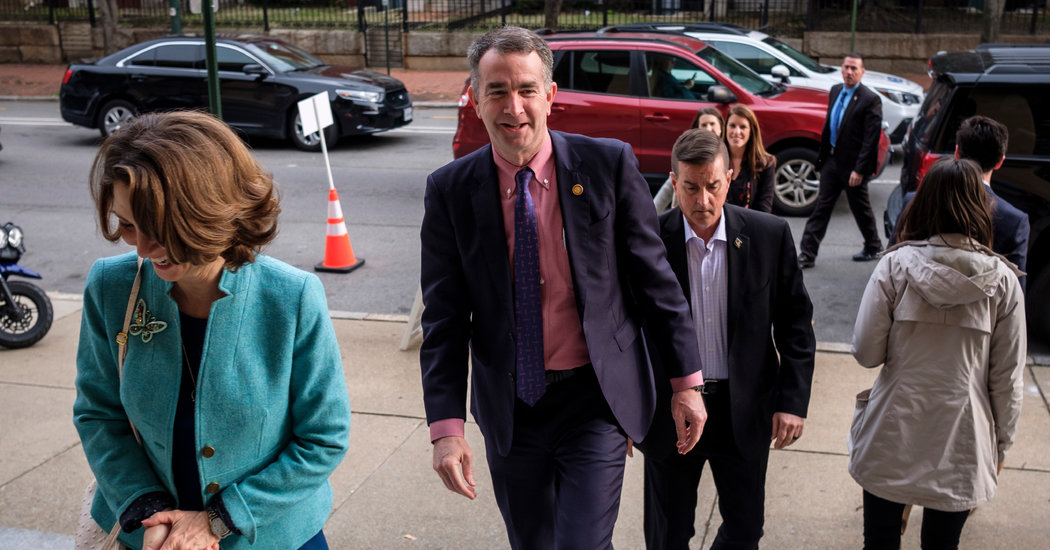 The leftward transformation of Virginia since President Trump was elected crescendoed over the weekend, with the governor signing into law protections for L.G.B.T. residents, gun background checks, no jail time for simple marijuana possession and early voting.

The flurry of new measures enacted by Gov. Ralph S. Northam, a Democrat, came five months after members of his party took control of the Legislature back from Republicans for the first time in more than 20 years. Mr. Northam had been facing a deadline of midnight Saturday for signing bills into law.

In Virginia, Democrats have developed a political advantage in the heavily populated northern suburbs of Washington, where Hispanic and Asian voters make up a growing part of the electorate, as well as in places with a significant African-American population like Norfolk.

Democrats have used that upper hand to remake a state that was once the seat of the Confederacy and known as a conservative bastion, one that the political scientist V.O. Key Jr. described as “political museum piece.” He wrote that, by comparison to Virginia, Mississippi was “a hotbed of democracy.”

“It’s a gigantic change,” Larry Sabato, the director of the University of Virginia’s Center for Politics, said in an interview on Monday. “There really is no precedent. There is no period like this. Virginia has never had a liberal period.”

The chain of events began on Friday, when Mr. Northam said he had signed a series of gun control measures into law that includes a background check requirement for all firearm sales and a so-called red flag law that supporters said would give law enforcement officers a mechanism to confiscate the weapons of people deemed a danger to themselves or others.

The measures drew acclaim from groups such as Everytown for Gun Safety, the advocacy organization financed and created by the former Mayor Michael R. Bloomberg of New York City. They go into effect on July 1.

At the same time, the new restrictions were decried by Second Amendment advocates and conservatives, who said they trampled on the constitutional rights of gun owners and vowed to challenge them. Among the law’s critics was Gayle Trotter, a conservative lawyer and Fox News contributor.

“Hey Virginia, your governor characterized the day he signed away your rights as law abiding citizens as ‘This is an exciting day for me,’” Ms. Trotter wrote on Twitter. “It is hard to win back liberty once it is lost, but this is not over yet.”

The Republican Party of Virginia did not immediately respond to a request for comment on Monday night.

Barbara A. Perry, the presidential studies director at the University of Virginia’s Miller Center, said in an interview on Monday that Mr. Trump’s election was a catalyst for change in the state.

“This is what people pointed to when Trump came into the office,” she said. “This is the progressive direction that the Commonwealth of Virginia is taking not only with this governor, but a solidly Democratic Legislature.”

On Saturday, Mr. Northam announced that Virginia had become the first state in the South to include language in its anti-discrimination housing and employment laws that protects people on the basis of their sexual orientation. The law, known as a the Virginia Values Act, goes into effect on July 1.

“This legislation sends a strong, clear message — Virginia is a place where all people are welcome to live, work, visit, and raise a family,” Mr. Northam said in a statement. “We are building an inclusive Commonwealth where there is opportunity for everyone, and everyone is treated fairly. No longer will LGBTQ Virginians have to fear being fired, evicted, or denied service in public places because of who they are.”

Also on Saturday, Mr. Northam signed a law that his office said repealed racist and discriminatory language from Virginia’s Acts of Assembly and gave cities and towns the ability to remove or alter Confederate monuments in their communities. The measure also set into motion the replacement of Virginia’s statue of the Confederate general Robert E. Lee in the U.S. Capitol.

Next, Mr. Northam announced on Easter that he had signed a series of changes to the state’s criminal justice laws that included decriminalizing the simple possession of marijuana, a measure that takes effect on July 1. Mr. Northam proposed a $25 civil penalty for simple marijuana possession, sealing conviction records and prohibiting employers from asking about a past conviction, which still require legislative approval.

Under current state law, a first-time offender faces up to 30 days in jail and a $500 fine for possession of less than a half-ounce of marijuana, which will no longer be a misdemeanor.

On Sunday, Mr. Northam announced that he had also signed a law allowing Virginia residents to vote up to 45 days before an election without a stated excuse. To get an absentee ballot under the current system, voters had to have a legitimate reason that included being out of state on business or at school or having an illness.

The local conservative talk radio host John Reid bemoaned the changes to Virginia’s voting laws on his program on Monday, saying it “seems to me to set us up for a lot of fraud.”

Donald Trump Wants To Fight Coronavirus As A ‘Wartime President.’ He Can’t.

Donald Trump Wants To Fight Coronavirus As A ‘Wartime President.’ He Can’t.