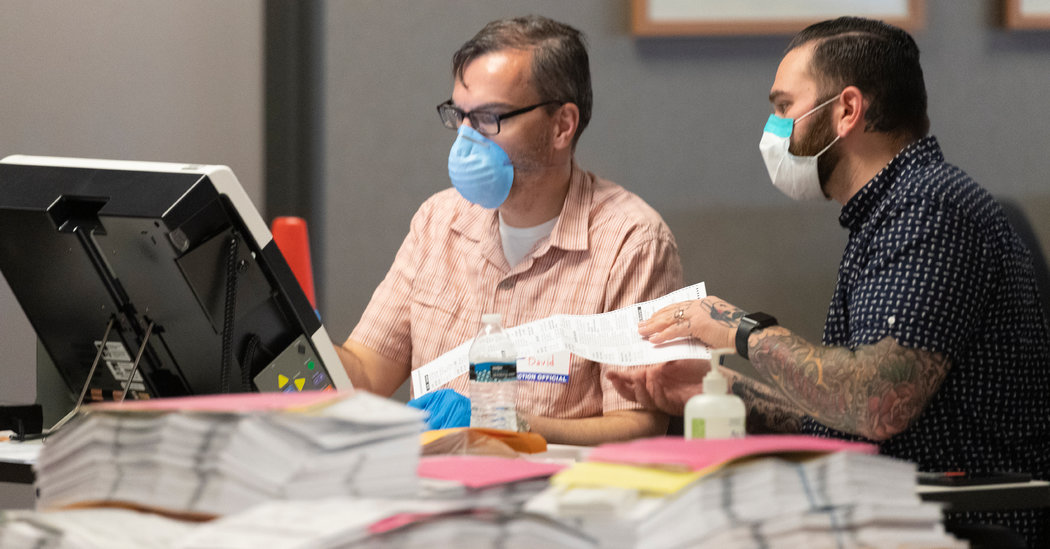 The liberal candidate in Wisconsin’s hard-fought State Supreme Court race this month prevailed in voting by mail by a significant margin, upending years of study showing little advantage to either party when a state transitions from in-person to mail voting.

The gap suggests that Democrats were more organized and proactive in their vote-by-mail efforts in an election conducted under extraordinary circumstances, with voters forced to weigh the health risks of voting in person against the sometimes unreliable option of requesting and mailing in their ballots. Still, it is likely to add to the skepticism President Trump and Republicans have expressed about mail voting, which they worry would increase Democratic turnout at Republicans’ expense.

The liberal jurist, Jill Karofsky, performed 10 percentage points better than her conservative opponent in votes cast by mail than she did in votes cast at Election Day polling places, a gap that powered a surprising 11-point victory over all in a state both parties view as crucial to winning November’s presidential election.

The voting data, collected by The New York Times from 27 Wisconsin municipalities that segregate ballots cast on Election Day from those sent by mail, shows that Judge Karofsky’s advantage in mail ballots over the conservative incumbent, Justice Daniel Kelly, was consistent across communities of varying size, geography and partisan lean. In a state with little history of voting by mail, more than 1.1 million of 1.55 million votes cast came by mail.

The Times analysis of Wisconsin records shows a staggering gap between in-person and mail voting in some communities. At a single precinct, Beloit’s 11th Ward, Justice Kelly won 64 percent of the Election Day vote while Judge Karofsky took 70 percent of votes cast by mail.

Barry Burden, a professor of political science at the University of Wisconsin-Madison who is among the academics who have produced studies that found no partisan advantage to mail voting, said the Times analysis of the Wisconsin data did not align with any previous studies from states such as Colorado and Utah, which transitioned to fully vote-by-mail systems in recent years.

“I’m surprised by the results,” Mr. Burden said when told of the gap between in-person and mail results. “It is convincing and surprising that Karofsky appears to have done better among mail voters than in-person voters. That’s a change from past trends. It’s unclear if that’s going to be a permanent change or something very specific to this particular election.”

Judge Karofsky performed better in the mail voting in every Wisconsin community in which results were made available to The Times. In Milwaukee, the state’s largest city, her performance among mail ballots was 5.8 points better than it was on Election Day, when voters waited in line for hours to vote at the five polling places that remained open.

Even in the Republican heartland of Waukesha County, Judge Karofsky performed far better among mail voters than she did on Election Day. In New Berlin, she won just 33 percent of votes at polling sites, but 43 percent in the mail, where four in five of the city’s votes were cast. In the City of Pewaukee, she took 27 percent of the Election Day vote and 37 percent of the mail ballots.

The pattern helped Judge Karofsky carry swing communities that are crucial to winning statewide races in Wisconsin. In Neenah, in the Fox Valley south of Green Bay, Justice Kelly won the Election Day vote, 53 percent to 47 percent. But Judge Karofsky took 60 percent of the mail ballots. She won the citywide vote, 58 percent to 42 percent.

None of the academic studies cited as evidence that there was no partisan advantage to mail voting had been able to segregate mail voting results from in-person ones for a single election.

Such results are available from Wisconsin’s April 7 election because 32 of the state’s municipalities, including Milwaukee, count absentee ballots at a central location using separate tabulating equipment. The state’s other 1,800 cities, villages and towns do not segregate absentee ballots from those cast on Election Day when counting them, according to Reid Magney, a spokesman for the Wisconsin Elections Commission.

Robert Stein, a political scientist at Rice University who has helped put in place vote-by-mail systems across the country, said the Wisconsin results showed the ability of Democrats there to build a statewide vote-by-mail system essentially from scratch just weeks before the election.

“You probably had much more core frequent and Democratic voters voting by mail and late-deciding voters waiting to vote at the polls,” he said. “The Democrats proved they can mobilize their voters to vote by mail.”

“The people who used it were older voters who voted more Republican,” Ms. Showalter said. “As you get more widespread adoption, you get into more of those low-propensity voters. It might advantage Democrats.”

Ben Wikler, the chairman of the Democratic Party of Wisconsin, attributed Judge Karofsky’s success in mail voting to the party’s mid-March decision to focus entirely on educating Democrats about how to request and complete a mail ballot.

“The Democratic Party decided weeks out from the election to switch 100 percent of its efforts to vote-by-mail in the first time in its history,” Mr. Wikler said. “I think Republicans bought some of their own disinformation.”

Wisconsin Republicans acknowledged that the state’s Democrats became far more invested in encouraging their voters to request and return absentee ballots before this month’s election.

“They were invested in doing this starting as early as the first week in March,” said Robin Vos, the Republican speaker of the Wisconsin State Assembly who, on Election Day, was photographed in full personal protective equipment during his stint as a poll monitor in his hometown, Burlington. “I would say that, stereotyping, Republicans like to go vote on Election Day.”

Mr. Vos said the Wisconsin election was evidence that no changes in the state’s voting laws and procedures are necessary before the November general election, when twice as many people are expected to vote. Democratic requests to mail ballots to all registered voters and to remove requirements that voters upload a photo identification to request an absentee ballot and obtain a witness signature before returning ballots are out of the question, Mr. Vos said.

“The only reason they would want to expand voting would be to create an opportunity for potential fraud or because they want to give themselves some kind of partisan advantage,” Mr. Vos said. “The current situation is pretty fair to everybody.”

“The daily hubbub in Washington, that stuff doesn’t necessarily break through with our voters,” said Brian Reisinger, who served as a senior aide to former Gov. Scott Walker and Senator Ron Johnson.

Yet there was some acknowledgment that the G.O.P.’s political apparatus in Wisconsin, which built a powerful get-out-the-vote machine that elected Mr. Walker three times and gave Mr. Trump a shocking 2016 victory, was slow to adapt to a rapidly changing public health situation.

“The right is more rigid,” said Matt Batzel, the Cedar Grove, Wis.-based national executive director of American Majority Action, a conservative grass-roots training organization. “People on the right need to use the rules of the game and use all the voting opportunities that are available.”

Stanley Tucci Makes A Negroni And The Internet Thirsts For Him