Weekend weather: Tornadoes are forecast for the second weekend in a row across the South 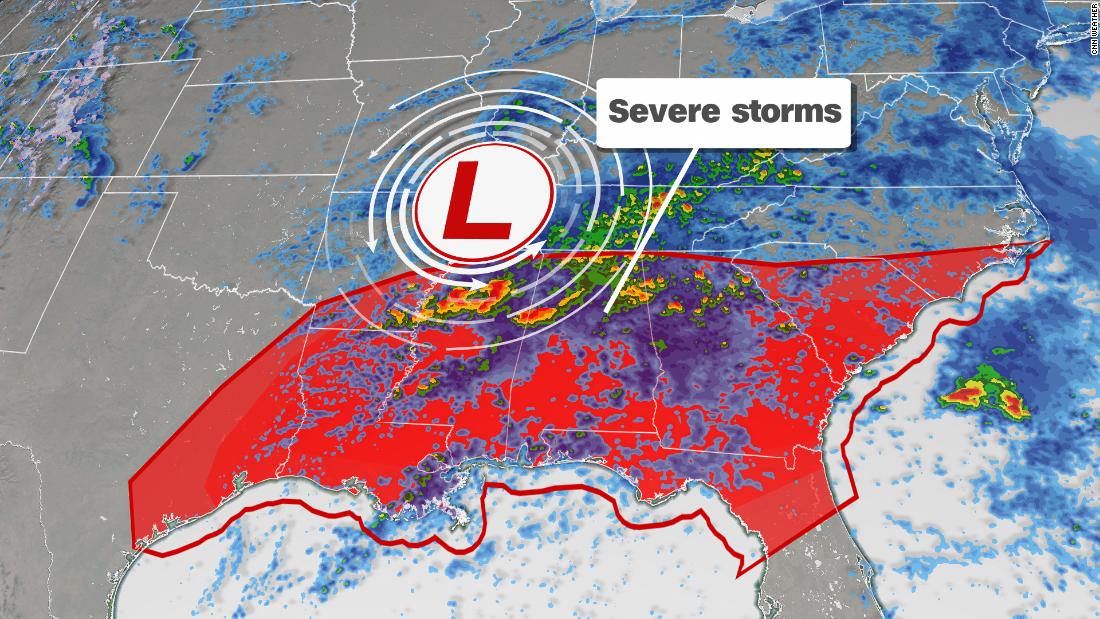 Southern states from Texas to the Carolinas are at risk for more tornadoes this weekend.

“It will probably feel a bit like deja vu to residents in the Southeast, with another enhanced threat for severe weather this Sunday,” said CNN meteorologist Brandon Miller.

The region will start to see thunderstorms forming on Saturday afternoon. The main threat will be hail, with a low chance for tornadoes.

“A few strong to severe storms are possible on Saturday, much like last weekend over Texas and Arkansas,” said CNN meteorologist Dave Hennen. “But the main event will take place on Sunday.”

Storms are likely to begin early Sunday morning in Mississippi and Alabama. Initially, the main risk will be hail. But the storms are expected to grow more severe through the day.

Track the storms this weekend here >>>

By afternoon, the primary system will push out of Texas and through the Southeast. States hid hard by last week’s storms are particularly vulnerable, said Miller. They include Mississippi, Alabama and Georgia.

Places like Southern Mississippi — which saw two long-track tornadoes, 68 miles and 82.5 miles long — will once again be in the path of the storms.

Residents should expect hail the size of tennis balls, damaging winds up to 70 mph, and tornadoes to continue through the evening and into Monday morning.

“While unusual to see nearly identical-looking threats exactly one week apart, this is the peak time of year for severe weather and tornadoes across the southern US, especially in the area called ‘Dixie Alley,’ ” Miller said.

The area, like “Tornado Alley” in the Plains, historically produces tornadoes as the seasons change. Dixie Alley is more dangerous because of population density and many of these storms producing nighttime tornadoes.

4 tornado safety tips that could save your life >>>

This is why it’s essential to have a way to receive alerts about tornadoes in your area, even while sleeping.

The storms are also expected to bring heavy rain and possible flooding.

“There has been an increasing signal for a widespread heavy rain event,” the Weather Prediction Center (WPC) said Friday.

An estimated 3 to 6 inches could fall from the Lower Mississippi Delta to portions of the Southern Appalachians, with even higher amounts in some areas.

With back-to-back weekends of rain, flash flooding is possible in areas — like the Tennessee River Valley — that are already saturated.

“The past seven days have been 400 to 600+ percent of normal in the Tennessee Valley,” said the WPC.

Over parts of Mississippi and Louisiana, excessive rainfall is likely, the WPC said, along with rapid runoff, urban ponding and

Tags: weatherWeekend weather: Tornadoes are forecast for the second weekend in a row across the South - CNN
Previous Post

Trump vs. the Postal Service