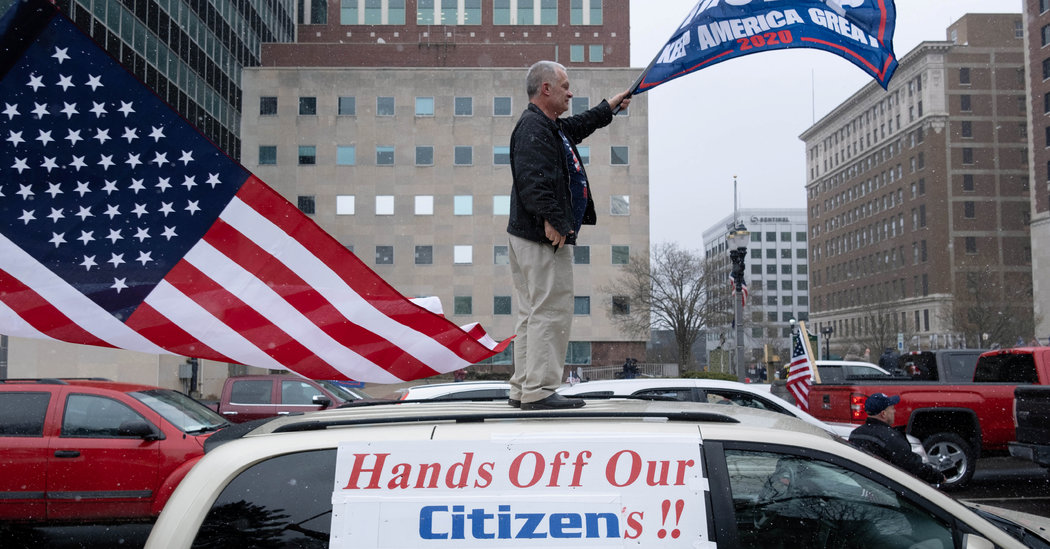 On Fox News, Tucker Carlson has called Gov. Gretchen Whitmer of Michigan “authoritarian” for placing strict limits on public activity in response to the virus, which has hit the state hard. When Garrett Soldano, a right-wing activist, spoke recently via live stream to his Facebook group, Michiganders Against Excessive Quarantine, he focused more on principles of liberty than on economics. “Keeping healthy people at home is tyranny,” he said.

On the Facebook page of the conservative group Convention of States, which has close to two million “likes,” a statement posted on Thursday read: “Heavy-handed government orders that interfere with our most basic liberties are CERTAIN to do more harm than good.”

In 2010, when the Tea Party movement reached its peak, less than one-third of Americans identified as supporters, according to Gallup data. But approval of the movement ran slightly ahead of that, meaning some people who did not exactly align with it at least sympathized with its convictions.

The Tea Party — which, like some of this week’s anti-restriction protests, was backed by well-funded interest groups — became a focal point for rallying opposition to President Barack Obama’s health care proposal. Trepidation about a health care overhaul was something that many Americans, including those who did not identify as libertarian, could tap into.

Partly for this reason, the Tea Party was able to elevate libertarian and other right-wing candidates in the 2010 midterm elections, when Republicans won a bigger net gain than in any congressional election in the previous 60 years.

For the anti-shutdown backlash to accrue a similar degree of clout, something other than libertarian outrage may need to become a central theme. Perhaps fear of undue economic strain could play this role.

But so far, concern about the virus remains top of mind. Fully 94 percent of voters in the Fox poll said they were concerned about the virus’s spread, and seven in 10 expressed grave concern. And even most Republicans told Pew that they thought the worst days of this pandemic were still to come.