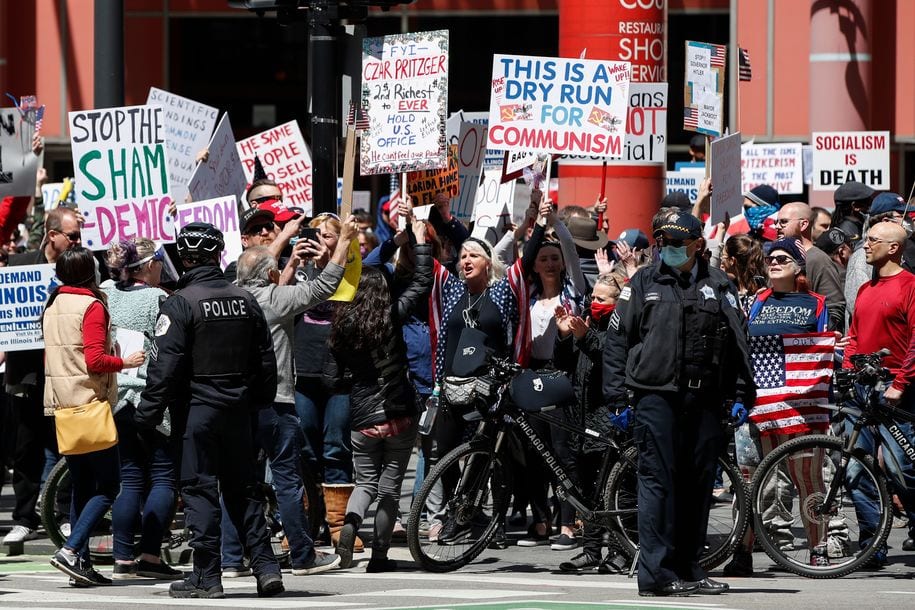 “Arbeit macht frei” was a false, cynical illusion the SS gave to prisoners of #Auschwitz. Those words became one of the icons of human hatred. It’s painful to see this symbol instrumentalized & used again to spread hate. It’s a symptom of moral & intellectual degeneration. https://t.co/ZRxja8x6eS

In the women’s sign, the upside-down “B,” resembles that of the sign outside of the gates of Auschwitz. According to the museum, these signs were placed outside of at least five concentration camps, including Auschwitz, Dachau, Flossenbürg, Gross-Rosen, and Sachsenhausen. Holocaust survivors have shared that the sign was used by Nazis to spread false hope that if one worked hard enough they would be freed; but in the five years of the camp’s operation, about 85% of the prisoners were killed, Forbes noted.

While some questioned the legitimacy of the sign, Kosuth told BuzzFeed News that the image was not altered and was taken by his phone. While this degrading sign went viral on Twitter, it wasn’t the only xenophobic and anti-Semitic sign at the event. Another individual at the same rally shared on Twitter that she saw a poster that read “Heil, Pritzker,” in addition to an image of a swastika, The Guardian reported. Her tweet posted Saturday has since then been deleted.

The Chicago event wasn’t the first anti-lockdown protest to include racist imagery and signs. In Michigan, thousands came together to protest Gov. Gretchen Whitmer’s stay-at-home order on April 30 with racist signs and symbols. One protester compared the governor to Hitler holding a sign that read “Heil Whitmer.” While her name was misspelled the sign’s intention and message was clear. According to Business Insider, another sign read: “Trump, lock up the Nazi woman from Michigan.”

Confederate flags, swastikas, and other racist symbols and slogans are being used at anti-lockdown protests nationwide as people protest without following social distancing measures or wearing protective masks. Of course, Donald Trump supports all of this and takes pride in comparing himself to the ignorant protesters that are putting thousands at danger demonstrating amid the coronavirus pandemic. “They seem to be protesters that like me and respect this opinion, and my opinion is the same as just about all of the governors,” Trump said.

While protesting during a global crisis in itself is irresponsible and wrong, using signs that degrade and dehumanize individuals is out of the line and should not be accepted. Trump is supporting not only a potential surge in COVID-19 cases nationwide but xenophobic and racist behavior that should not be tolerated or condoned by anyone in power.