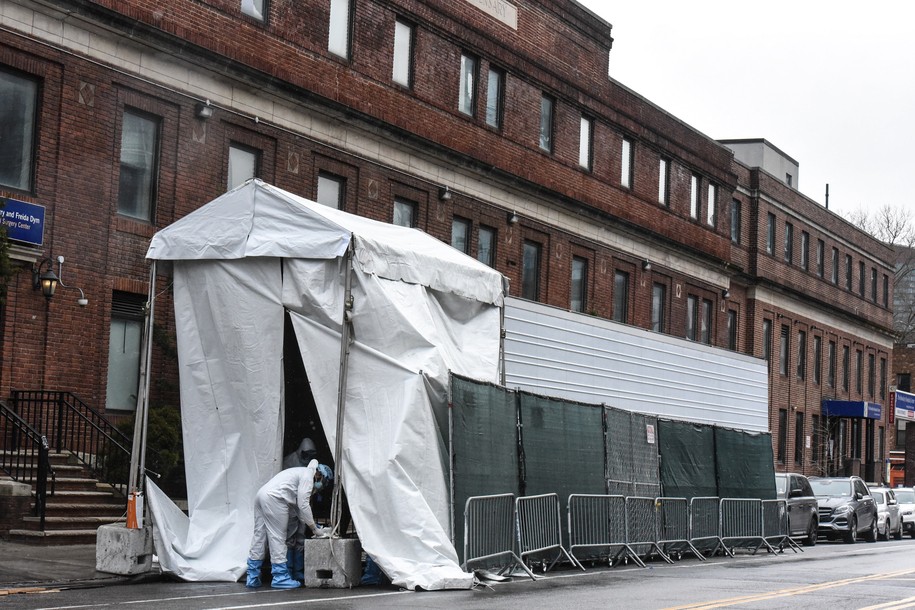 • A new New York Times visualization shows the damage done by federal inaction in the early days of the virus. If Trump had acted just two weeks earlier, 90% of U.S. deaths from the virus could have been avoided. The delays stand in stark contrast to the quick response by California experts and leaders, which appear to have successfully stalled the virus’ spread.

• The damage continues: Pandemic relief funds sent by check, rather than direct-deposited into taxpayer accounts, are being delayed. The reason: A Trump order that the checks to Americans include his own name, which will require “changes to the programming that prints the automated checks.”

• As the federal government abandons nationwide testing efforts and testing rates fall in America, New York City announced it has contracted for production of its own COVID-19 tests.

• As layoffs move from blue collar workers to America’s white collar workforce, Congress may yet be goaded into a stronger sense of urgency in providing additional stimulus packages. Despite the pandemic, however, Congress is not expected to return from recess until May 4.

• The $1,200 one-time payments are quite obviously inadequate to prevent mass poverty during the pandemic. Democrats are now proposing relief measures of $2,000 per month to Americans making less than $130,000 per year.

• Democrats have also released their own plan to reopen the economy. A key measure: $30 billion in funding for universal testing.

• Republican Rep. Trey Hollingsworth, of Indiana, is being harshly criticized for advocating for a rapid reopening of the economy in an interview in which he called the American deaths that would result “the lesser of these two evils.”

• The Washington Post reports that after the Trump administration’s “detailed pandemic response plans” failed to foresee the need for the White House itself to stock masks in preparation for the pandemic, the administration was forced to liberate 3,600 surgical masks from a shipment intended for the national stockpile.

• State attorneys general are asking the Supreme Court to reconsider its decision allowing the Trump administration to refuse entry for immigrants under a new “public charge” rule, arguing that the rule “threatens legal immigrants for accessing health benefits and during a pandemic, the risks of forgoing care are enormous.”

• Sen. Sherrod Brown directly told Trump Treasury Secretary Steven Mnuchin action would be needed to ensure pandemic relief checks to Americans were not instead seized by banks and debt collectors. Mnuchin could issue a rule suspending that ability, but so far has not done so.

• Wisconsin Republicans blocked a rescheduling of the state elections during the pandemic. That may have backfired, as Republican-leaning elderly at-risk voters were both more likely to stay home and less likely to have the technological knowledge to meet new Republican-backed vote-by-mail requirements.

• Four more medically vulnerable detainees were released by immigration officials after an ACLU lawsuit was filed.

• Black women have been slammed the hardest by pandemic-caused unemployment, with 54% of Black women laid off, furloughed, or on fewer hours as a result of pandemic cuts.

• A domestic worker fired due to the pandemic is sharing her personal story.

• Transportation workers who die of COVID-19 while working for New York’s MTA will now receive “line of duty” death benefits. At least 59 city transit workers, deemed “essential” during the crisis, have died.

• Most Americans disapprove of the way Trump is handling the coronavirus response, even as other world leaders see spikes in their own approval ratings.

• Jerry Falwell Jr.’s Liberty University is now being sued by students who accuse Falwell of misleading them about the campus remaining open during the pandemic—then refusing to refund room and board fees collected based on those assurances.

• Why are some grocery store shelves bare? It’s all about the supply chain.

• Nurses speak out: “We are doing our job. It’s time for the president to do his.”

Video: She was in a coma when she gave birth. See her meet her baby for the first time

Video: She was in a coma when she gave birth. See her meet her baby for the first time