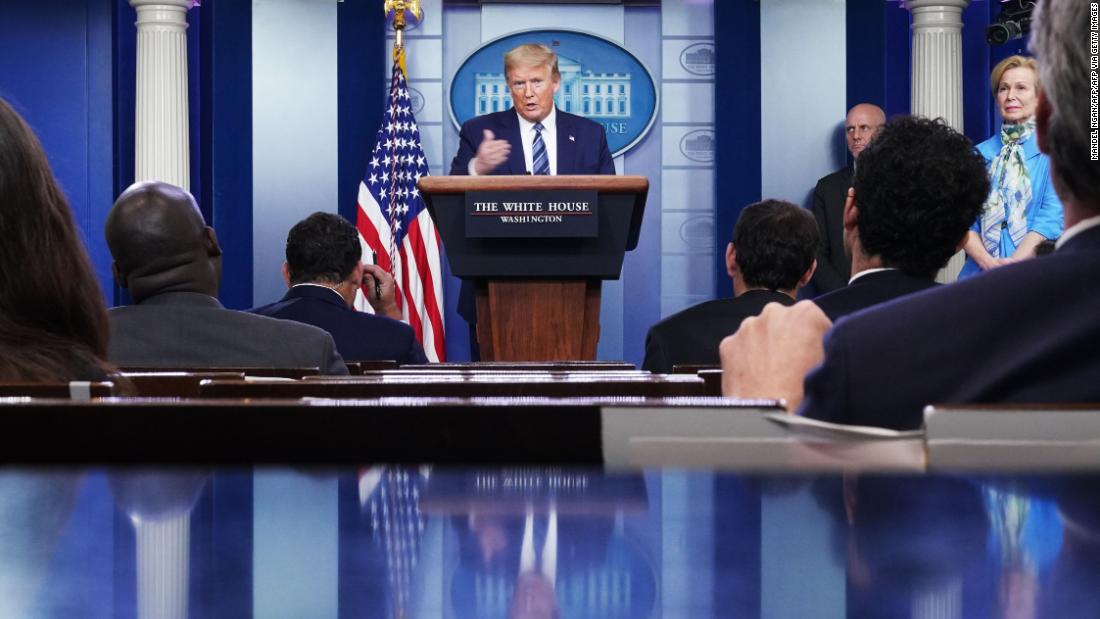 For Americans, the President’s absence from the podium might have been the best medicine at a time when states are beginning to reopen and they are seeking guidance from scientists and medical experts about whether it is safe to venture from their homes.
For weeks now as aides and allies have urged Trump to stop doing daily briefings, the President has commandeered the microphone, dispensing self-congratulatory assessments of his administration’s handling of the pandemic. He’s questioned some governors’ desperate pleas for personal protective equipment, ventilators and Covid-19 testing equipment. He has railed at state officials who don’t seem sufficiently grateful to him and snapped at reporters for “nasty questions” and unflattering news coverage.
Instead of focusing on scientific guidance from doctors and experts, the briefings under Trump’s control have often taken on the braggadocios tone of the President’s political rallies, leading to worries among Democrats about the fact that former Vice President Joe Biden, his presumptive Democratic rival, has no equivalent platform.
While Trump does share the microphone with his medical advisers like Dr. Anthony Fauci, Food and Drug Administration Commissioner Dr. Stephen Hahn and Dr. Deborah Birx, the President’s own statements about the coronavirus at the podium have been threaded with falsehoods and inaccurate information, often stoking confusion that has to be cleared up later by his team.
On Thursday, Trump’s tendency to muse aloud about baseless theories that usually live in the dark corners of the Internet veered into dangerous territory as he questioned whether it would be possible to kill the coronavirus by streaming light into the body or through a shot of disinfectant.
With aides clearly concerned that contradicting him might lead to their exits during a pandemic, no one corrected him in that moment. On Thursday in the midst of Trump’s tangent about disinfectant, Birx stared hard at the floor, briefly telling him when he asked, that she’d never heard of sun or heat as a coronavirus treatment.

The consequences were serious: in the past few days state officials and disinfectant manufacturers have rushed to warn Americans about the dangers of using chemicals or household cleaners in any other manner than what is printed on the label.

During a Saturday afternoon briefing, Illinois Public Health Director Dr. Ngozi Ezike reported a significant increase in calls to poison control, including, she said, someone who tried using a detergent-based solution like a sinus rinse and another person who gargled with a bleach and mouthwash mixture in an effort to kill germs.

“Injecting, ingesting, snorting household cleaners is dangerous,” Ezike warned. “It is not advised and can be deadly.”

Trump’s controversial comments offered an opening to Biden, who weighed in on Twitter: “I can’t believe I have to say this,” Biden tweeted Friday, but please don’t drink bleach.”

In the midst of shifting explanations from the White House about the context of Trump’s remarks in Thursday evening’s briefing, the President hinted Saturday that his days at the briefing room podium might be coming to an end.

In one tweet, Trump questioned the value of holding White House press briefings, saying they are “not worth the time & effort” if the media is going to just ask “nothing but hostile questions.” Trump also noted the “record ratings” for his appearances.

In a subsequent tweet, he tried to rewrite the narrative about his own early skepticism about the origins and potential spread of Covid-19.

“I never said the pandemic was a Hoax! Who would say such a thing?” Trump tweeted Saturday. “I said that the Do Nothing Democrats, together with their Mainstream Media partners, are the Hoax. They have been called out & embarrassed on this, even admitting they were wrong, but continue to spread the lie!”

As CNN has reported, Trump used the term hoax when he compared Democratic criticism of the administration’s response to the virus to their efforts to impeach him: “This is their new hoax,” he said at a February 28 rally in South Carolina.

Shifting explanations from the White House

After abruptly leaving the briefing room Friday without taking any questions from reporters who were seeking to clarify his comments about injections, Trump continued to try to shift blame to reporters for misunderstanding him throughout the weekend.
During a Friday bill signing ceremony in the Oval Office, Trump insisted he had made the comments sarcastically to reporters, even though there was no hint of sarcasm in his Thursday delivery.

During an interview with Fox News, Birx suggested that Trump was simply processing the information from a prior briefing aloud.

“When he gets new information, he likes to talk that through out loud and really have that dialogue — and so that’s what dialogue he was having,” Birx said. “I think he just saw the information at the time, immediately before the press conference, and he was still digesting that information.”

On Saturday, Trump continued the debate, curiously quibbling with the fact that reporters had recounted his back-and-forth with Birx about the effect of heat, sun and light on the coronavirus, asserting that he was speaking to “our Laboratory expert, not Deborah, about sunlight etc. & Coronavirus.”

Shortly before Trump’s Thursday remarks, he had been briefed by William Bryan, the acting head of science at the Department of Homeland Security, who had presented findings from a study about whether the spread of coronavirus could be slowed by warmer weather.

Bryan summarized the study in the briefing room, also discussing how ultraviolet rays and disinfectants, including bleach and alcohol, may shorten the life of the virus. (Bryan does not have a medical background and is not a scientist).

That seemed to carry Trump’s train of thought toward the notion that disinfectant might be used inside the body: “I see the disinfectant, where it knocks it out in a minute. One minute. Is there a way we can do something like that, by injection inside or almost a cleaning?” Trump said Thursday during the briefing. “Because you see it gets on the lungs and does a tremendous number on the lungs.”

McEnany pushed back on reporters’ questions Saturday over whether the White House was sending mixed messages about the context of the President’s suggestion.

“Taking a sarcastic comment and running with negative headlines is the definition of taking something out of context, so I believe those answers are very much in sync,” she told reporters at the White House.

McEnany would not say whether the President plans to dial back his participation in the coronavirus task force briefings after his abrupt departure from the briefing room Friday.

“I leave that to the President,” she said. “That’s entirely his decision, but I believe the President is at his best when he’s speaking directly to the American people.”

When asked why he did not take questions Friday, she noted that “the President has taken questions for 49 briefings since the end of February.”

Suddenly working remotely? You and your coworkers can still unionize