Suddenly working remotely? You and your coworkers can still unionize 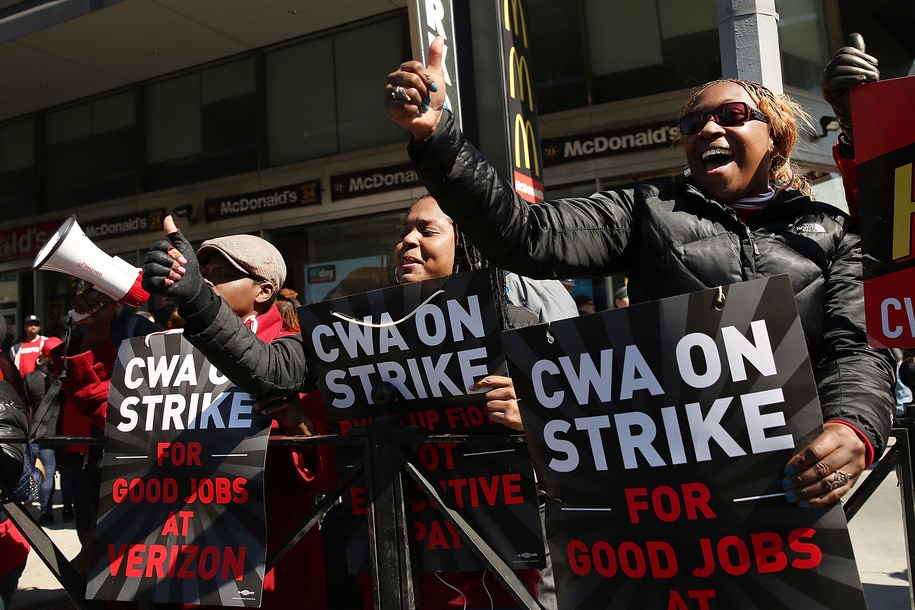 “Certainly working from home does present many challenges that can keep a union from forming, but the use of technology can alleviate that concern,” said Edgar Ndjatou, the executive director of Workplace Fairness, an organization that provides information and resources to help workers learn about their rights. “Despite the decline in labor activity and things that have made unionizing more difficult, one positive is that [the labor market] has shown that it can adapt. Workers are still able to organize and at the very least be a force in politics.”

Some union leaders expressed similar confidence in the ability to transition.

“I do acknowledge the potential for employers to continue the work-from-home model as a future option, but I am confident in the commitment of our union and the [collective bargaining agreements] we hold with employers allowing for terms to be negotiated fairly,” said Orange Richardson IV, president of the San Francisco chapter of the Communications Workers of America (CWA). “I personally am not wary of things changing drastically too soon. If employers do decide to make those changes, our union will be there to not only protect the interests of our membership but also protect the viability of each [collective bargaining agreement].”

In 2019, only 10.3% of wage and salary workers in the U.S. were members of unions. That number is down from 20.1% in 1983, when union data was first made available. But even with union membership in the U.S. continuing to shrink, the shift to a virtual workplace shouldn’t deter workers from unionizing. Virtual labor organizing still allows workers to advocate for better pay and benefits, more consistent work schedules, and more influence over workplace policies.

Organizers in a bargaining unit only need 30% of employees to sign on to file an election petition with the National Labor Review Board, supporting a workplace election on the question of whether to unionize. Then, the board reviews the petition and verifies eligibility. At that time, employers must post a public notification in a conspicuous place that states that a petition has been filed. For those working remotely, that notice must be sent electronically. Finally, after an agreement has been reached between the National Review Board, the union, and the other parties to secure a place and time for an election and determine the language on the ballots, employees can vote. If the majority of employees vote to support it, they become part of a union.

Unions have long been a tool to pull people into the middle class, particularly Black workers, who are more likely to belong to a union than any other ethnicity. Currently, union workers on average earn up to 18% more than non-union members. Public sector workers—people like mail carriers, members of law enforcement, firefighters, and trash collectors—are the most likely to belong to a union, but less likely to be able to adapt to a remote work environment. For those in already-existing unions, worker’s rights advocates say the fear of breaking up is always an overarching concern.

But even with a transition to full-time remote work, labor laws will remain intact. That means laws that are enforced in office spaces—such as workplace discrimination laws and harassment laws—would still apply. That also means workers should still be able to unionize without retaliation thanks to the National Labor Relations Act. Whether they’ll want to or realize they have the tools to do it properly, however, is another question.

In 2015, employees at Gawker Media, which published websites like Jezebel (currently run by G/O Media, Inc.) and the now-defunct Gawker, voted to unionize. At the time, roughly one-third of their team worked remotely. They finalized their contract in 2016 with The Writers Guild of America East, the first of its kind for a digital media company.

“We had to really go through a rough process to figure out how to communicate with remote people and make sure they felt included in the process,” said Hamilton Nolan, a labor reporter for In These Times and a former senior writer at Gawker involved in the union organizing efforts. “It’s a danger if you’re trying to organize a union and a portion of people feel left out. That can be a stumbling block to successful organizing.”

Not long after Gawker Media unionized, other major digital media companies like HuffPost and Vice followed. Through the successful unionizing efforts at both news outlets, employees were able to obtain things like guaranteed annual raises, minimum salaries for newsroom jobs, increased newsroom diversity, and editorial independence.

“[Organizing with a remote team] can be a challenge, but by the same token, it’s not a challenge that people can’t handle,” said Nolan. “When you look across the media and at all the newsrooms that have unionized in the last five years, half of them have remote workers, I guarantee you. So everyone that has unionized in the media has had this issue.”

But for some remote companies, the effort to unionize hasn’t worked out as smoothly. In December, members of the remote staff at Everlane, a direct-to-consumer clothing company, announced plans to unionize. This month, after gathering enough support and asking the CEO for recognition, dozens of members of the team—including the most vocal union supporters—were laid off. Everlane denies the decision to lay off staff was a move to union-bust, but representatives from CWA said they believe the layoffs were a direct result of the team’s union organizing efforts.

“This was not solely disappointing, but additionally illegal,” wrote Richardson in a letter to Everlane’s CEO. “We all know that Everlane has as its mission radical transparency and moral remedy and so in light of this we’re asking you to rethink this motion, re-hire the terminated distant CX staff, make them entire, and acknowledge their union.”

Even though remote teams don’t always have the ability to connect with colleagues in person, there are still tools they can use to help with organizing efforts. For instance, the National Labor Relations Board helps workers by granting access to employee names and addresses during an organizing campaign. Video conferencing platforms like Zoom and private Slack workspaces can also help workers unionize without fear of retribution.

For remote workers interested in gathering support to unionize, worker’s rights advocates advise against using company equipment for discussions. Even though the National Labor Relations Board emphatically reversed years of legal precedent that banned employees from using workplace emails for union organizing, advocates warn that using company property to organize can still lead to trouble.

“Your company could still access the software and monitor the usage of your hardware and it’s totally legal,” Ndjatou said. “Remember to use your personal Zoom account or personal cell phone number. Don’t let the other side know what you’re up to because they could potentially engage in retaliation.”

Though labor laws won’t change for people transitioning into full-time remote work, workers will still have to adapt. For those already in unions who might be switching to a virtual workspace, it’s unlikely their union will break up, especially if communication is strong.

“[Working remotely] shouldn’t stop you from organizing,” Nolan said. “Speak with a union or a union organizer. This is the kind of issue you can talk to them about and ask about what strategy you can use to make sure that communication is good. It’s probably going to involve a lot of conference calls. I’ve spent many hours of my life on those calls and it can be a little bit of a pain in the neck sometimes, but it’s worth it.”