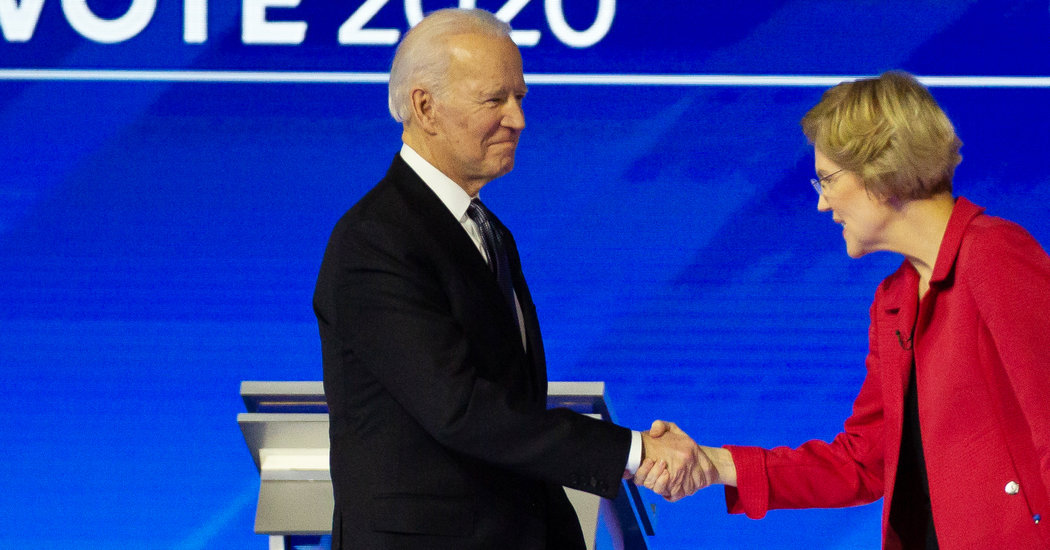 Senator Elizabeth Warren of Massachusetts endorsed Joseph R. Biden Jr. on Wednesday, the latest in a string of prominent endorsements for the presumptive Democratic presidential nominee.

Her announcement follows Senator Bernie Sanders’s on Monday and former President Barack Obama’s on Tuesday. Ms. Warren’s support had been a foregone conclusion for a while, but she left the timing of her announcement up to Mr. Biden’s team, according to people familiar with the matter. There was no holdup or demand for concessions, these people said.

The series of endorsements has been a carefully choreographed show of force, reminiscent of the one-two-three punch of support Mr. Biden received from Pete Buttigieg, Amy Klobuchar and Beto O’Rourke before Super Tuesday. It is also a show of unity designed to quash the narrative of a fractured Democratic Party.

“In this moment of crisis, it’s more important than ever that the next president restores Americans’ faith in good, effective government,” Ms. Warren said in her endorsement video. “Joe Biden has spent nearly his entire life in public service. He knows that a government run with integrity, competence and heart will save lives and save livelihoods. And we can’t afford to let Donald Trump continue to endanger the lives and livelihoods of every American.”

Since Ms. Warren ended her own campaign, she and Mr. Biden have spoken multiple times about policy issues, including Mr. Biden’s plan to respond to the coronavirus pandemic. At the staff level, Ms. Warren’s chief campaign strategist, Joe Rospars, and Anita Dunn, a senior adviser to Mr. Biden, have been engaged in talks bridging the two camps.

In late March, Mr. Biden endorsed forgiving at least $10,000 in federal student loans and credited Ms. Warren for the proposal. Over the weekend, he said during his podcast that he supported immediately increasing Social Security payments by $200 a month, another proposal that Ms. Warren had championed.

“One thing I appreciate about Joe Biden is that he will always tell you where he stands,” Ms. Warren said in her endorsement video. “When you disagree, he’ll listen — not just listen, but really hear you and treat you with respect, no matter where you’re coming from. And he has shown throughout this campaign that when you come up with new facts or a good argument, he’s not too afraid or too proud to be persuaded.”

The Biden campaign has broadly signaled a willingness to hire staff from formal rivals as they gear up for the general election matchup with Mr. Trump, but there have been no promises to hire a specific number of aides, a person familiar with the matter said.

Anna Greenberg, a Democratic pollster, said she was not worried about disunity. The primary “just didn’t have the vitriol” of 2016, she said, and Democratic voters are overwhelmingly in favor of a singular goal.

Mr. Biden’s campaign hopes to use the endorsements not only as a display of party unity but also as a means to pump up his fund-raising, which people involved in the campaign have said has gotten tougher in the last month as the economy has cratered.

Notably, both Mr. Obama and Ms. Warren posted a link asking for donations to Mr. Biden, and Mr. Obama quickly signed an email to the Biden campaign list.

A weaker fund-raiser than his top rivals in the primary, Mr. Biden now enters the general election at a distinct financial disadvantage. President Trump and the Republican National Committee have been stockpiling cash for three years, and announced on Monday that they had entered April with $240 million cash-on-hand in the president’s re-election committee and other shared party accounts.

Without traditional in-person events, Mr. Biden has had to shift to videoconference fund-raisers with top donors, which some contributors have been slow to embrace. He has a virtual fund-raiser scheduled for later on Wednesday, hosted by Joe Kiani, the chairman of Masimo, a medical device company.

‘You will face the law’, ex-Tshwane councillors warned amid ‘illegal trading permit’ scandal

'You will face the law', ex-Tshwane councillors warned amid 'illegal trading permit' scandal