Fact check: Trump lies that he was being ‘sarcastic’ when he talked about injecting disinfectant 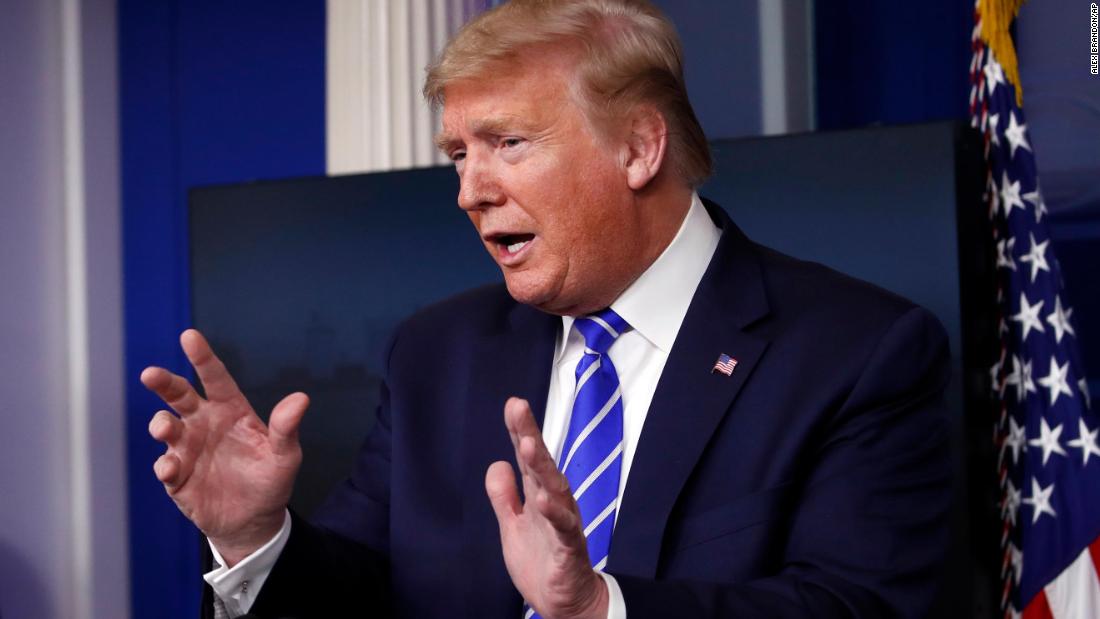 Doctors and the company that makes Lysol and Dettol warned that injecting or ingesting disinfectants is dangerous. But when Trump was asked about the comments during a bill signing on Friday, he said, “I was asking a question sarcastically to reporters like you just to see what would happen.”

He then suggested he was talking about disinfectants that can safely be rubbed on people’s hands. And then he returned to the sarcasm explanation, saying it was “a very sarcastic question to the reporters in the room about disinfectant on the inside.”

Facts First: Trump was not being “sarcastic” on Thursday when he raised the possibility of injecting disinfectant. There was simply no indication that he was being anything less than serious. He was also wrong Friday when he denied he had asked the medical experts to “check” the idea of disinfectant injections; he was looking at them at the time. And he did not mention hands during his Thursday remarks.

Here’s what Trump said Thursday while looking in the direction of coronavirus response coordinator Dr. Deborah Birx and Department of Homeland Security science official Bill Bryan: “And then I see the disinfectant, where it knocks it out in a minute. One minute. And is there a way we can do something like that, by injection inside or almost a cleaning. Because you see it gets in the lungs and it does a tremendous number on the lungs. So it would be interesting to check that. So, that, you’re going to have to use medical doctors with. But it sounds — it sounds interesting to me.”

What happened on Thursday

Bryan, the acting undersecretary of science and technology for the Department of Homeland Security, outlined tests in which he said disinfectants like bleach and isopropyl alcohol quickly killed the coronavirus on surfaces. Bryan also spoke about how the virus was found to be negatively affected by exposure to UV rays and higher temperatures.

Trump first spoke about the possibility of using light as a treatment for people who already have the coronavirus, musing that a “very powerful light” could be used to “hit the body” or be brought “inside the body…either through the skin or in some other way.” Trump said Bryan had said he is going to “test that.” (Experts said this idea does not make sense; when Trump asked Birx if she has heard of the use of heat or light related to the virus, she said, “Not as a treatment.”)

Bryan said he would “get to the right folks” who could do testing. Trump then began his comments about disinfectant, which he concluded by saying “it sounds interesting to me.”

Reminded by a reporter on Friday that he had been looking at Birx when he made these Thursday comments, Trump said he was looking at Bryan, Birx, but also “some of the reporters.” In fact, the video shows he was looking in the direction of Birx and Bryan for almost the entirety of his musings about disinfectant, glancing forward at reporters only very briefly.

Later in the Thursday briefing, when a reporter asked Bryan if there is any scenario in which household cleaners could be injected into a person, Bryan said, “No, I’m here to talk about the findings that we had in the study. We won’t do that within that lab and our lab.” Trump then interjected: “It wouldn’t be through injection. We’re talking about through almost a cleaning, sterilization of an area. Maybe it works, maybe it doesn’t work. But it certainly has a big effect if it’s on a stationary object.”

So: Trump can argue that he walked back his comments during the briefing. But even in this more cautious follow-up, he offered no indication that he had been anything less than completely serious.

The White House’s initial statement on Friday about the disinfectant remarks did not say the President had been sarcastic. It only alleged that the media had taken him out of context.
Trump has a history of falsely claiming that serious but controversial remarks had been sarcasm. For example, he has insisted that his famous 2016 “Russia, if you’re listening” request for Russia’s help obtaining Hillary Clinton emails was him being “sarcastic” and making “a joke.”

Medical experts and government entities issued sharp warnings late Thursday and on Friday against injecting or ingesting disinfectants, noting that doing so could be deadly.

“It could definitely kill you,” Dr. Colleen Kraft, an associate professor of infectious diseases at the Emory University School of Medicine, told CNN’s Poppy Harlow Friday.
“This is a reminder that under no circumstances should any disinfectant product be administered into the body through injection, ingestion or any other route,” Maryland’s Emergency Management Agency tweeted Friday.
“Household cleaners and disinfectants can cause health problems when not used properly. Follow the instructions on the product label to ensure safe and effective use,” the US Centers for Disease Control and Prevention tweeted Friday.

This story has been updated

Tags: Fact check: Trump lies that he was being 'sarcastic' when he talked about injecting disinfectant - CNNPoliticspolitics
Previous Post