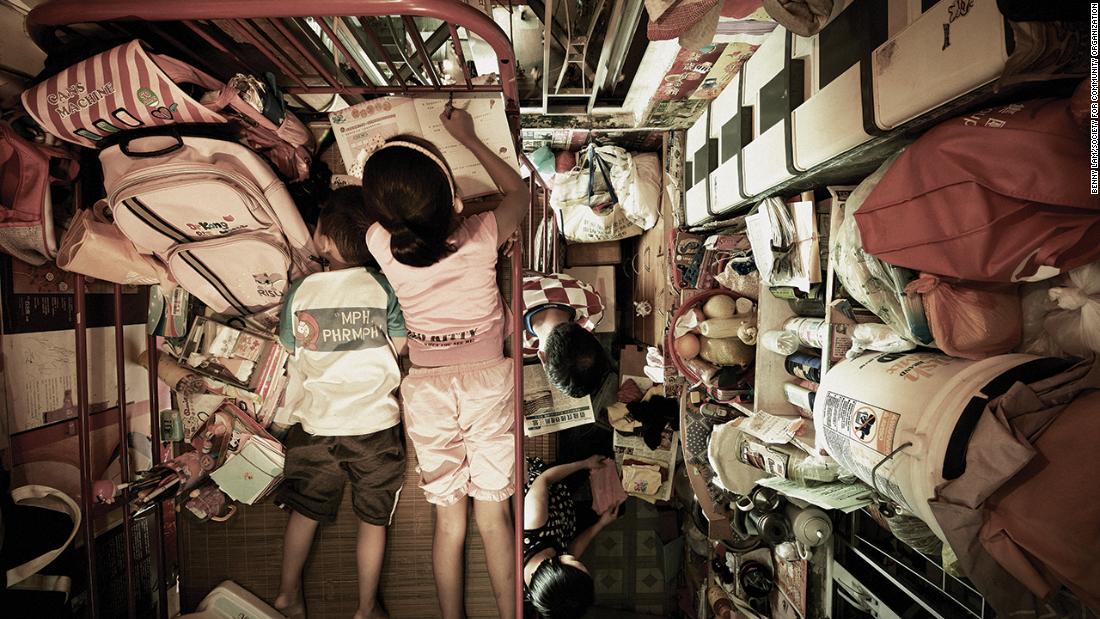 Vigilantly practicing social distancing at home isn’t an option for Lum. He lives in one of Hong Kong’s “cage homes,” subdivided apartments that often have space for only a bed and some clothes. His closest neighbor is just a few feet away, inside the same room.

Cage homes are usually smaller than 100 square feet, only 25 square feet larger than most of the city’s prison cells. Bathrooms are mostly communal and often there are no kitchens — just plug-in hot plates. Units are mostly divided by makeshift or removable walls.

To make things worse, many public areas are closed due to the pandemic. Libraries are shuttered. Jungle gyms in parks are taped off. Restaurants have slashed capacity, and bars have been forced to close, unless they serve food. Public gatherings are limited to four people.

Despite having had the virus since January, Hong Kong has recorded fewer than 1,050 infections and 4 deaths, so few citizens disagree with the restrictions. But that doesn’t make them easy to live with.

“I’m so lonely,” Lum said. “There isn’t that same atmosphere on the streets like there was before. So few people sit in the parks. People used to watch the children play and the elderly play badminton.”

How long can people like Lum be expected to stay at home?

‘You really think we out here scared of jail?’

While that lifestyle exists, it is far from the norm — Hong Kong is one of the most economically unequal places in the world, where an estimated one in five people live in poverty. Skyrocketing real estate prices were one of the major issues that drew protesters to the streets during last year’s months of political unrest.

The virus has only pronounced that inequality, as poor people are forced to retreat into their cage homes.

Cheung Lai Hung and Chan Yuk Kuen, two retired women in their late 50s, say that since the pandemic they’ve been spending an extra 10 hours a day in their 100-square-foot apartments. They pass the time by watching TV, listening to music or napping.

There’s another factor forcing many to stay home: job insecurity.

Jeff Rotmeyer, the founder of the charity Impact HK, which assists the city’s needy, said many people seeking help from the organization recently have reported having their hours cut, or worse having lost their jobs.

Others have been kicked out of their homes because they couldn’t pay rent, Rotmeyer said.

“I don’t think people understand how on the brink Hong Kong is of a complete disaster in terms of this demographic that live in apartments or boxes less than 100 square feet,” Rotmeyer said.

“One hiccup, like a job loss or a late government check, it will result in homelessness. These landlords are not forgiving people. They’re not flexible. And they’re very, very quick to change your locks and kick you out if you don’t pay one month of rent.”

On an unseasonably cold Tuesday in early April, Lum joined a group of more than 100 of people lining up for a free dinner in the Hong Kong neighborhood of Tak Kok Tsui, west of Mong Kok and Sham Shui Po — two of the city’s poorest and most densely populated districts.

The queue that snaked down the thin sidewalk was longer than usual, said Rotmeyere, and comprised of middle-aged folks like Lum, elderly retirees and people newly out of a job.

The desire to get fed seemed to trump the need to practice social distancing, as people huddled in the long line.

“You do see a little more panic and fear in individuals, because the truth is if they don’t get food here right now with us, they probably just won’t eat,” Rotmeyer said. “We’re trying to social distance these individuals as they line up, but it is difficult.”

Everyone CNN spoke to in line for food was aware of the need for social distancing. Many said they were practicing better hygiene and washing their hands more often, per the government’s advice. But few seemed to understand how far apart they should keep from other people — groups should stay 1.5 meters (5 feet) apart under government guidelines.

When asked about the difficulties of maintaining a proper distance between others in such small living spaces, several cage home-dwellers shrugged and said that everyone in their subdivided units just closed their doors.

“It’s obviously not that fair because we have to distance ourselves from people. But if that’s what we need to do then we’ll do it,” said Cheung, one of the two retired women. “Hopefully, it will help make the virus go away sooner.”

City officials have announced $37 billion worth of measures to stave off the economic effects of the global pandemic, including multiple tax breaks, rental assistance for low-income tenants in public housing, government-backed low-interest loans for small and medium enterprises, and a 10,000 Hong-Kong-dollar ($1,290) cash payout to all permanent residents over age 18.

Less has been said, however, about the psychological impact of self-isolating in a tiny space, and the mental toll of slashing time spent socializing.

The Hong Kong government recently earmarked about 50 million Hong Kong dollars annually ($6.5 million annually) for “on-going mental health promotion and public education initiative,” said a spokesman, and set up a website to assist people in this space. It has asked NGOs to make some services free.

“It has indeed been a challenge to practice social distancing in a densely populated and vibrant city like Hong Kong,” the spokesperson said in a statement, adding that people weren’t banned from going out and that many had been visiting the city’s country parks.

For Lum, respite from the mental health effects of the pandemic can’t come soon enough. He no longer speaks with his family, which makes dealing with his loneliness and fear harder.

He often passes the time by sitting by himself and drinking beer. By his own admission, it’s no panacea.

“It’s very lonely. I have a couple of beers then go home and sleep,” he said. “I hope this virus can go away soon and that Hong Kong can go back to being the busy city that it was. An exciting city.”