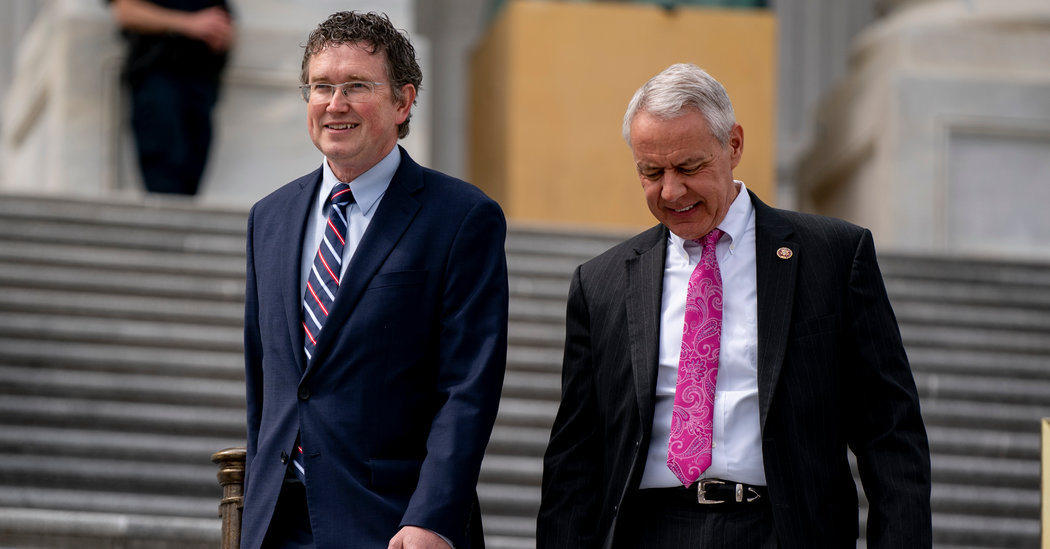 WASHINGTON — Always one to start a revolt, Representative Thomas Massie is now facing one down — from his own colleagues — less than two months away from his election.

Mr. Massie, a libertarian from Kentucky known for his contrarian streak, last month drew the wrath of Democrats, Republicans and President Trump when he objected to the passage of a $2.2 trillion coronavirus relief package without a recorded vote, forcing scores of lawmakers to defy public health guidance and drive or fly back to the Capitol amid the rapidly spreading pandemic.

The move so infuriated members of his own party that the third-ranking House Republican, Representative Liz Cheney of Wyoming, donated to his primary challenger, Todd McMurtry, in a stunning repudiation of a sitting lawmaker by a member of the leadership. Representative Michael R. Turner, Republican of Ohio, also donated, telling Mr. Massie in an acerbic message on Twitter that he did so “because I believe that you don’t belong in Congress.”

The donations reflected the depth of Republicans’ long-simmering contempt for Mr. Massie, who has for years created procedural headaches and intense frustration for party leaders as the “Mr. No” of the conference, opposing even symbolic legislation as a matter of principle. But in their eagerness to inflict political pain on Mr. Massie, Republicans appear to have handed him a potentially potent political weapon of his own.

Mr. McMurtry, a lawyer who gained prominence when he defended a Covington Catholic student who sued CNN over its coverage of his encounter with a Native American protester in front of the Lincoln Memorial, has written and shared a series of Twitter posts and articles that contain racist tropes, anti-immigrant sentiment and transphobic material.

In one tweet from December 2019, Mr. McMurtry wrote of the “need to push back against demonization of white people,” adding that “we should not be willing scapegoats for someone else’s agenda.” In another, he complained that “some cartel-looking dude is playing a video of some wild Mexican birthday party at full volume” in an airport, and cited it as a reason that “we should question unlimited immigration. We just cannot integrate so many people.”

In a separate tweet, he approvingly shared a 2016 blog post subtitled “A Very Brief Primer on Being Alt Right,” which condemned as “cowards” people who describe themselves as conservatives and embrace a progressive agenda, saying they were afraid of being branded “racist, sexist, homophobic.”

“Let’s see them start telling the truth about transsexualism being a mental illness, or about the implication of IQ disparities between different racial groups,” the post read in part.

In an interview on Friday, Mr. Massie questioned why Ms. Cheney would donate to Mr. McMurtry, citing the posts.

“He has views on race and culture and ethnicity that I don’t think have a place in the G.O.P.,” Mr. Massie said. “But maybe Liz has a different plan for the party, and maybe she thinks backing an alt-right candidate would curry favor with part of the conference.”

In a statement on Friday evening, Mr. McMurtry’s campaign manager did not disavow any of the comments, but attacked Mr. Massie for highlighting them.

Jake Monssen, Mr. McMurtry’s campaign manager, said in a statement that Mr. Massie was “so desperate to save his failing campaign he’s now taking plays from the left and trying to smear Todd McMurtry with false, personal attacks.”

“Todd’s wife of 32 years is Puerto Rican and they raised their children in a bilingual household,” Mr. Monssen added. “Todd supports legal immigration and acculturation,” he said, noting that Mr. Massie “is willing to say anything against those with a different viewpoint, regardless of facts.”

Ms. Cheney has previously condemned members of her own conference for making racist comments. She was the first member of House Republican leadership to call for Representative Steve King, Republican of Iowa, to resign after he questioned whether white supremacy was offensive, calling Mr. King’s remarks “absolutely abhorrent” and “racist.”

An aide to Ms. Cheney suggested on Friday that she did not know about Mr. McMurtry’s comments when she donated to him, but also hinted that she was so determined to see Mr. Massie defeated that she would support virtually anyone looking to oust him.

“She hasn’t read the Twitter feed and she doesn’t endorse any racist view of any kind,” a spokesman for Ms. Cheney said. “She does oppose Thomas Massie. If another Republican were to challenge him, she’d seriously consider contributing to them, too.”

The antipathy appears to be mutual. Mr. Massie has long clashed with hawkish Republicans like Ms. Cheney, and he alluded to his disdain for their worldview on Twitter after her donation to Mr. McMurtry and that of Mr. Turner’s became public, writing: “I guess #neocons really do hate coming to work, while expecting nurses and truckers and soldiers to keep doing their jobs. Who knew?”

Mr. Massie’s race is less than two months away. After his move to force a vote on the stimulus bill, what was considered a sleepy race has been injected with a shot of intrigue. Mr. Trump sent out two hostile tweets targeting the Kentucky Republican, branding him “a third rate Grandstander” and calling for him to be thrown out of the party.

Mr. Massie, who was at home in Garrison, Ky., on Friday, said that he had spoken by phone with the president hours beforehand and that Mr. Trump had “articulated that it wasn’t a good political move.” He knew by proceeding that he was in danger of subverting one of his campaign strategies — to keep Mr. Trump out of the race.

“The only way that my opponent could get any traction was to get support from President Trump,” he said, noting Mr. Trump has a 96 percent approval rating among likely Republican primary voters in his district.

Mr. Massie has made no apologies for insisting that lawmakers should show up in person to record their votes on the behemoth spending package. But in the interview on Friday, he said he would not object to forgoing a floor vote on a change to House rules that Democratic leaders have embraced to allow for voting by proxy during the pandemic — so long as the process was sufficiently “transparent.” Mr. Massie said the rule should require that the names of those who voted in person and who voted by proxy be made public, along with the names of those whom absent lawmakers had authorized to vote on their behalf.

Since Mr. Massie’s attention-grabbing objection to the stimulus vote, Mr. McMurtry has also picked up the support of the Republican Jewish Coalition, which announced their endorsement of him only hours after the failed attempt to force a recorded vote on the House floor.

Mr. McMurtry has focused his efforts on painting Mr. Massie as insufficiently supportive of the president. But he is facing his challenges of his own. He has just $237,000 on hand compared with Mr. Massie’s $690,000, and he must figure out how to gain name recognition against a four-term congressman with a cult following at a time when he cannot knock on doors or hold in-person events.

Mr. Massie, in the meantime, has made the rounds on conservative talk radio and called supporter after supporter to explain his decision.

“The general impression that my constituents have is they like Thomas Massie, and they like Donald Trump,” he said. “And they had a disagreement one day, but they still like both of them.”