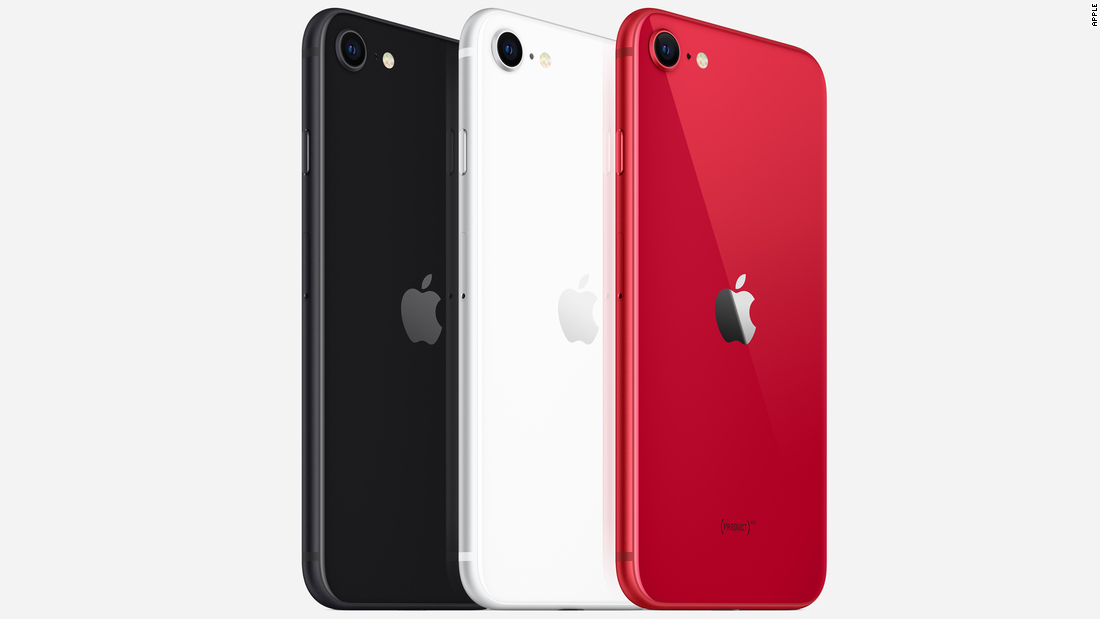 During a virtual presentation with reporters on Wednesday morning, a new normal for tech launches during the global pandemic, the company announced a new version of the iPhone SE, which launched in 2016. The second-generation SE model starts at just $399, far less than the entry-level iPhone 11, which costs $699, and the iPhone 11 Pro Max, which starts at $1099.

At 4.7 inches, the new SE is smaller than the latest lineup of iPhones — the iPhone 11 is 6.1 inches — but comes with the same fast processor that’s in the11 Pro. It also offers a Retina HD display, 4K video and a home button that enables TouchID.

The smaller size, display choice and Touch ID feature may help keep the cost down but could turn off customers who are accustomed to the current lineup of bigger iPhones with higher pixel density and an option to unlock via facial recognition.

But the new SE does pack a wide camera with image stabilization and faster autofocus in low light, along with features such as portrait mode, depth of field control and lighting adjustment tools. It has the same battery life as the iPhone 8.

The iPhone SE, which comes in white, black and red, is available for pre-order starting Friday and ships to customers on April 24.

The lower price point could allow Apple to attract more customers in both the US and internationally and better compete with Android-based manufacturers like Google and Samsung, which already offer cheaper iPhone alternatives.

The original iPhone SE also sold for $399 when it was introduced four years ago. The device packed the internals of the 4.7-inch iPhone 6 and the 5.5-inch iPhone 6S Plus into the 4-inch body of the iPhone 5, serving as an alternative for people who didn’t want a bigger device or the price tag that comes with it. The iPhone SE accounted for less than 10% of total volumes in 2016, according to IDC Research,.

The launch of another budget-friendly iPhone has been rumored for years, but the actual launch could be well timed given the current economic climate, with sweeping layoffs and the fears of a potential global recession. But launching the budget phone during the pandemic poses challenges, too.

In February, Apple sold fewer than 500,000 iPhones in China — one of its biggest markets — a plunge of more than 60% compared to the same month last year, according to government data. Apple’s retail stores, valuable real estate for the company to showcase its latest devices, are closed outside of China until further notice.
The pandemic will likely have a significant impact on Apple’s product plans for the year. In the fall, the company is widely rumored to launch four iPhone 12 models, a new HomePod and over-the-ear headphones. Some analysts suspect it could delay the launch of the much-anticipated 5G iPhone until consumer appetite returns.
In a similar virtual presentation last month, Apple unveiled its latest iPad Pro lineup. Across the tech industry, companies have been forced to cancel or rethink their big press events and conferences. Google and Facebook both canceled major developer conferences. Apple also said its Worldwide Developers Conference will be online-only this year.

Govt makes more donations to the Solidarity fund, as directors-general pledge R30K each