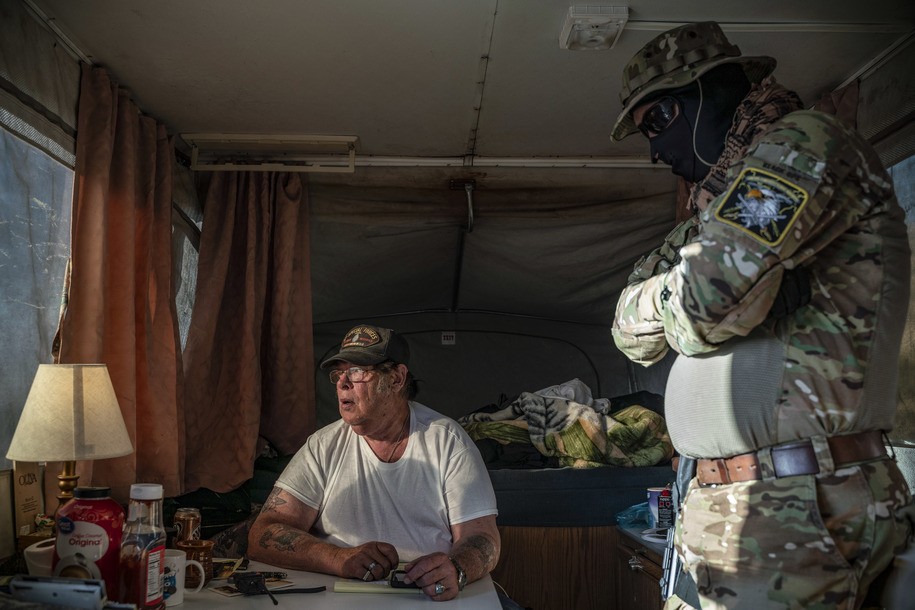 Hopkins ran an outfit he called the United Constitutional Patriots under the nom de plume Johnny Horton Jr., which was his stage name during an earlier career as a country singer. Well before he began running vigilante border watches, Hopkins issued paranoid, apocalyptic warnings from his home in the northern New Mexico town of Flora Vista on a regular basis. As he prepared to begin the watches, he posted a message on Facebook:

im 69 years old and i am going to the border when i know the enemy is close to the border, i am going to fight and i may give my life but at least i will be there and stand by my oath, they didnt get me when i was in the army and i will stand for our country, if they get me now at least i will die for our country and what keeping america free is all about, GOD WILL GUIDE AND PROTECT ME,

He and another man in Las Cruces—another would-be vigilante named Jim Benvie—set up their watch operation along an area of the Mexico border where there has been a recent flood of asylum seekers from Central America making the crossing. They began harassing the crossers, detaining them with guns—sometimes posing as federal officers—and holding them for the arrival of border patrol officers, who would then cart them away—all while filming the operations.

The two men liked to lecture the immigrants they detained on the need to obey American immigration laws.

Hopkins was arrested shortly after their videos made national headlines. Two FBI agents visited him at his home in Flora Vista, where he happily showed them his array of weapons, which included nine rifles. He was the victim of an assault while being held in the prison in Las Cruces.

After the arrest, Hopkins’ long and bizarre rap sheet became public. It included an arrest in Oregon for impersonating a police officer. (Hopkins had claimed he was working “directly under George Bush” and was doing “operations” in Afghanistan.) Benvie also was arrested for violating the terms of his bond and for impersonating a border patrol officer.

Hopkins was handed was given a 21-month prison sentence on April 15 during a hearing in Albuquerque federal court, according to the U.S. Department of Justice.