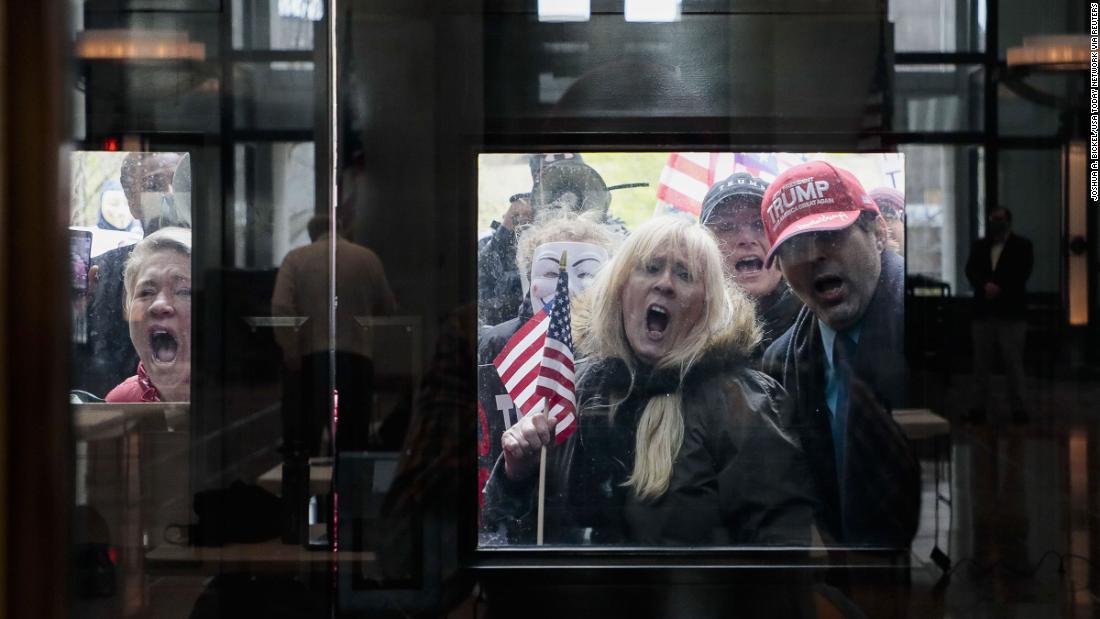 Michigan, Ohio, Kentucky, Minnesota, North Carolina and Utah — states led by both Republican and Democratic governors — have all seen protests in recent days as people grow more concerned about the economic fallout of the coronavirus pandemic.

“The sad part is, though, that the more they’re out and about, the more likely they are to spread Covid-19,” Whitmer said, “and the more likely we’re going to have to take this posture for a longer period of time.”

Protesters in Whitmer’s state crowded the streets of the capital on Wednesday by staying in their cars. The action, dubbed “Operation Gridlock” by its organizers, choked Lansing with traffic for miles.
“I realize how important this virus is, but now we’re getting to the point where we’re shutting too much stuff down,” protester Tom Hughey, who said he has a small business and works for Ford Motor Company, told CNN affiliate WILX.
Whitmer has extended the state’s stay-home order through April 30. It includes restrictions like prohibiting most people from traveling between residences unless they’re taking care of a relative or dropping off a child.

But not everyone stayed in their cars, per WILX — some stood on the grounds of the state Capitol.

“I think every single person here is probably going to get coronavirus, we’re all within six feet of each other,” Nick Somber told WILX.

The Michigan Nurses Association issued a statement calling the protest “irresponsible” and saying it “sends exactly the opposite message that nurses and healthcare professionals are trying to get across: we are begging people, please stay home.”

Some protesters met Thursday outside the governor’s mansion in St. Paul to voice opposition to Democratic Gov. Tim Walz’s stay-home order, which has been extended through May 3.

A spokesperson for the protesters told CNN affiliate WCCO they were demonstrating because Minnesotans are suffering from financial setbacks and depression, among other issues.

The group believed residents can go back to work while continuing to fight the coronavirus, WCCO reported.

“The Governor has said that we can’t lose our democracy during this pandemic, and this extends to people exercising their First Amendment rights,” Walz’s office said in a statement. “We ask that for the health and safety of themselves, their families, and their fellow Minnesotans that those demonstrating exercise good social distancing behavior.”

Walz previously emphasized that expanding testing and tracing would be important before the state can reopen, saying both had to be done “on a massive scale.”

Protesters demonstrated in the Kentucky capital of Frankfort, where Gov. Andy Beshear, a Democrat, had to speak over the noise during a news briefing Wednesday.

“We do have some folks up here in Kentucky today, saying we should reopen Kentucky immediately, right now,” Beshear said. “Folks, that would kill people. It would absolutely kill people.”

One protester told CNN affiliate WKYT that she agreed with Beshear’s measures at first, but had since changed her mind.

“I understand the need for caution,” she said, “but I think it’s gone way past, you know, anything reasonable.”

Protesters initially heeded social distancing, spacing out on the capitol grounds, according to WKYT. But that went out the window when they began chanting just outside the room where Beshear was holding his news briefing.

“Lot of fresh air out here. I don’t think I’m endangering anyone,” the woman told the station. “I think the governor is endangering a lot of people by not letting families work.”

One group protested in Washington County, where they declared Republican Gov. Gary Herbert’s restrictions unconstitutional, CNN affiliate KSL reported Wednesday.
“The government, at all levels, has overstepped its authority in their request to ‘protect’ Americans from a virus,” Mary Burkett, a Republican candidate for Utah’s 2nd congressional district who participated in the demonstration, said in a news release.

“The American citizen is perfectly capable of deciding how to best protect themselves,” she added.

According to KSL, protesters were asked to follow social distancing guidelines and were directed to demonstrate as individuals or families instead of in a large group.

The demonstration, which stemmed from a Facebook group called Utah Walk For Freedom, was meant to demand state and local restrictions be lifted “with appropriate precautions,” the group’s Facebook page said.

Herbert has extended the state’s “Stay Safe, Stay Home” directive through May 1, saying it is working.

“We cannot let up on these measures,” Herbert said in a news release last week, adding that slowing the spread of the virus will allow residents to get “back to work and to a level of normalcy more quickly.”

A group of protesters gathered in Raleigh on Tuesday — a demonstration that was in direct violation of Democratic Gov. Roy Cooper’s executive order, according to the Raleigh Police Department.

“We have God-given rights that are infringed upon right now, as we speak, every day that this state remains closed,” Ashley Smith, an organizer and business owner, told CNN affiliate WRAL.

Cooper said Wednesday the state needs to progress in testing and contact tracing in order to lift restrictions. He did not say whether he would extend his current restrictions, which prohibit gatherings of 10 or more people. The order is set to expire on April 29.

One participant, David Engstrom, told WRAL that “the economic disaster that’s going to happen … is going to be worse than any Covid-19 problems that we’ve had.”

At least one person was arrested by State Police, the Raleigh Police Department said on Twitter.

In a statement, the department cited the importance of the “health and wellness of all who live in our community, including the officers who must engage in circumstances such as these. We simply want everyone to be safe during this very serious public health crisis.”

In Columbus, demonstrators also gathered outside the statehouse, where they were overheard during Gov. Mike DeWine’s briefing on Monday, CNN affiliate WSYX reported.

DeWine, a Republican, acknowledged critics’ frustration on Twitter Tuesday, saying, “I get it. But it’s not going to do businesses and employees any good if we get it wrong. If we get it wrong, we’ll have a medical mess and a mess in the economy. The best thing we can do is get this right.”

DeWine’s stay-at-home order is set to remain in place until May 1, and includes limiting the number of customers allowed inside stores deemed essential businesses.

There are more than 7,700 cases of coronavirus in the state, and at least 362 people have died.

Tags: Protests are popping up across the US over stay-at-home restrictions - CNNus
Previous Post

Anti COVID-19 Measures May Have To Continue – Okoe Boye | Health

Anti COVID-19 Measures May Have To Continue - Okoe Boye | Health