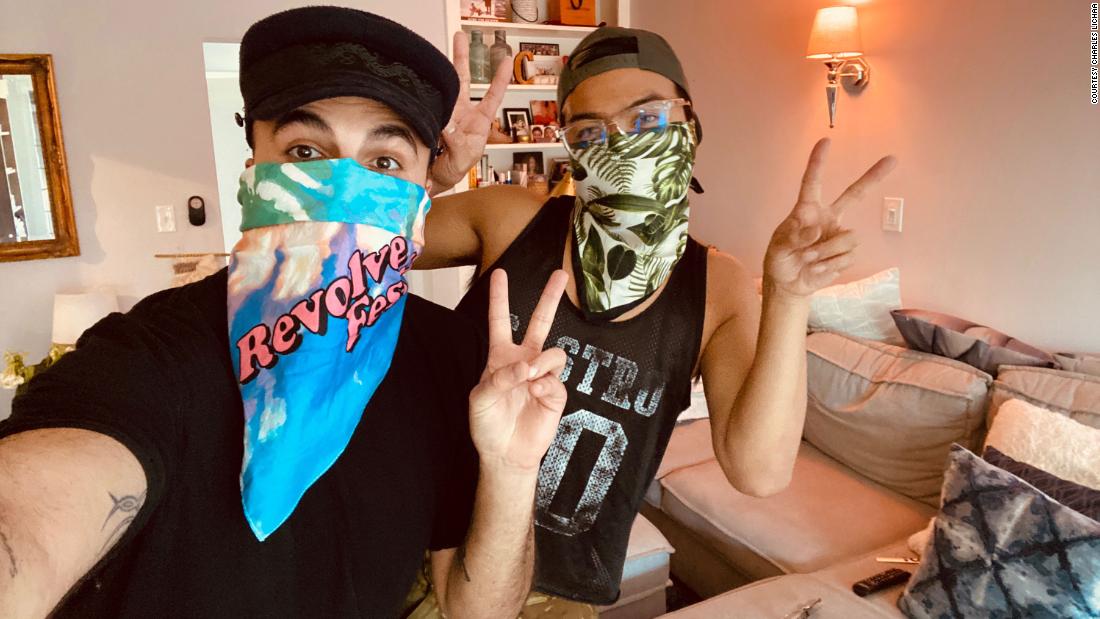 So, Charles Lichaa and Lo Noulinthavong decided to throw their own “homecoachella.”

At Lichaa’s West Hollywood, California, apartment last week, the two 30-year-olds sported colorful bandanas as masks, like they would in Coachella where the wind often blows dust around the festival grounds. Then they danced around, rewatching sets of their favorite artists, such as Rüfüs Du Sol and Blackpink.

“Yeah, we haven’t killed each other,” Lichaa joked.

Selecting a “team” to quarantine with has become a way for some to escape the isolation that comes with the stay-at-home orders mandated across the United States. To avoid truly being alone, some have ditched their respective apartments or homes and moved in with friends instead.
Doing so has allowed people to still abide by the orders. But it also has provided them with in-person, human interaction that is lacking during a time when physical distancing — aka no going out or hanging out in groups — is the norm.

“I think as a society, we crave human interaction and being around people,” Lichaa said. “Pre-corona, no one wanted to go out, everyone was living on their phones, stimulated by this world that didn’t exist. It felt kind of all fake. Now you’re forced to be alone, and you realize how much you miss human interaction.”

The psychology behind it

Quaranteaming is not necessarily a surprising phenomenon, according to some experts.

Though, it’s “hard to know what to expect because none of us have ever experienced anything like this before,” C. Vaile Wright, a psychologist and director of clinical research and quality at the American Psychological Association, told CNN.

“In some ways this is a huge social experiment about how do we think about our relationships,” she said. “I think one of the interesting aspects of this pandemic is the way which we are faced with all the things we took for granted. All these really minor interactions that you never thought about before are now gone. And so we do need to replace them with something.”

People teaming up could be one “positive response” to come from the crisis.

“This is an example of how resilient people and communities can be,” she said. “This sense of really thinking about how can we in some ways unconventionally address this challenge together. You teaming up with those that you care about and approaching it (social distancing) together, and supporting each other, is a positive story that could come out of great adversity.”

However, she suggests people who do decide to move in together during this time remember to “maintain some boundaries, just as you would with any other roommates.”

Celebs get in on the act

Even some celebrities are hanging out in isolation, together.

Former “Bachelorette” Hannah Brown joined former contestant Tyler Cameron and his friends at his Jupiter, Florida, home for about a month. Brown, Cameron and their group — which includes Cameron’s brother — created a popular TikTok account called “The Quarantine Crew.”

The group began frequently posting videos of themselves doing various TikTok challenges and joking around. The account quickly grew in popularity, and now has 3.1 million likes and more than 559,000 followers.

Brown recently left the crew to travel back to Alabama to be with family, according to her social media posts. However, she still participates in videos with the crew from afar, posting some to her own separate account now instead.

For those who remain solo during the stay-at-home order — or for those who are in other undesirable living situations — the internet has made it possible to fantasize about who they could quaranteam with.

Across social media, countless people and brands began posting versions of the meme “choose your quarantine house,” in which anyone on social media could choose a “house” to shelter-in-place in based on which celebrities were in it.

Some celebrities, seemingly bored during self-quarantine, participated in the trend, commenting their thoughts on The Cut’s version of the meme posted to Instagram. The meme has even inspired a food version (the quarantine potato house) and a skincare version.

Some pack everything they need

Wilson Li, a second-year law student at University of California, Davis, decided to take up his friend Dennis’ offer to crash with him in Seattle last week rather than stay alone near campus.

Now, Li spends his days taking classes on Zoom, while Dennis works remotely. The friends, who know each other through the church they both used to attend in Los Angeles, hang out during their respective breaks, and often cook lunch or dinner together.

“It’s been going well so far,” Li said. “We’re both fairly good cooks so we’ve been able to expand the complexity of the dishes we make with an extra helping hand.”

Others find their ‘germ pod’

Some, like Ilana Master, have not fully moved in with others. Instead, the 28-year-old has created what she calls a “germ pod” with four of her friends who live about a half mile away from her in Oakland, California.

Master, who lives alone, said they see only each other amid this social distancing period.

“I think the part of this that is the most important is actually about the level of trust that is built,” she told CNN. “Like knowing we are all implicated in all of each other’s decisions, and needing to communicate and trust each other fully.”

During the day, she stays at her place, working as an organizer for the Sunrise Movement. She also sleeps at her own apartment. But she said she goes to her friends’ apartment “almost every day,” post-work and pre-sleep.

“I wouldn’t be able to do this alone without them,” she said.

Together, so far, the group has done exercise classes (which are hosted by their other friends on Zoom), made art (including a poster that reads “Thank u health workers”) and held a Passover Seder.

Wednesday night, she celebrated her 28th birthday with her pod.

“It was two of our birthdays this week,” she said. “Lots of sweet celebrations. including turning the house into ‘Miami.'”

When asked why she didn’t want to remain alone, Master’s answer was simple:

“Humans, like dolphins, need a pod,” she said. “We are social, and rely on each other, especially now.”

They feel ‘crazy’ but fortunate

Back in West Hollywood, Lichaa and Noulinthavong have moved on from their Coachella party — and gotten back to work.

Lichaa, who runs the accessory label 8 Other Reasons, has been making and selling washable, reusable masks and donating proceeds to the WHO COVID-19 Solidarity Response Fund.

Working and living together has been what they both described as “crazy” — but they said they feel fortunate to have each other. Lichaa is from Australia, and Noulinthavong is from Minnesota, so they have become part of each other’s LA family.

As far as keeping themselves entertained, the two — like many during this time — have taken to cooking and baking more.

“I can’t even tell you the last time I used my muffin trays,” Lichaa said. “And all of a sudden I’ve become like Martha Stewart.”

Tags: Quaranteaming during coronavirus: People are ditching their homes and joining their friends to avoid isolation - CNNus
Previous Post

If he wins, Biden will inherit a government in ruins. He’s already planning how to fix that