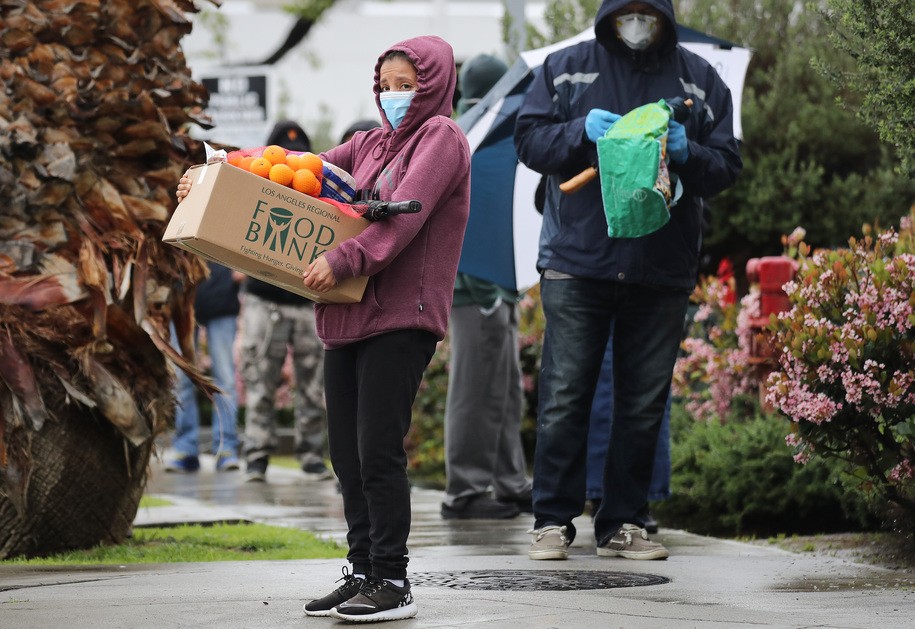 • Despite no evidence that the pandemic will be abating, Donald Trump remains eager to “re-open” the nation’s economy by May 1. That goal continues to hit snags, however, as even Trump’s much-vaunted council of business leaders say the obvious: A national reopening can’t happen until, at the very least, the nation has widespread enough testing to be able to identify just where the virus is or isn’t.

• The public at large is skeptical as well: Only 20% of Americans say they would resume normal activities “immediately” if social distancing requirements were lifted.

• Trump has been getting increasingly shrill(?) in his emphasis on a quick reopening, with his emphasis remaining more on issuing threats to and attacks on state governments that might resist such orders than on solving the required problems of testing and tracking virus transmission. “If we’re not happy, we’ll take very strong action against a state or a governor if we’re not happy with the job a governor is doing,” he claimed yesterday. “And as you know, we have very strong action we can take, including a close-down.” No, nobody knows what a “close-down” is referring to—but we can be assured it would be “strong.”

• The $350 billion in small business loans provided by the CARES Act has now been spent, says the Small Business Administration. What’s less clear is how the money was used, after Trump nullified congressional watchdog efforts.

• On Wednesday, far-right Michigan protesters closed down the Michigan capital with a “gridlock” protest against the state’s stay-at-home orders. Four Michigan residents have now filed lawsuits arguing the orders violate their constitutional rights.

• After the collapse of Trump-announced nationwide testing efforts and no apparent White House plan to go forward, the only remaining White House plan appears to be publicly gaslighting America rather than address those failures.

• Another apparent testing bungle: Rapid COVID-19 testing machines have now been delivered to the states. Not delivered: the actual test kits needed to use them.

• The decision to hold up pandemic relief checks so that they could be issued with Donald Trump’s name on them was held so secret that Treasury Secretary Steven Mnuchin left “top White House officials in the dark” about the plan until it became public.

• The Trump administration continues to take no action to prevent companies from seizing CARES Act relief payments to families to offset pass debts—thus leaving those families without means to pay rent or buy food. 25 states are now asking the Treasury Department to issue rules barring such seizures.

• Mnuchin did relent on another issue: Some disabled Americans on Supplemental Security Income will no longer have to file with the IRS in order to receive CARES Act relief.

• Through FEMA, the Trump administration reportedly has awarded a no-bid, $55 million contract for 10 million N95 masks from a “tactical training company with no experience supplying medical equipment” and with a checkered recent past.

• Unfazed by his failures, Trump continues to act with galling incompetence. He is now fixated on a now-debunked conspiracy theory claiming the virus was the product of a Chinese laboratory.

• 37 Democratic senators (and no Republicans) are calling on the Trump administration to automatically extend protections for immigrants in the Deferred Action for Childhood Arrivals and Temporary Protected Status programs as pandemic service disruptions impair their ability to renew their status.

• Following an anonymous tip, police found 17 bodies piled in a morgue on the grounds of a New Jersey nursing home. The facility was “just overwhelmed by the amount of people” dying, said the Andover, New Jersey, police chief.

• Carnival cruise line executives are being accused of taking inadequate steps to protect their passengers from the already known risks of COVID-19.

• Amazon founder Jeff Bezos has earned another $24 billion since the beginning of the COVID-19 pandemic. His workers, however, continue to fight for pandemic safety measures as employees in at least 74 Amazon warehouses have tested positive for the virus.

• California Sen. Kamala Harris is calling for an inspector general probe of an incident in which detained immigrants were required to sign a liability waiver to receive protective masks.

• Incarcerated activists are facing retaliation for speaking out about coronavirus dangers.

• Extremely stupid conspiracy theorists are setting cellphone towers on fire due to their belief that the coronavirus is actually caused by new 5G networks.

• In Britain, the temporary prime minister announced that government’s reopening plan. It is more detailed than the Trump version. Boris Johnson, however, is being blasted for his performance.

• At least 2,100 U.S. cities are expected to have “major budget shortfalls” due to the pandemic.

• On Fox News, television personality Dr. Oz called reopening the nation’s schools a “very appetizing opportunity,” claiming a study argued it might “only cost us 2 to 3% in terms of total mortality.” Oh. Okay.

• The Girl Scouts of America have opened a program allowing Americans to buy or donate cookies online. Members are also sewing masks, with a new Bronze Award project to encourage their efforts.

ANALYSIS | What we have learnt in 21 days of lockdown

Fact check: Trump wrongly declares some states don’t have ‘any problem’ with coronavirus

Fact check: Trump wrongly declares some states don't have 'any problem' with coronavirus